When breast surgeon April L. Speed, MD, of DeKalb Medical Physicians Group-Hillandale, picked up the phone to speak with a patient concerned about a breast lump, she had no idea it would lead to an opportunity to educate millions of people about breast cancer. The patient was Kenya Moore, a former Miss USA and a cast member on the Bravo reality show The Real Housewives of Atlanta, who requested that the consultation be filmed and shared with viewers to raise awareness. Dr. Speed’s appearance aired on February 10, 2013

Reality TV stars aren’t the only patients who benefit from Dr. Speed’s expertise and compassionate approach to breast care. In 2012, she received a Loan Repayment Program (LRP) Award from the Conquer Cancer Foundation of the American Society of Clinical Oncology, part of ASCO’s Diversity in Oncology initiative, which provides repayment of qualifying educational debt to oncologists who commit to practicing in a medically underserved region of the United States. “It was such a pleasure to receive this grant, and it’s made such a difference in my career. I’m able to serve a marginalized community without focusing so much on cost,” she said.

Dr. Speed recently served on the 2012-2013 Diversity in Oncology Review Subcommittee, which selects recipients for awards that attract individuals from populations underrepresented in medicine to cancer careers, which, in turn, increases access to care for underserved communities. “We had the great problem of fielding so many qualified, deserving applicants who want to give back to their communities and to our field,” she said.

AC: Why did you decide to specialize in oncology?
Dr. Speed: I liked that oncology was a field where surgeons could develop long-term relationships with patients. Not to say that you can’t do that when you take out a gallbladder, but with oncology you may treat a patient for his or her lifetime.

AC: How were you approached about participating in The Real Housewives of Atlanta?
Dr. Speed: It started out as a patient call just like any other patient call. Kenya Moore called my office seeking a second opinion about a lump in her breast; she said she’d had a less-than-ideal experience during an initial consultation in Los Angeles. She searched online and found my practice, and our phone consultation went so well that she decided to make an office appointment. She faxed over her imaging, and I was concerned by what I saw. We made an appointment for two days later, when she returned from California.

Before she hung up, she asked if she could film the consultation to educate and encourage other women. I said sure, not knowing that it would be for The Real Housewives. I’d watched the show before and knew what it was about, but I wasn’t familiar enough to know the cast members by their individual names. When she arrived that Friday with a full crew, I was nervous and excited at the same time.

I initially had some concerns that I shared with the producers before agreeing to filming. Susan Harris, Vice President of DeKalb Medical Hillandale, was very supportive and instrumental in reassuring my decision to proceed. My concern was that sometimes reality shows can embarrass the participants, and I didn’t want to minimize breast cancer or embarrass my patient in any way. Once they understood my concerns, we reached an agreement andit was a go.

I nervously watched the episode when it aired because I wasn’t sure how things would be edited. I was so pleased with the crew for maintaining the integrity of their promise, and I think they did a really good job of creating a segment that would educate people about breast cancer and shed some light on a patient’s journey.

AC: You were very poised oncamera. How did you prepare?
Dr. Speed: I’ve been filmed before for interviews about breast cancer, but never during an actual patient consultation. I didn’t do any special preparation; I just proceeded as I usually do. I really enjoy the engaging interactions I have with patients during the consultations, so once we got started the conversation was so organic it was like the cameras just disappeared.

During the biopsy I was a little nervous, primarily for the patient because there are so many moving parts to the process of having a procedure done, and everyone has to be rowing in the same direction. Now imagine having to maintain the integrity of the process while reassuring a very nervous patient all while being filmed. That adds another layer of detail. For example, unexpected findings would be televised in real time, so you can imagine that creates a little anxiety in the room. I did find an unexpected mass during the procedure, but making moment-to-moment decisions and adjusting accordinglyis what we are trained to do, so the procedure continued from therevery fluidly. 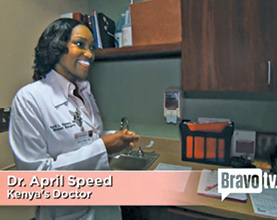 AC: Was the segment an accurate reflection of the patient experience?
Dr. Speed: It was a completely authentic experience of a woman going through that journey. Ms. Moore had three consultations, like most of our patients do: the initial consultation, the biopsy, and a results and planning session. The producers truncated those consultations to make one episode, but she went through the entire process. It was an experience that a lot of women could relate to.

I’ve since gotten a lot of calls and emails from women who aren’t my patients, but who watched the show and felt empowered to see a physician about their own health concerns. Fear of “what if?” or “what next?” discourages a lot of women from seeking medical attention. Ms. Moore humanized the issue—her fear and anxiety were very real. Sharing that private moment on TV with millions of people took a lot of courage, and it was very selfless. She thought that it would help dispel some myths and fears.

As physicians, we have to understand that patients aren’t acquiring information only in our offices anymore. Mass media is a place where people are gathering information about cancer. The responsibility is on us to not be afraid of technology, but to use it to educate people on a broad scale and help save lives.