In a past column on ASCOconnection.org, I talked about a debate that had occurred in our tumor board in which a patient had a margin <1 mm from ink. While “technically negative,” it was a little too close for comfort for me; the surgeon whose case it was, however, argued based on evidence from the NSABP B-06 trial that if a tumor did not touch ink, outcomes were equivalent to the alternative of mastectomy—at least for survival. It brought up how we interpret data—and the difference between what we know and what we think we know; or as the comedian Stephen Colbert would put it, between “truth” and “truthiness.” We like to think that what we do is “evidence-based,” but we can almost always find data to support any position we wish to take.

My two good friends, Dr. Mel Silverstein and Dr. Mike Dixon, have duked out the margins debate in many public forums and settle the score here once and for all. Here is what we know for sure: (1) obtaining negative margins reduces local recurrence rates; (2) there is no consensus on what constitutes an adequate negative margin (although many would be happy with >1 mm); (3) radiation therapy continues to play a role in breast-conserving surgery (although there may be exceptions in tiny areas of estrogen receptor-positive ductal carcinoma in situ excised with widely clear margins); (4) there are ways to take out large segments of breast tissue without compromising cosmesis (although taking out less may yield excellent cosmetic outcomes without needing a contralateral symmetry procedure); and finally, (5) for the record, Mel is not a Republican (not that it matters).

Dr. Chagpar is Director of the Breast Center at Smilow Cancer Hospital, Assistant Director for Diversity and Health Equity at Yale Comprehensive Cancer Center, Program Director of the Yale Interdisciplinary Breast Fellowship, and an Associate Professor in the Department of Surgery at Yale University School of Medicine. She currently serves on ASCO’s International Affairs Committee and is a columnist for ASCOconnection.org.

The controversy surrounds what constitutes a clear margin. The margin width is the distance from the cancer to the ink painted on the surface of the excision specimen. In surveys of surgeons and radiation oncologists, no one margin width was endorsed by more than 50% of respondents.3-5 Thus, there is no consensus, and one consequence of this is that given a distance to the nearest margin of 1 mm, some surgeons and oncologists will accept this whereas others advise re-excision to achieve a wider margin.

A major problem in the published literature is that there are large numbers of single-center series that have all used different margin widths to define what constitutes complete excision.6 This allows any individual surgeon to quote a paper that supports his or her personal view.

The first review of surgical margins was conducted by Eva Singletary, MD, and published in the American Journal of Surgery in 2002.7 What Dr. Singletary established was that leaving disease at margins was unacceptable and significantly increased local recurrence rates. She established that wider margins did not reduce local recurrence rates and concluded that some of the best local recurrence rates were in series that had used a 1- to 2-mm margin width. This was endorsed by a more recent comprehensive review and meta-analysis of 21 retrospective studies.8 This analysis included 14,571 patients with breast cancer and demonstrated that a positive margin was associated with an odds ratio for local recurrence of 2.42. If the margin width was <1 mm this increased local recurrence by 1.8 times. There was, however, no statistical difference in local recurrence rates associated when comparing margin widths of >1 mm, >2 mm, and >5 mm when studies were adjusted for the use of radiation boost and endocrine therapy. The finding of this comprehensive meta-analysis was that a 1-mm negative margin is as good as a wider margin if patients receive optimal adjuvant therapy. The conclusion was that there is no justification for demanding margins greater than 1 mm.

Some have found difficulty in believing that recurrence rates are not reduced when margins are wider. This is in part because detailed whole-breast studies have shown disease extending 2 to3 cm from the edge of the primarycancer.9 What a “clear 1-mm margin”indicates is not that there is no residual disease in the breast, but that any residual tumor burden is low and will be controlled with radiotherapy. Although mastectomy is offered to many patients, and patients choose it in the belief that this reduces local recurrence rates, mastectomy does not eliminate local recurrence. Randomized trials comparing mastectomy alone with breast-conserving surgery and radiotherapy have in fact shown similar local recurrence rates with both breast-conserving surgery followed by radiotherapy and mastectomy.10

Studies from Edinburgh in more than 1,300 patients have confirmed that local recurrence rates do not fall with increasing margin width. In breast tumors, recurrence rates also did not increase when front and back margins were less than 1 mm, provided that full thickness of breast tissue was taken and radiotherapy boost was delivered. There were in fact no local recurrences at five years in patients who had a positive deep margin even though pectoral fascia was not removed routinely.

The evidence shows that wider marginshave no benefit in breast-conserving surgery. Wider margins have an adverse effect on the cosmetic outcome. Surgeons must abandon their obsession with wide margins and accept 1 mm as sufficient. Such a change will reduce health care costs, reduce the number of women having re-excisions, improve cosmetic outcomes, and thus significantly benefit patients.

Dr. Dixon is a Professor of Breast Surgery and Consultant Surgeon, Edinburgh Breast Unit, Western General Hospital Edinburgh, UK. He currently serves on the editorial boards of Breast Cancer Management and Annals of Surgical Oncology and is Co-Chair of the Miami Breast Cancer Conference.

In 1999, my colleagues and I published a paper in the New England Journal of Medicine showing that patients with ductal carcinoma in situ (DCIS) treated by excision alone had a very low local recurrence rate (about 5% at 10 years), if clear margins of 10 mm or more were achieved.1

Following that paper and the presentation of those data at numerous meetings, word spread that I no longer used radiation therapy (even for invasive cancer), that I required 10-mm margins for all cases or I returned to the operating room for re-excision or mastectomy, and that I voted Republican. None of those were true. But somehow, erroneously, I became the guru for 10-mm margins without breast irradiation for all patients with breast cancer, both noninvasive and invasive.

So, let me set the record straight. I always recommend breast irradiation for patients with invasive cancer receiving breast-conserving therapy and for about half of my patients with DCIS. The exception, which follows NCCN guidelines,2 are patients with DCIS with small, well-excised, low-grade lesions (low University of Southern California/Van Nuys Prognostic Index scores).3-5 Moreover, I routinely accept 1 mm as a clear margin, and I do not require re-excision, if radiation therapy is going to be used. While I intuitively prefer wider margins, I’m willing to accept narrow but clear margins. With that said, can I prove that wider margins are better?

I admit that in 2001, while giving the Keynote Lecture at the American Society of Breast Surgeons Annual Meeting, I did say, “Margins are like money. More is better.” I still feel that way, but Mike Dixon is right. I cannot prove that 2 mm is better than 1 mm, nor that 3 mm is better than 2 mm. I cannot prove an incremental benefit because the precise measurement of margin width was not common until recently, and the prospective, level I evidence that would be required to prove an incremental benefit simply does not exist. Nevertheless, wider margins make sense, and most surgeons and radiation oncologists would prefer a wider margin, if there were no cosmetic cost.

For patients with DCIS treated with excision alone (no radiation therapy), wider margins correlate with less residual disease and a lower local recurrence rate.6-8 Those benefits may not be so apparent for patients with invasive cancer because the value of wider surgical margins is blunted by both radiation therapy and the addition of other adjuvant treatments.

I do not want wider margins at significant cosmetic cost. What I do want is wider margins and better cosmesis. I want both. In support of that, and dating back to the 1980s and the Van Nuys Breast Center, I have always been a champion of oncoplastic breast conservation. I have always trained residents and breast fellows to believe that the appearance of the breast after breast preservation is important and that it should be equal or better than before the initial excision, if possible.

Gains from wider excisions
In an attempt to understand what is gained by wider excision, my colleagues and I recently analyzed 100 consecutive excisions using a simple ellipse and compared those cases with 100 consecutive excisions using an oncologically designed reduction mammoplasty, in which a larger amount of tissue could be removed while achieving a better cosmetic result.9 The data are outlined in the Table below: 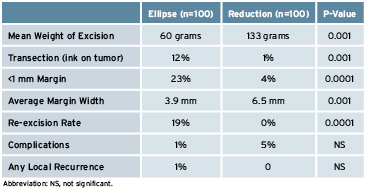 Figure 1 shows a woman with a large upper central left breast cancer. She would have been deformed with a standard excision, or, more likely, she would have been treated with a mastectomy and her reconstruction compromised by post-mastectomy radiation therapy. The use of neoadjuvant chemotherapy followed by an oncoplastic split reduction excision and radiation therapy yielded widely clear margins and a far superior cosmetic result (a win-win: wider margins and better cosmesis). Her long-term survival will be equivalent to standard lumpectomy or mastectomy, and she will be a far happier patient.

A reduction excision offers additional benefits. When clear margins are achieved during the first operative procedure, re-excision or conversion to mastectomy is eliminated, resulting in substantial cost savings and the elimination of the additional psychic trauma of a second procedure. The removal of excess breast tissue from the contralateral breast, while achieving symmetry, also appears to lower the overall risk of a future contralateral breast cancer.10,11

I cannot prove to you that wider excision leads to a lower local recurrence rate when radiation therapy and modern adjuvant treatment is given, although I believe that it does, in a small fraction of patients; but it clearly leads to fewer re-excisions and fewer mastectomies. However, if wider excisions affect your cosmetic results negatively, then I agree, you should not be doing wider excisions. Perhaps you should not be doing breast surgery. After all, it is 2013.

Dr. Silverstein is Director of the Hoag Breast Program at Hoag Memorial Hospital Presbyterian, and Clinical Professor of Surgery at the Keck School of Medicine, University of Southern California. He has served on ASCO’s Scientific Program Committee.

Thank you for the nice review. Most references quoted involves patients treated 10 years or earlier and some large meta-analysis data. We need to remember that breast cancer care continuum is changing rapidly and constantly. Now we do more breast MRIs and MRI guided biopsises which can detect multifocal disease more frequently. There is also increasing use of partial breast radiation therapy despite the lack of consensus. The data quoted may not differentiate local recurrence versus recurrence from another focus/foci left behind and was not properly treated by radiation because of the partial breast irradiation. It would be nice to know how much of the recurences were true local recurrence versus growth of tumor from another focus left behind.