February is National Cancer Prevention Month, a time to spread important information on the lifestyle factors that can help reduce the risk of cancer for Americans across the U.S.

Recently, ASCO’s annual 2018 National Cancer Opinion Survey (NCOS) found that Americans feel most cancers are caused by lifestyle choices (33%) and increasingly environmental factors (10% in 2017 vs. 12% in 2018). The NCOS was established by ASCO, in collaboration with The Harris Poll, to track the U.S. public’s views on cancer research and care. The survey is designed to be conducted annually to measure shifts in the public’s perceptions of a range of cancer-related issues over time.

The survey has also revealed that Americans’ knowledge of known cancer causes does not mean that they are taking proper prevention measures. In 2018, smoking, family history, and use of other tobacco products were the most commonly reported perceived cancer risk factors in the NCOS, yet only a percentage of those surveyed are acting to reduce their risks in these areas. For example, while 62% saw sun exposure as a risk factor, only 48% reported using sunblock.

In addition, some misperceptions about cancer risk persist. In 2017, 14% of Americans incorrectly identified cell phones as increasing the risk of cancer, and 8% incorrectly identify caffeine as a risk factor for cancer in the NCOS.

ASCO is committed to promoting prevention science and integrating evidence-based prevention strategies into oncology practice. ASCO continues to publish prevention information and resources for providers and people with cancer as a part of the Society’s prevention goals—to promote clinical, behavioral, and translational research and education and train in cancer prevention and control. 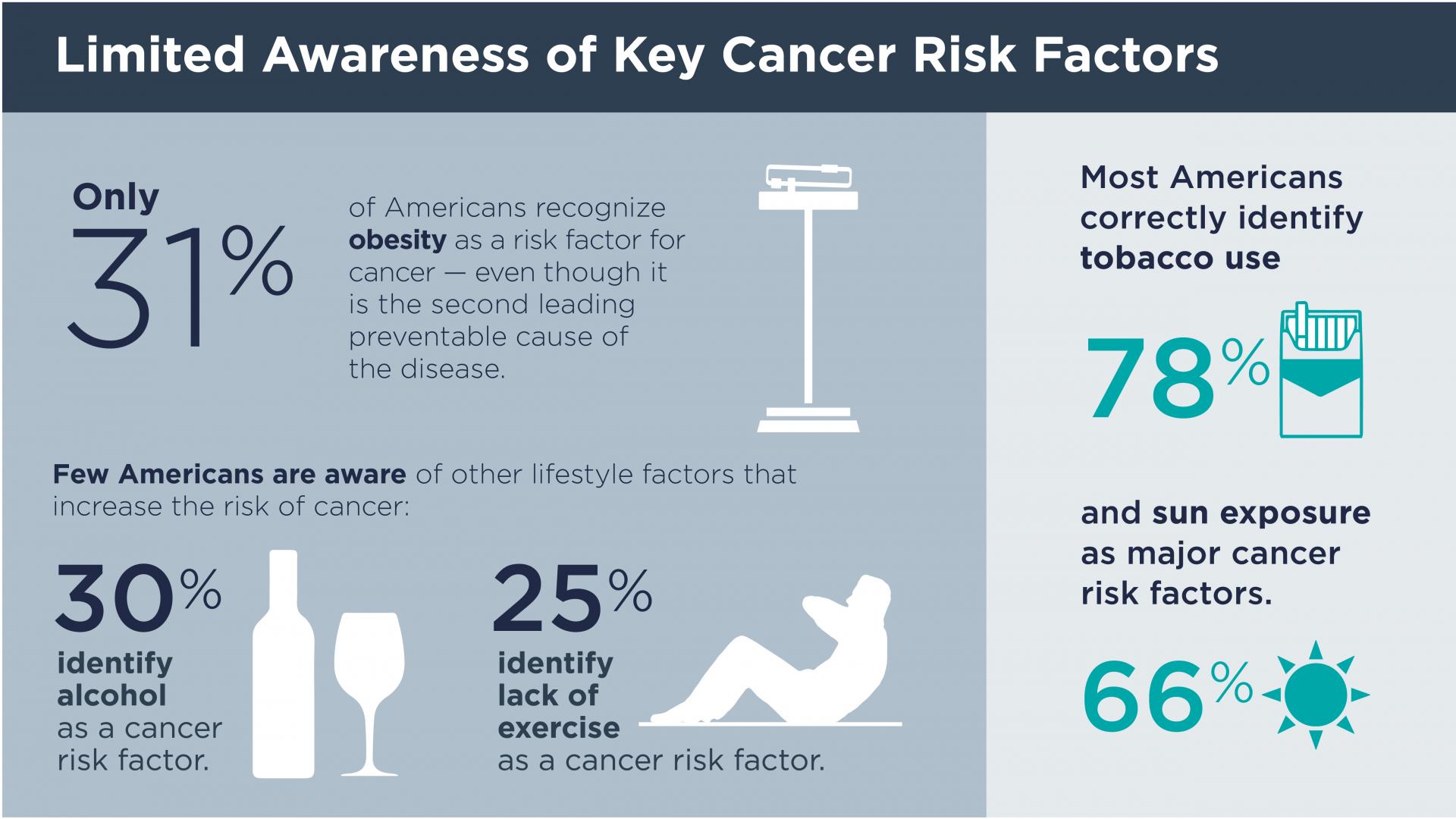 The majority of Americans are unaware of several major risk factors for cancer—most notably obesity, which will soon overtake smoking as the largest preventable cause of cancer in the United States.¹

The 2017 NCOS found that less than a third of Americans (31%) realize that obesity is a risk factor for cancer, even though it is currently the second leading preventable cause of the disease. In fact, a higher body mass index is associated with increased risk of several cancers, including colon, breast, high grade prostate, and uterine cancers.  According to a recent analysis by the National Cancer Institute (NCI), if the current rates of obesity continue to trend upward, by 2030 there could be about 500,000 additional cases of cancer in the U.S. than would otherwise be expected.

In recent years, ASCO has worked to address obesity in relation to cancer prevention efforts, as a potential factor in new cancer cases, and as a complicating aspect in care. ASCO’s Obesity Initiative is currently focused on forging collaborations with groups within and outside of the oncology field to increase the education of medical professionals, raise public awareness of the negative health consequences of obesity. Effective interventions for healthy weight management can help to reduce the burden of cancer. and find effective strategies for weight loss to reduce the burdens of cancer.

In 2017, ASCO issued a statement  on alcohol and cancer aimed at drawing attention to alcohol consumption as a contributing factor to the overall cancer burden. ASCO cites between 5% and 6% of new cancer cases and deaths globally as being directly attributable to alcohol. This is particularly concerning as the 2017 NCOS found that 70% of Americans do not recognize drinking alcohol as a risk factor for cancer.

Further, alcohol did not make the list of top five most commonly known risk factors for both the 2017 and 2018 NCOS. The 2018 survey revealed that while one in three younger Americans know alcohol is a risk factor, only about one in four adults age 54+ say the same.

Listen to a Cancer.Net podcast with ASCO Expert Noelle LoConte, MD, on the connections between alcohol and cancer.

Each year, 660,000 Americans are diagnosed with a smoking related illness and 343,000 people die from cancer related to tobacco use.² Cigarette smoking alone causes 11 different types of cancer (acute myeloid leukemia and cancers of the lung, oral cavity, esophagus, stomach, liver, pancreas, kidney, bladder, colorectum, and uterine cervix) and causes 30% of all cancer deaths in the United States.³

Research shows that individuals with cancer who continue to use tobacco during their cancer treatment have more negative side effects, higher rates of cancer recurrence, and shorter survival than non-users. Growing evidence also suggests tobacco use by patients with cancer can complicate a wide variety of treatments, including radiation therapy, chemotherapy, and surgery.

ASCO has led many efforts to regulate and limit the sale of cigarettes and other tobacco products and increase smoking cessation. The Society is committed to providing oncology providers with the evidence-based and practical information they need to successfully integrate tobacco cessation activities into their practices.

As a part of this commitment, ASCO supports policies that will contribute to the reduced the use of Electronic Nicotine Delivery Systems (ENDS) to prevent the occurrence of cancer and other smoking-caused diseases and commends the FDA for its recent actions in this area. In the absences of clear data on ENDS aid to cessation, ASCO recommends the use of proven smoking cessation medications such as nicotine replacement therapies, bupropion, and varenicline. Additionally, behavioral counseling paired with cessation medication has been associated with increased cessation.4

Read ASCO’s updated policy statement and resources on tobacco cessation and stay up-to-date with the latest tobacco news with ASCO in Action. 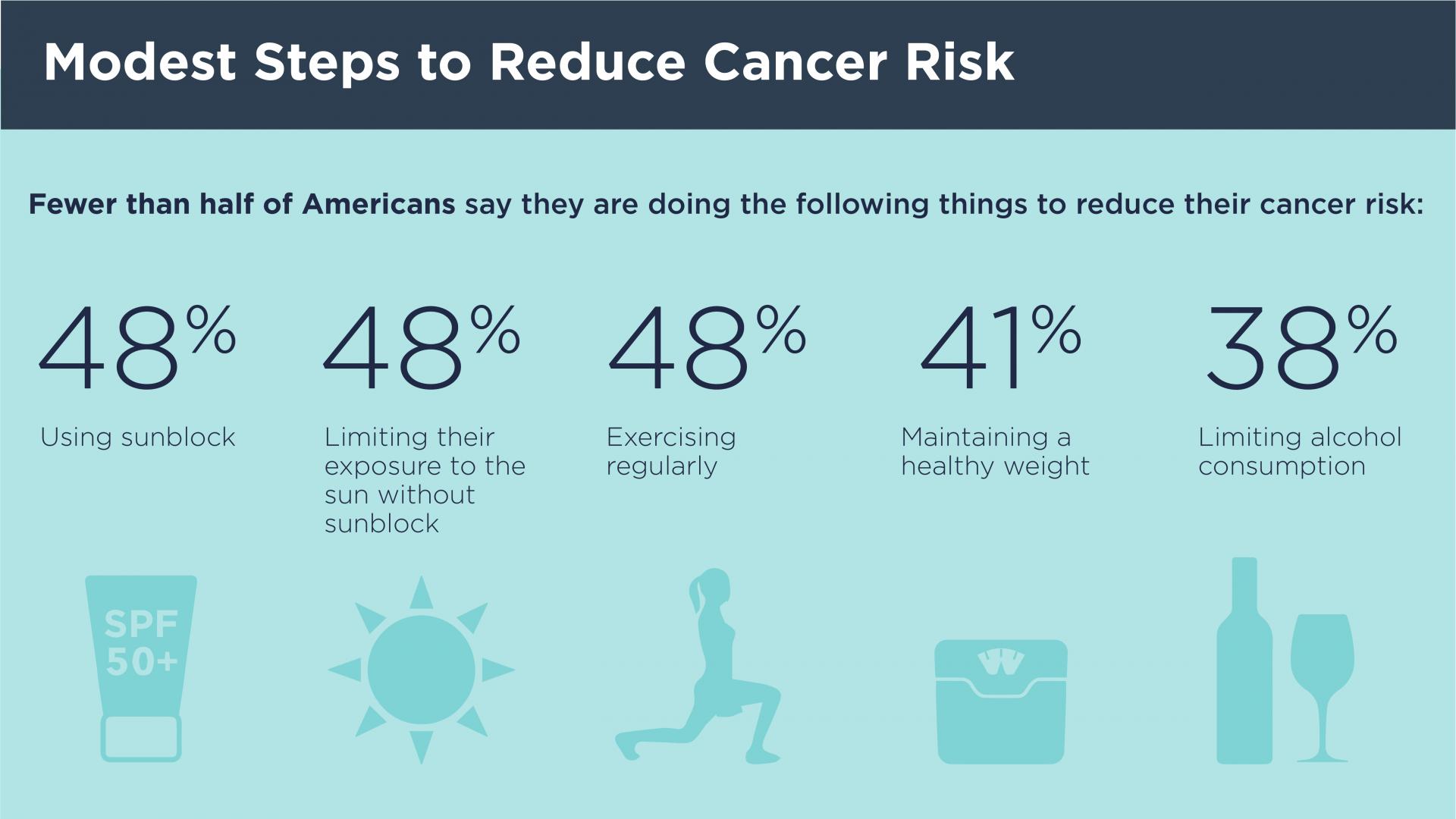 Approximately 5% to 10% of newly diagnosed cancers are genetically inherited. ASCO has a broad set of initiatives designed to improve the quality of preventive and therapeutic care for people with cancer, and family members who are at hereditary risk for cancer.

Currently, ASCO is focused on familial risk assessment and management through provider education, physician tools, and resources. The Society has developed an online genetics toolkit that provides oncology professionals with the tools and resources to assist them in effectively integrating hereditary cancer risk assessment into practice. In addition to the toolkit, ASCO has also published a Policy Statement and ASCO Expert Statement in this area.

People with cancer and their families can learn more about genetic testing for cancer risk through resources on Cancer.Net.

Cervical cancer is the most prevalent HPV-related cancer, and the fourth most common cancer in women worldwide; HPV types 16 and 18 are responsible for approximately 70% of cervical cancer cases. 5

ASCO strongly supports use of the HPV vaccine to reduce the risk of cancer. In April 2016, the Society issued a policy statement supporting the recommendation to markedly increase the proportion of young boys and girls receiving the HPV vaccine in the United States and worldwide because research has shown that it is most effective in preventing cancer. Additionally, in March 2017, ASCO issued an evidence-based clinical practice guideline on the use of the HPV vaccine for preventing cervical cancer aimed at physicians in various resource settings around the world.

Learn more about HPV and Cancer on Cancer.Net.

Exposure to ultraviolet (UV) radiation also plays a major role in the development of skin cancer. In addition to exposure from sunlight, UV radiation exposure from indoor tanning is a cause of malignant melanoma.

Cancer.Net offers in-depth information on the factors that increase the chance of developing both melanoma and non-melanoma skin cancer.