Last year, I wrote about differences in how professional societies use social media during annual meetings. This year, the American Urological Association (AUA), American Society of Clinical Oncology (ASCO) and American Society for Radiation Oncology (ASTRO) have had their meetings, so it’s time to take another look. Looks like the growth trend continues for sharing research and specialty-specific information in cancer care via social media.

Using Symplur’s hashtag analytics, I reviewed Twitter data for ASCO and ASTRO annual meetings from 2012 through 2014. I chose to include one week before and two weeks after the meeting since discussion typically extends beyond face-to-face conferences.

Symplur had data for #AUA13 and #AUA14. #URO12 wasn’t in Symplur so I reviewed it manually on Twitter. 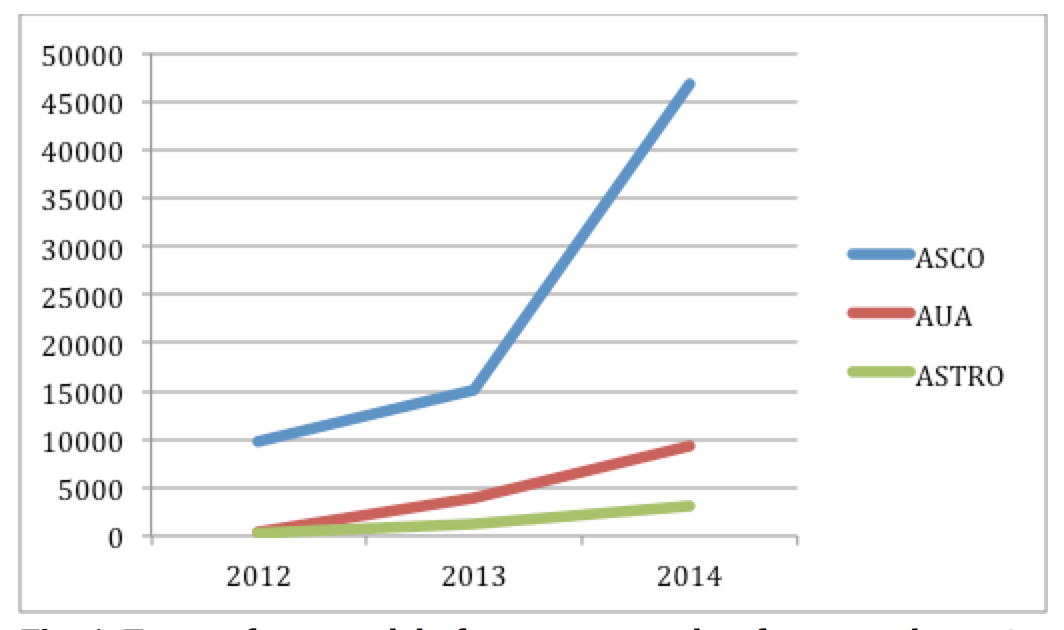 ASCO, which has been ahead of the pack for professional societies using social media, has shown continued strong growth in using Twitter. The increase in tweets mirror the increasing number of participants: 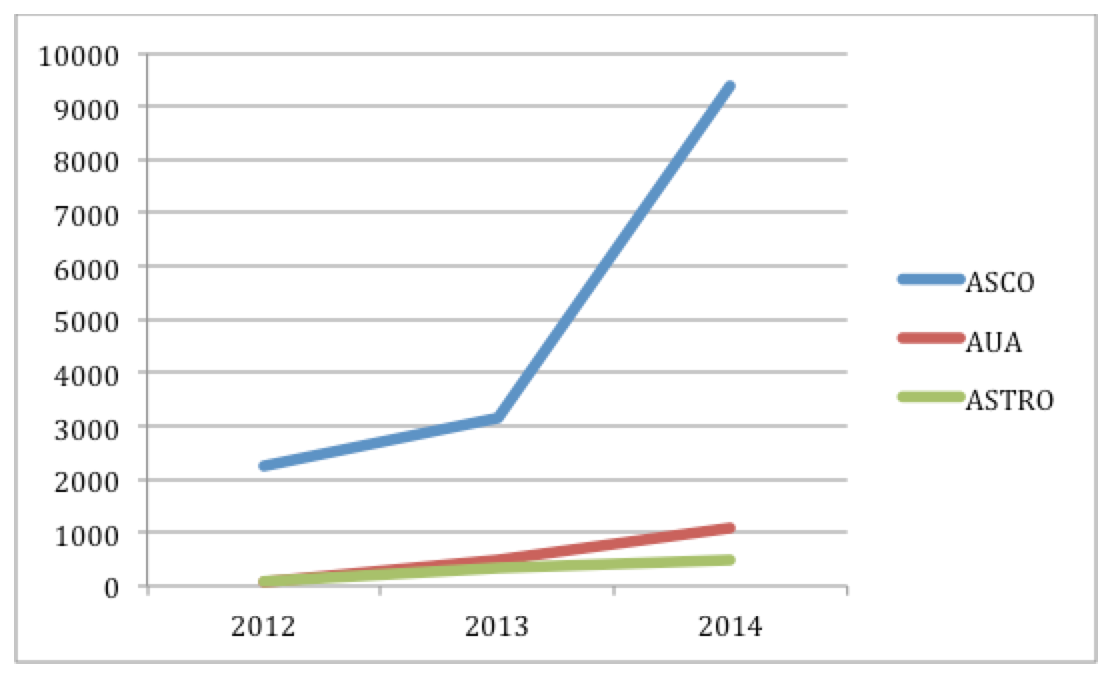 On an absolute scale, ASCO is the leader, but note that it has been strategically using social media longer than either AUA or ASTRO. And how are those organizations doing based upon growth rates? Pretty well. 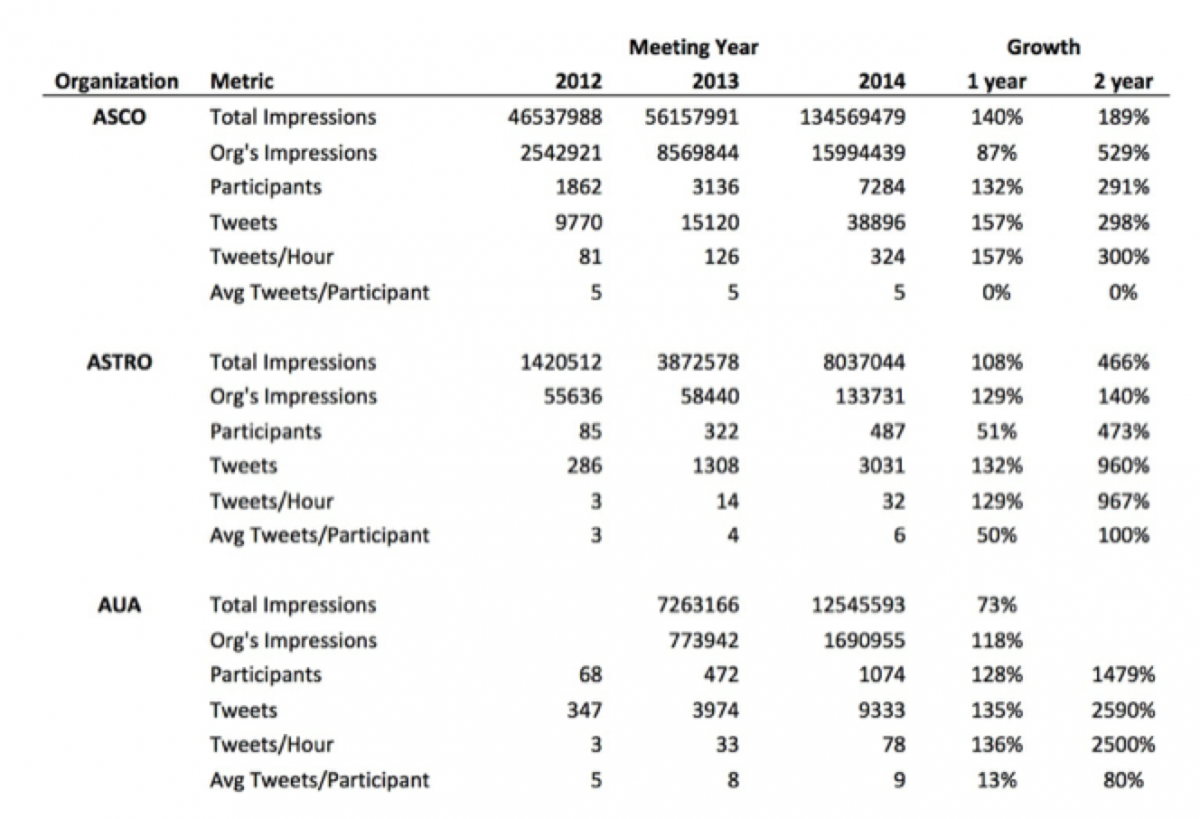 AUA used #URO12 because a competing meeting was already using #AUA12, but #URO12 apparently wasn't intuitive enough. Meanwhile, ASTRO appears to be lagging approximately one year behind AUA in most measures. Both organizations’ meetings had an increasing number of tweets per participant. ASCO’s Twitter use has been flat.

To what extent do the organizations themselves play a role in advocating Twitter activity?

ASCO, ASTRO and AUA have all grown their online presence with Twitter. But ASTRO hasn't been as proactively tweeting at its own meeting as either ASCO or AUA.

In 2014, ASTRO had only 35 tweets using the meeting’s hashtag vs. 754 and 381 for ASCO and AUA, respectively. So far that doesn't appear to be hurting ASTRO’s growth in using its annual meeting hashtag. But is organizational engagement needed to sustain that growth, or are people going to increasingly use Twitter on their own?

ASCO is a very large organization with over 34,000 members, so I wouldn't expect either AUA or ASTRO to reach quite the same level of participation. But both urology and radiation oncology appear to be on the same path – sharing more cancer information online.

This post originally appeared on the Mayo Clinic Social Media Health Network and is reprinted with their permission.

Matt - Great post. Interesting as we were looking at #ASH13 and #ASH14 data. RE: questions (You likely know many of my thoughts on this, but...)

So, is sharing at academic meetings trending good, bad or meh? Good.

Should organizations proactively lead tweeting during meetings? I like organicly driven, but with some structure -- such as your hashtag suggested tags. eg: http://www.asco.org/about-asco/social-media, ow.ly/uKFsG, and ow.ly/uKFJL

Should organizations let this grassroots process be initiated by meeting participants? I think organizations (ASCO, ASH, AACR, etc) should have some presence, but not try to dominate it. As far as I can tell the blend in the meetings I attend is working relatively well and uptake is increasing.

Adoption of a High-Impact Innovation in a Homogeneous Population – 10/15/14 - Weiss et al. Phys. Rev. X http://ow.ly/FFpsX
"..model allows individuals to persuade each other to become for or against an innovation"
CON material:
A Randomized Trial of Social Media from Circulation [11/18/14] - Fox et al. @CircAHA http://ow.ly/EEWzw
Not cancer, but lack of benefit for sharing data may have crossover implications...
Conclusion—A social media strategy for a cardiovascular journal did not increase the number of times an article was viewed. Further research is necessary to understand the ways in which social media can increase the impact of published cardiovascular research.