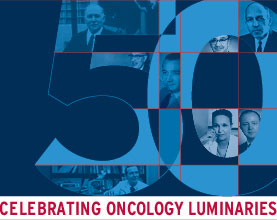 In celebration of the Society's 50th anniversary, ASCO Daily News, the official news source of the ASCO Annual Meeting, will be producing a special supplement highlighting elements of this milestone, as well as profiling oncology luminaries as identified by ASCO leadership. These profiles celebrate the contributions of more than 50 individuals who have directly or indirectly advanced scientific progress and patient care.

ASCO Connection is pleased to present a preview of the Oncology Luminaries series, including profiles of the Society's original seven founders; Dr. Sidney Farber; and Dr. David A. Karnofsky.

The 50th Anniversary Supplement with the complete list of 50-plus luminaries will be distributed with ASCO Daily News on the first day of the Meeting, as well as in select locations throughout the duration of the Meeting.

The year 2014 will celebrate the 50th anniversary of the founding of ASCO. During this celebration, it seems only appropriate to highlight the founders of the Society as part of ASCO's series of articles discussing the Luminaries of Oncology.

In 1964, seven members of the American Association for Cancer Research (AACR) recognized the need to create a new society that would focus solely on issues unique to clinical oncology. Turning the focus from pathology and research, ASCO would be dedicated to emphasizing clinical considerations and patient care.

The 1960s were the early days of the use of chemotherapy for the treatment of cancer, and oncology was a fledgling field of medicine. At that time, Arnoldus Goudsmit, MD, PhD, FASCO, and Fred J. Ansfield, MD, FASCO, were both early pioneers of the use of chemotherapy and sought to learn as much as possible about the use of these anticancer drugs; however, they found that information and educational opportunities were lacking. Presentations and research shared each year at the meetings of AACR were focused more on pathology and less on patients.

Dr. Goudsmit and Dr. Ansfield are considered to be the driving forces behind the founding of ASCO. Dr. Goudsmit noted that "many of these medical, or clinical, oncologists—as they are coming to be known—are finding it very difficult to become and keep themselves suitably acquainted with all significant and pertinent information . . . within this field."

During those early meetings, each founder was tasked with a responsibility to aid in the establishment of their new Society. Dr. Goudsmit was responsible for drafting the Society constitution and bylaws, documents that shaped the early mission of the Society and which are still reflected in its work today. Early drafts of the founding documents reflect some debate about the Society's name, with Dr. Goudsmit proposing that it might be called the American Association of Clinical Oncologists. Ultimately, and after much debate with consulting physicians about the inclusion of the word "clinical," the founders decided on the American Society of Clinical Oncology.

Dr. Freckman was responsible for organizing a membership committee and recruiting new members. Although doubt was expressed about the need for such a society among some of the physicians approached, 51 physicians attended the first meeting of charter members held in November 1964, where they ratified the constitution and bylaws.

Addressing those members, Dr. Goudsmit re-emphasized the importance of establishing ASCO, saying, "A society of clinical oncology, as sketched, when operative, has the potential of becoming the means for advancing and disseminating medical knowledge and contributing greatly to the improved diagnosis, treatment, well-being, and longevity of hundreds and thousands of fellow citizens with neoplastic diseases and to aid in the prevention of many others."

A meeting of minds

As his initial responsibility, Dr. Wilson was put in charge of proposing a budget that would address the creation of a Society journal and other educational initiatives. Among those initiatives was an annual meeting, first conceptualized by Dr. Bisel who suggested that "one full day. . . be held annually for scientific meeting." Dr. Talley developed a comprehensive list of contemporary drugs and their application to the treatment of cancer and used this information to develop scientific programming for this annual meeting and other educational initiatives.

The first scientific ASCO Annual Meeting, during which Dr. Bisel presided as the Society's first president, was held in 1965 in Philadelphia with more than 70 members and invited guests, and it featured three presentations on leukemia and multiple myeloma.

At this meeting, and many others in those early years, Dr. Wright served as the Secretary-Treasurer, a position she held until 1967. Dr. Wright was the only woman and African American among the group of ASCO founders and was the last surviving member—she died in early 2013 at the age of 93. In addition to her contribution to establishing the Society's core mission and growing its membership, Dr. Wright dedicated her career to scientific investigation with a focus on patient care. In recognition of her contribution to research on cancer chemotherapy, ASCO and the Conquer Cancer Foundation established the Jane C. Wright, MD, Young Investigator Award in 2011.

More work to be done

With ASCO's membership having grown to more than 35,000 in the last 50 years, the Society has certainly held true to the vision first set out by its founders, all of whom continued to dedicate their careers to the treatment of patients with cancer.

ASCO and its members have made tremendous strides in the development of breakthrough treatments for cancer. Looking to the future, the Society will dedicate itself to seeing through its founders' vision and to harnessing breakthroughs in technology and molecular biology to continue to learn from and achieve better outcomes for patients every day. 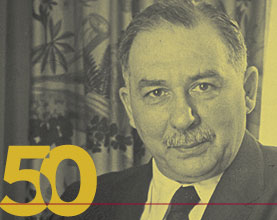 Considered by many to be the father of modern chemotherapy, Sidney Farber, MD, contributed a range of accomplishments to the field of oncology that extend far beyond the laboratory. During his 40-year career, Dr. Farber completed groundbreaking work in the field of pathology, identified lipogranulomatosis, worked to make cancer treatment a national priority, served as president of the American Cancer Society (ACS), and acted as a devoted mentor and teacher.

However, Dr. Farber's greatest achievements were made in the area of pediatric oncology and his establishment of the Children's Cancer Research Foundation—known today as the Dana-Farber Cancer Institute—which was, at the time, the first institution devoted entirely to the care of children with cancer.

Dr. Farber had a vast commitment to the idea that more could be done to help find treatments for childhood cancers, particularly leukemia. Earlier research had shown that using a folic acid concentrate inhibited sarcoma growth in mice. This piqued Dr. Farber's interest, and he and colleagues began a trial to treat patients with different malignancies with folic acid concentrates. However, instead of inhibiting disease, the treatment accelerated leukemia.

Dr. Farber then hypothesized that folic acid inhibitors might work to arrest the growth of leukemic cells. Dr. Farber put this theory to the test in November 1947 when he administered a series of folic acid inhibitors to 16 children with leukemia and achieved temporary remissions in 10. He published his results in 1948 in The New England Journal of Medicine.

Although the research was initially viewed with skepticism, it served as a starting point for the future of chemotherapy research in pediatric and adult patients.

In 1947, Dr. Farber's accomplishments caught the attention of the Variety Club of New England, a charitable organization formed by entertainers, who offered the financial support to help start the Children's Cancer Research Foundation. Soon after, the radio program Truth or Consequences introduced a young patient with cancer named "Jimmy," who had responded to Dr. Farber's treatment. Jimmy's story prompted an onslaught of donations to the Children's Cancer Research Foundation, which was soon renamed The Jimmy Fund. Continued support of the fund allowed Dr. Farber to open the Jimmy Fund Building in 1952.

At these institutions, Dr. Farber worked to establish a system of total care for patients. He felt it was important to look after patients' physical and emotional needs, and he wanted to provide clinical care, nutrition, social care, and counseling all in one place.

In 1955, Dr. Farber again contributed to pediatric cancer care when he discovered that actinomycin D was an effective treatment against Wilms' tumor.

In his later years, Dr. Farber began working to make cancer care a national priority. During his term as ACS president, he focused on expanding clinical trials of cancer prevention, diagnosis, and treatment. Dr. Farber lived to see President Nixon pass the National Cancer Act of 1971, designed to strengthen the role of the National Cancer Institute to more effectively fight cancer.

Dr. Farber died of a heart attack in his office in March 1973. The next year, the Children's Cancer Research Foundation was renamed in his honor as the Sidney Farber Cancer Center. 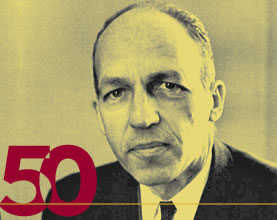 ASCO recognizes Dr. Karnofsky as one of its 50 Luminaries of Oncology for his outstanding contributions to the field.

David A. Karnofsky, MD, is considered among the oncology world to be one of the pioneer medical oncologists, devoting his 30-year career to the successful use of chemotherapeutic agents to treat cancer. Dr. Karnofsky was an accomplished physician, scientist, and clinical investigator, credited with bringing scientific discipline to the field of oncology.

Dr. Karnofsky received his medical degree in 1940 from Stanford University. In the early years of his career at the Collis P. Huntington Memorial Laboratory at Harvard University, he became interested in clinical cancer research. This interest was further fueled by experiments he conducted during World War II as part of the Army Chemical Warfare Service under commanding officer Cornelius Packard Rhoads, MD. While in the army, Dr. Karnofsky spent months examining the effects of mustard gas on goats. It was during these experiments that Dr. Karnofsky first became interested in the use of nitrogen mustard as an anticancer treatment, and he was temporarily assigned to Memorial Hospital to examine its clinical effects.

Later, Dr. Rhoads invited Dr. Karnofsky to be a member of the newly formed Sloan-Kettering Institute unit, where the focus would be the clinical application of successful biochemical and animal studies.

Dr. Karnofsky remained at Memorial Hospital throughout his career, where he played a pivotal role in the development of numerous early chemotherapeutic agents, including the first oral alkylating agent triethylenemelamine, azaserine, L-asparaginase, and purine, glutamine, and pyrimidine antagonists.

Dr. Karnofsky's name might be most well known today for his creation of the Karnofsky Performance Status Scale, which he developed in 1948 with Joseph H. Burchenal, MD, of the Sloan-Kettering Institute. The scale was created in an attempt to evaluate the results of chemotherapy in a more objective manner.

When describing the need for the performance status scale, Drs. Karnofsky and Burchenal wrote, "It is a numerical figure, in terms of percentage, describing the patient's ability to carry on his normal activity and work, or his need for a certain amount of custodial care, or his dependence on constant medical care in order to [survive]."

Dr. Karnofsky died of lung cancer in August 1969. After his death, a group of Dr. Karnofsky's friends donated money to a fund dedicated to financing an award and lecture at the ASCO Annual Meeting. First presented in 1970, the David A. Karnofsky Memorial Award and Lecture honors Dr. Karnofsky by recognizing an oncologist who has made outstanding contributions to cancer research, diagnosis, and treatment.

In 1970, his friend and colleague Dr. Burchenal honored Dr. Karnofsky's work with an obituary in Cancer Research, writing, "Dave was a fountain of ideas, stimulating all those around him to new and better research while constantly helping them with wise counsel to be critical of their own results. One of his most important contributions to cancer research was in the training of young investigators in the science of chemotherapy, thereby improving immeasurably the stature of medical oncology. Literally hundreds of physicians in this country and abroad are following the precepts he taught them."