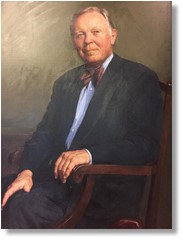 A pioneer of the academic discipline of oncology, Albert H. Owens Jr., MD, FASCO, of Johns Hopkins Sidney Kimmel Comprehensive Cancer Center, passed away on Friday, January 13, at age 90. Dr. Owens was a leader for ASCO, serving as president of the Society from 1978 to 1979, and was elected as a Fellow of ASCO in 2007.

“Dr. Owens was one of the ‘founders’ of oncology as we know it today; having been in the medical field when the word was just starting to be commonplace,” said ASCO CEO Clifford A. Hudis, MD, FACP, FASCO. “He was an early promoter of quality cancer care and an influential president during ASCO’s early years of rapid growth.”

Among his accomplishments in the field of oncology, Dr. Owens is best known as the founder of the Oncology Center at Johns Hopkins. Prompted by the signing of the National Cancer Act of 1971, Dr. Owens worked with a group of colleagues to establish a comprehensive cancer center in Baltimore. He envisioned this hospital as one that would dedicate itself to the treatment and research of cancer alone, a new concept for the time. His dedication to this cause came to fruition in April 1977 when the Oncology Center at Johns Hopkins opened. As the founder of the Oncology Center, Dr. Owens dedicated himself to translating the research done there into meaningful changes in patient care.

In announcing his passing to the Johns Hopkins community, their leaders shared that Dr. Owens was born in Staten Island, New York, and received his undergraduate degree from The Johns Hopkins University. He later earned his medical degree from the School of Medicine in 1949, then joined its faculty in 1956. He was also a medical officer in the U.S. Navy during the Korean War. Renowned and well-respected in his field, Dr. Owens served as president of the Maryland division of the American Cancer Society in addition to his service as president of ASCO. He is survived by his wife, Sally W. MacConnell; children Albert Henry Owens III, Elizabeth Ann Owens, David Tilden Owens, and Sarah Louise Owens; and five grandchildren.

According to a Johns Hopkins biography, Dr. Owens “consistently pushed the limits—always willing to explore something new or untried. It was this cutting-edge philosophy that quickly earned the Oncology Center (as it was called at the time) its lasting reputation as one of the finest university-based cancer centers in the world.”