Launch of the Bhutan Cancer Registry: Experiences, Progress, and Future Challenges in a Lower-Middle Income Country

I have had a wonderful experience working with ASCO’s International Cancer Corps to start the Bhutan cancer registry. Bhutan is a lower-middle income country, with a small population of around 738,000 people (as of 2011), bordering India and China. As of 2011, Bhutan had 31 hospitals, with Jigme Dorgi Wangchuk National Hospital (JDWNRH) serving as the main referral hospital. While the burden of cancer affects all countries, high-income countries have the capacity and resources to establish comprehensive cancer control programs, whereas low and middle-income countries have limited resources to develop such programs. Cancer is estimated to be within the top 10 leading causes of mortality in Bhutan, although actual incidence and mortality are unknown since the country has lacked a surveillance system and cancer registry. In addition, Bhutan did not have any systematic reporting or cancer prevention system.

In 2009, ASCO joined with Health Volunteers Overseas (HVO) to create the International Cancer Corps (ICC), designed to provide oncologists with opportunities to volunteer their time and expertise in countries, such as Bhutan, with a high level of need in cancer care. In November 2013, I joined the ICC volunteer team along with Jeffrey Menashe, MD,  of Compass Oncology, in Eugene, Oregon, to help establish the cancer registry in Bhutan. The work to build the cancer registry began at JDWNRH, which treats almost 70-80% of cancer cases in Bhutan. CanReg5 software from the International Association of Cancer Registries (IACR) was used to restore the registry data.

The cancer registry was established after consultation with various stakeholders in Bhutan. Attendees at the consultation meeting included Nima Wangdi, the Health Secretary from the Ministry of Health, Royal Govt. of Bhutan; the Medical Superintendent of JDWNRH; and the managers of the Medical Records Department at JDWNRH, including JDWNRH oncologists Tashi Tendup, MD, and Ugyen Tsomo, MD. During the consultation meeting, I highlighted the importance of having a cancer registry and answered many technical questions. The presentation was well received by the Health Secretary as well as by all the decision-makers, who were very positive about starting the cancer registry. Subsequently, I met with Dr. KP Tshering, President of the University of Medical Sciences Bhutan, regarding the promotion of health research and the improvement of evidence-based decision making in health care services. As part of the efforts to launch the registry, a cancer registry advisory board was established, which included members from the Ministry of Health and a physician and pathologist from the National Referral hospital. 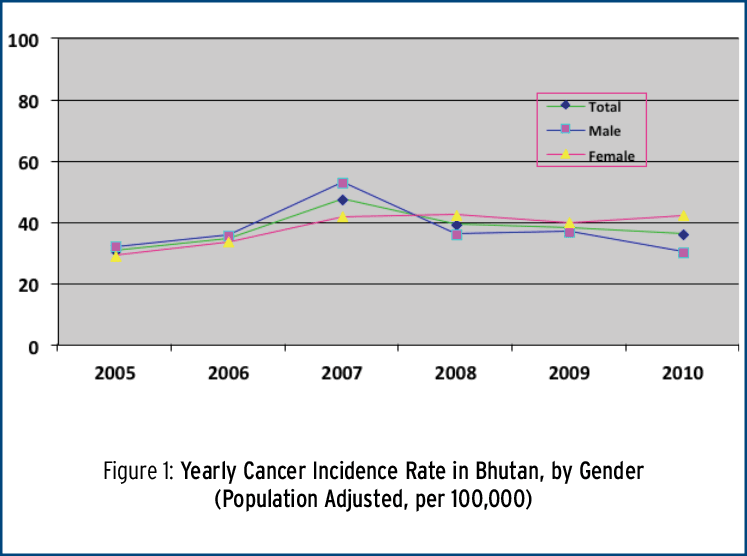 Several steps were taken to implement the registry. First, a dummy registry was created. Then, CanReg5 fields were modified and variables were added based on Bhutan’s health and demographic data sources. After testing the dummy registry, a few fields were modified on the actual registry. At that point, all of the incidence cases from JDWNRH for the years 2005–2010 were entered into the registry. Further, data for the years 2011 and onwards are now being under process.

Findings from the Analysis of the Cancer Registry

Currently, around 2000 cancer incidence cases from January 1, 2005 to December 31, 2010, are entered into the cancer registry. Analysis of the registry data showed that cancer incidence in Bhutan has generally been increasing over the past years. 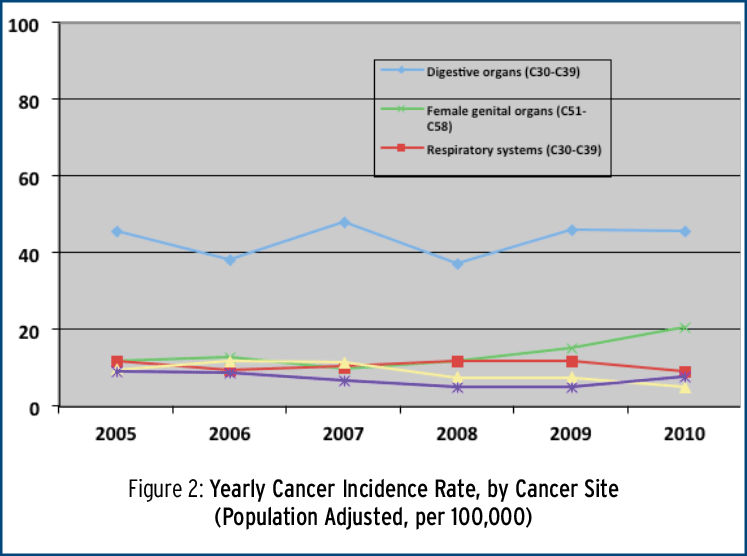 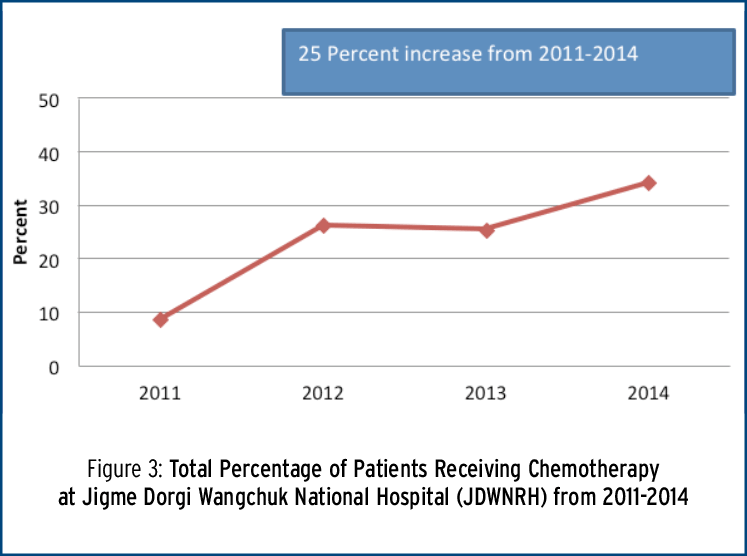 Looking ahead to the future of the cancer registry

By taking small steps, we have been able to successfully launch the cancer registry and lay a good foundation for the future. However, we recognize various future challenges to extending the population- based registry. Funding resources and trained staff are urgently needed. Also, we need to encourage the advisory board to continue to work on the cancer registry and to value HVO efforts. Furthermore, the credibility and sustainability of the registry depends upon maintaining quality data, establishing policies for using data, fostering international collaboration, and winning support from the  Ministry of Health. External funding and resources are required to enhance the population-based registry.

In summary, working with the International Cancer Corps, HVO, officials from the Bhutanese government, and members of the advisory board to establish Bhutan’s first cancer registry has been a wonderful experience for me. I feel honored to have contributed to an initiative that can help to better plan and improve care for patients with cancer in Bhutan. Looking ahead, it will be important to create new policies, conduct research, and constantly re-evaluate the program in order to maintain the quality of the cancer registry.

Narhari Timilshina, is a researcher at University Health Network, in Toronto, Canada. He is currently studying for a PhD in Health Services Research (HSR) at the Institute of Health Policy, Management and Evaluation (IHPME) at the University of Toronto, focusing on health service research and cancer epidemiology. He previously worked as a Lecturer in the Department of Community Medicine, Manipal College of Medial Sciences, Kathmandu University, Pokahra, in Nepal. He has worked extensively with health care systems in India and Bhutan and has a particular interest in cancer patterns in the Himalayan region.