Fish Story: What Is the Purpose of Big Pharma?

Shortly before the end of his triumphant reign as the most hated man in America, Martin Shkreli attempted to explain why his company had increased the price of the toxoplasmosis drug Daraprim® from $13.50 a tablet to $750. “I’m like Robin Hood,” he told one interviewer. “I’m taking Walmart’s money and doing research for diseases no one cares about.”

Well, no, not really. Shkreli, a man most commonly described as either a “sociopath” or a “psychopath” in news stories, created no new orphan drugs prior to his arrest for securities fraud. He did, however, plop down $2 million for a one-of-a-kind Wu-Tang Clan album. Even had his company done research “for diseases no one cares about,” that would hardly have made him Robin Hood. Nothing in this world is more lucrative than drugs made for orphan indications.

Shkreli, when all is said and done, was a little fish in the pharma sea. He was despised nearly as much by pharmaceutical company CEOs as by the general public. His basic claim—“We charge high prices to create the next generation of lifesaving drugs”—is one that companies have employed for years. The claim is tarnished when mouthed by a comic book villain.

Shkreli, unlike his expensive album purchase, is not one of a kind. You may have heard of a pharmaceutical company called Valeant. Valeant, until recently, was headed by Michael Pearson. Pearson’s Valeant, predatory at a level Shkreli could only have dreamed of, had a market capitalization of $90 billion last year.

Valeant’s business model was straightforward. First, buy cheap old drugs that are essentially without competition, jack up the price to levels that are obscene even by pharmaceutical company standards, then rake in bins full of money. Second, use so-called tax inversions to minimize the government’s take by pretending you are a European company. Finally, waste no money researching new drugs. Indeed, brag to investors about the pointlessness of wasting shareholder dollars on drug research. That old social contract linking high drug prices to therapeutic innovation? Forget about it.

The copper chelator trientine hydrochloride (Syprine®), a lifesaving drug for patients with Wilson’s disease, costs $1 a pill throughout much of the world; in the United States, the average list price for this 1950s drug is $300,000 per year. And this is only one of a large catalog of Valeant drugs, cast-offs retrieved from the remainder pile, cleaned up and sold at a markedly higher price than when they debuted.

Valeant has fallen from market grace, the victim of irregular bookkeeping and public infamy meted out by a weirdly bipartisan Congressional committee. It is being investigated by the SEC. But nothing has changed. Shkreli’s fall, and Pearson’s fall, had little or nothing to do with overcharging for a drug bought from someone else. This was, and remains, a perfectly legal—if morally suspect—business model.

Which brings us to our question of the day: why does Big Pharma exist? I know this doesn’t seem a serious question, but let me ask anyway. Consider the following drugs: sunitinib, rituximab, trastuzumab, ibrutinib, vemurafenib, regorafenib, pembrolizumab, nivolumab, and ipilimumab. The list could go on quite a bit further, but let’s stop there. What do these successful, FDA-approved drugs all have in common? All started their lives in a biotech or small pharma company. All are now safely ensconced in a Big Pharma company, like Jonah in the belly of the whale.

Indeed, Big Pharma’s ability to create—as opposed to taking credit for—exciting new drugs is negligible at best. If we had to rely on Big Pharma to create new drugs, our pharmacy shelves would be bare. Big Pharma’s return on investment for in-house research has steadily declined, a long-term trend with no end in sight. Many of its old, in-house standard-bearers have already gone or soon will go generic, leaving these old giants facing the dreaded patent expiration cliff.

One often hears from the pharmaceutical industry that the obscene cost of new drugs is driven primarily by the cost of developing those drugs, the risky nature of the process itself (failures are expensive and common), and the enormous financial burden imposed by the modern regulatory apparatus. All of these are true, and perhaps all of them are important.

But when I look at the M&A story, I wonder how much of the cost of a new drug (leaving aside the ridiculous mark-up specific to the U.S. health care system) is due to M&A costs. Consider ibrutinib, originally synthesized by Celera Genomics as a Bruton’s tyrosine kinase (BTK) inhibitor. Celera sold its BTK program as part of a package deal to Pharmacyclics in 2006 for $2 million in cash and up to 1 million shares of Pharmacyclics stock, then worth a pittance. The 2006 press release said that Celera might receive up to $144 million in milestone payments, plus a percentage of royalties if any of the drugs were commercialized.

Pharmacyclics, which I remember from that time as a company working on gadolinium texaphyrin, a radiosensitizer for brain metastases, developed ibrutinib for the appropriate B-cell diseases in which BTK played a role. Ibrutinib eventually received FDA approval for mantle cell lymphoma, chronic lymphocytic leukemia, and Waldenstrom macroglobulinemia.  The drug costs somewhere in the range of $116,600 to $155,400 per year wholesale.

Last year AbbVie, which is a big fish, acquired Pharmacyclics for $21 billion. It is projecting annual global sales of ibrutinib at $5 billion in 2020. The drug was not exactly what you would consider cheap before the purchase, so one can only wonder how much of that $21 billion will be priced into future drug costs. A good case can be made that ibrutinib will end up being far more than a B-cell malignancy drug (it does more than inhibit BTK), so maybe they will make it back on volume, but $21 billion is a lot of money for a promissory note. Pharmacyclics’ price-to-earnings ratio at the time of its sale was 280, according to Yahoo Finance, which seems crazy high. Will AbbVie recover the sunk costs of its purchase? I know they will try.

AbbVie has been on something of a buying binge of late. It recently purchased privately held Stemcentrx for what may ultimately be up to $9.8 billion. Stemcentrx did not have a drug on the market, though it had several in development.

If Big Pharma is lousy at creating intellectual capital, what is it actually good for that smaller biotechs cannot handle? Biotechs outsource much of early drug development (drug production, pharmacokinetic and pharmacodynamic analyses, animal toxicology), but so, increasingly, does Big Pharma. And Big Pharma likes to buy biotechs that have been “de-risked,” having successfully passed through early-phase trials, and as recent M&As suggest, de-risked to the point of already having a drug on the market or in late phase III trials.

Another possible justification for the big fish is that most small biotechs lack either the capital or the expertise to successfully bring a drug to market. Phase III trials are large, multiyear extravaganzas, and require special skill sets in study conduct, biostatistics, and regulatory affairs.

I sort of buy this. In the past, most phase III trials were conducted by publicly funded cooperative groups. Increasingly, these studies are performed by Big Pharma, or at least Big Pharma via a contract research organization (CRO), because these organizations are faster than our financially starved, government-burdened cooperative groups. Preparing a successful FDA packet, the final hurdle, is something Big Pharma does well, though I suspect that this could be contracted out easily enough. And of course Big Pharma is really good at marketing.

All this is expensive. So while small biotechs can hire CROs just like Big Pharma, Big Pharma has ready access to capital markets, established infrastructure, and oodles of regulatory experience. It probably can do this sort of thing better than the small fish. But this tool kit is quite different from scientific discovery.

One can be forgiven for thinking that the cost of developing new drugs, for all the big fish, is more and more the cost of buying something someone else created. The big fish exists to identify and pursue the small fish (sometimes very small—krill-like small) and to either bite off its head or swallow it whole. A premium exists for speed and for swallowing tasty small fish.

I do not mean to imply that the small fish find the prospect of being eaten by the big fish unpleasant. The metaphor falls apart here, for the Boards of Directors of small biotechs generally love the idea of being purchased at a large premium, returning profits to their investors. It is what they are supposed to be doing. Such purchases are often the endpoint of a series of relationships between big and little fish, preceded by research collaborations and supported by milestone payments that allow the little fish to survive long enough to make something of themselves. (As a conflict of interest statement, I sit on the Board of a biotech company [see full COI disclosure].)

Mistakes can be disastrously costly. A few years ago, Sanofi bought BiPar for over half a billion dollars—cheap by today’s standards—and spent a whole lot more bringing its PARP inhibitor through phase III trials, only to discover (embarrassingly so, as it was discovered by someone else) that the drug didn’t actually inhibit PARP. What was the total cost of this fiasco? Well over a billion dollars, one suspects, and all through an inability to perform due diligence on the drug’s mechanism of action. But even when you know how a drug works, phase II and III failures are shockingly common.

Sanofi has not given up on PARP inhibition, though it remains incapable of creating its own drug. It recently made a hostile takeover bid for Medivation, which makes the as yet unapproved PARP inhibitor talazoparib as well as money-making enzalutamide for prostate cancer. The bid, a measly $9.3 billion, was rejected by Medivation’s Board as being insultingly low. But it has put Medivation in play, leading to a $14 billion bid from Pfizer.

Should we be shocked by any of this? No. These are economically rational business enterprises that have realized what they are good at, and what they are miserable at. That is what businesses are supposed to do in a capitalist society. They are good at being big fish. They are less good at scientific creativity. The real issue is that we—the collective “we” that includes government, insurers, and the public which elects the United States Congress—are their financial facilitators.

Or perhaps we too are a type of fish, a member of that family of thick-lipped North American food fishes whose scientific name is Catostomidae, though they are better known by their colloquial name: “suckers.” 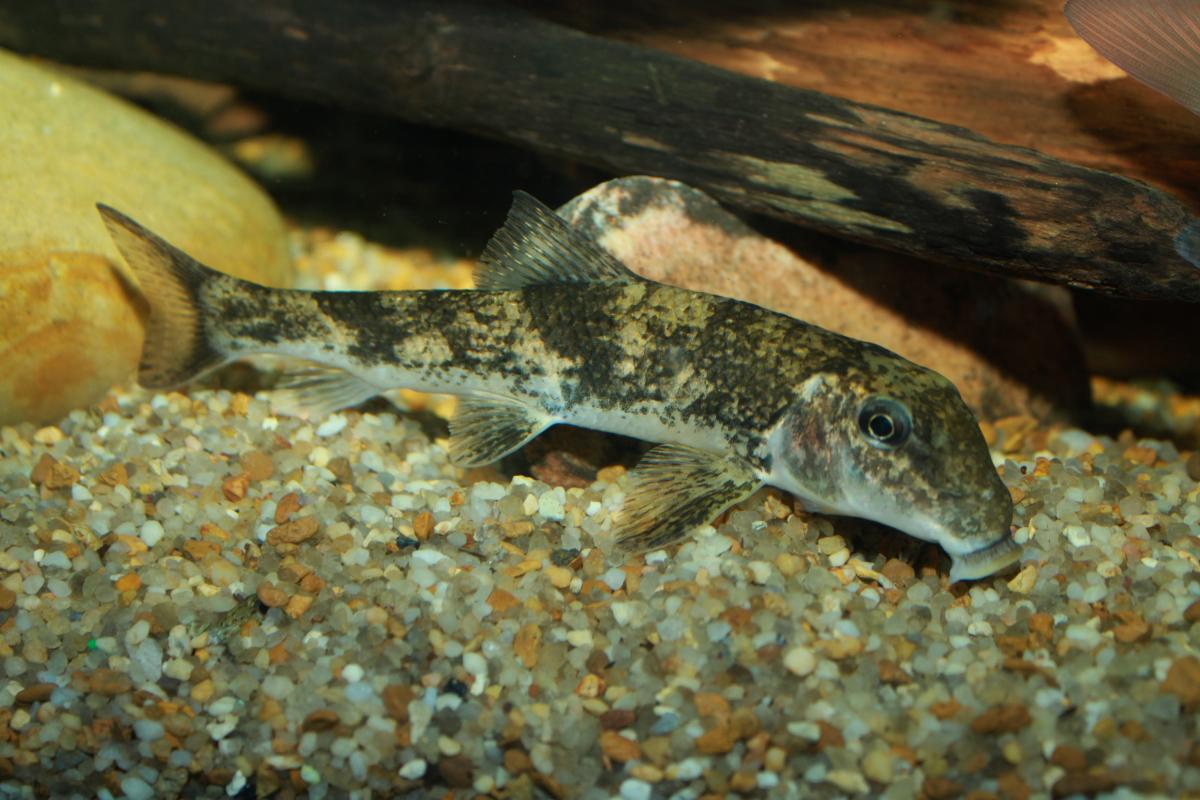 By Brian Gratwicke [CC BY 2.0 (http://creativecommons.org/licenses/by/2.0)], via Wikimedia Commons