Dispatch From Byblos, Lebanon: Birthplace of the Alphabet Joins in for Women’s Health

In October, for Breast Cancer Awareness Month, the Lebanese Breast Cancer Foundation (LBCF) and the Breast Center of Excellence of the NK Basile Cancer Institute of the American University of Beirut Medical Center (AUBMC) host public lectures and conferences and media interventions. In addition, we organize landmark events to attract women’s attention and advance knowledge about breast health, screening, and early detection of breast cancer, as well as promotion of modern high-quality care, supporting patients with breast cancer, and promoting research. We work throughout the year and with the Lebanese Ministry of Public Health during its October breast health campaigns.

In 2012, LBCF and AUBMC worked with the Municipality of Beirut and lit a famous natural wonder, the Raouché Twin Pigeon Rocks, in pink. At that time, journalists asked me about the reason we choose the Raouché Rocks. My answer was that those two rocks stood the test of time, faced many natural storms and high waves, but came out of them all strong and beautiful. That is the message I want to convey to women who have breast cancer. Patients go through treatment difficulties and can come out of them stronger with the support of their doctors, nurses, family, and society!

In 2014, we lit in pink another Lebanese Icon, the famous Castle of Saida (Saidon), a Mediterranean city in South Lebanon. The event was well received by the public and more women enrolled in breast cancer screening and early detection programs at local medical centers.

This year, we chose the famous Sea Castle of the City of Jbeil (Byblos). Byblos is one of the oldest populated cities of mankind and was listed under UNESCO’s historical world treasures in 1984. It is described as a village for fishers in 7,000 B.C. and a full city with streets and places in 4,000 B.C. It has many touristic landmarks including plenty of old souks, museums, churches, mosques, protection rings, and Mediterranean Sea castles from the times of the Persians, Greeks, Romans, Ottomans, Crusaders, and Arabs. The Phoenicians invented the alphabet in Byblos and spread it worldwide. It was the center for manufacturing ships from the wood of the famously strong Lebanese cedar trees, as well as pottery. 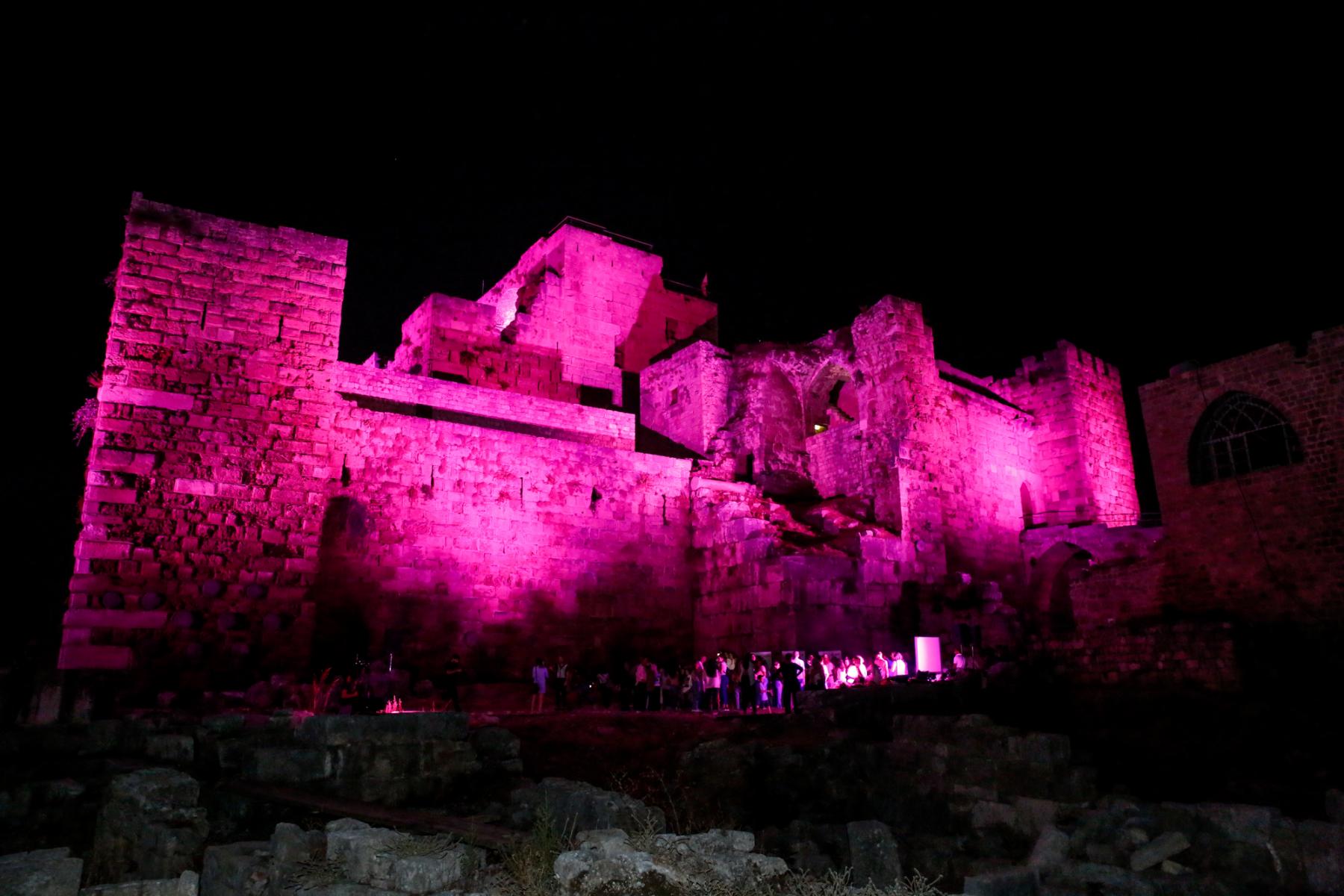 It was a great public event. The Byblos Municipality, Ministry of Culture – Directorship of Lebanese Heritage, National Commission for Lebanese Women (NCLW), and a large crowd was present with us on Saturday October 12, 2019 at sunset. AUBMC physicians, nurses, and staff, motivated for community service, as well as volunteers and breast cancer survivors of the LBCF, were there and felt very much rewarded as breast health messages were conveyed to the public via the press, TV, and social media.

Lebanese community leaders at the castle. Photo by Chafic Ariss.

We recommend breast self-exam and clinical breast exams by general physicians and gynecologists, and screening mammography starting age 40. We have shown that the rate of advanced breast cancer in Lebanon has decreased and early stages now constitute around 65% of cases. Rates of total mastectomies have increased and more sentinel lymph node biopsies are being done.

We also emphasize the fact that we do not forget women who have breast cancer at advanced stages. We promote education, research, access to care, modern treatment, and attention to better quality of life. We also add fundraising goals and support patients in financial need. 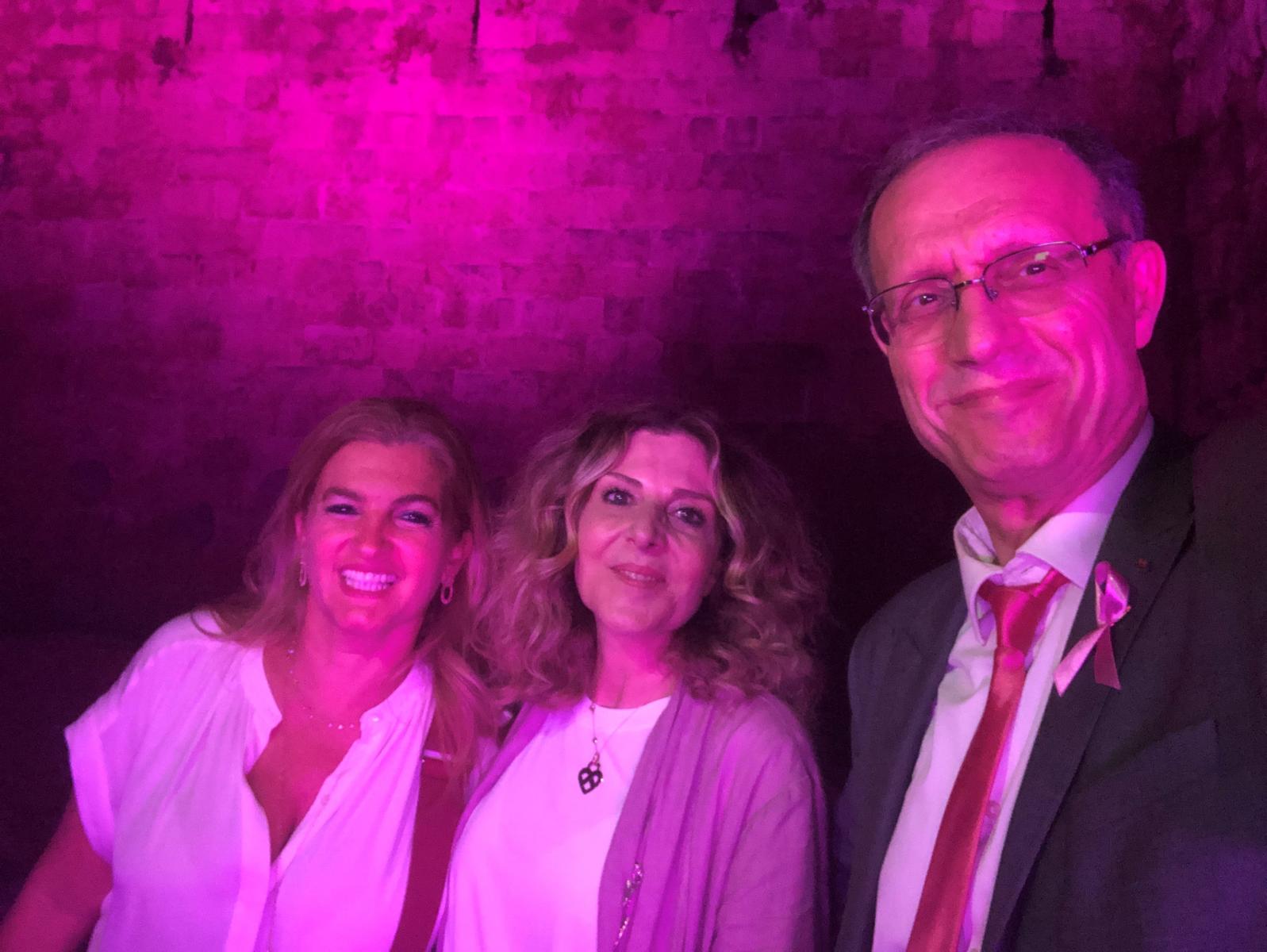 Subscribe to this column
Apr 13, 2022
The Beauty of the White Coat Ceremony in Medical School
Mar 08, 2022
10th Anniversary of the Beirut Breast Cancer Conference (BBCC-10): Perseverance and Multidisciplinary Conferencing
Dec 15, 2021
On Professional Recognitions and Awards
Oct 15, 2021
Rewarding Awareness Campaigns Amidst Major Crisis in the Middle East
See all Posts