While it would be ideal if all of our decisions in medicine were based on clear and definitive data, that isn’t the case, for most of what we face with our patients. Data is open to interpretation, studies can always be criticized, and the results are not always clear. Still, as clinicians we must help our patients make informed choices; “I just don’t know what you should do,” doesn’t breed confidence in anyone.

I welcome any opportunity to embrace breakthroughs: the role of trastuzumab in women with HER2-positive breast cancer, the use of olaparib after first-line chemotherapy in women with BRCA mutation-associated ovarian cancer. I have also become comfortable in uncertainty, in part because of the way I’ve practiced—in a multidisciplinary forum. Gynecologic oncology has always lent itself to multidisciplinary care. Surgeons train in medical therapy for women with gynecologic cancers, radiation oncologists also are familiar with the drugs we prescribe, and medical oncologists learn the language of surgical care: cytoreduction, optimal debulking, R0 resections. It’s a common language, and we can speak to each other with the same terms. I enjoy our discussions because it provides an opportunity to look at emerging data together and make decisions on how it might impact the care we provide to our patients. We strive for consensus, to speak on the proverbial same page—but that can sometimes be a very difficult process.

I recall one such conference where we discussed a patient new to our practice. She had presented with abdominal bloating and pain, CA125 markedly elevated. Exam revealed a pelvic mass, confirmed on CT scans, which also showed fluid in her abdomen and around her lungs, as well as multiple tumor masses consistent with carcinomatosis.

At the time she came to our tumor board, the first reports of neoadjuvant (or primary) chemotherapy in ovarian cancer were being released. The data showed using chemotherapy prior to surgery could reduce the risks of intra- or postoperative complications and increase the rate of a complete cytoreduction. While studies did not show that doing so improved survival (compared to primary surgery), neoadjuvant treatment did not increase the risk of death from ovarian cancer.

We had talked about the study and its conclusions. One of my colleagues was skeptical. The survival reported on the trials was far worse than had been reported on upfront surgical trials (where the question was, “What is the best postoperative treatment?”). He also couldn’t make sense of why the increased rate of a successful surgical outcome (or an optimal cytoreduction) did not translate to an improvement in survival. We talked further. I cautioned about cross-trial comparisons, noting that patients in these trials had a larger burden of cancer than those enrolled in the prior trials, and hence, we could not really comment on differences seen in survival.

“Well, I know I can get her tumor optimally resected, and I know I can get a better result than with your chemotherapy,” I recall he said. “Anyway, this doesn’t matter. At this institution, all of my patients will have surgery first. So, you can see her following surgery.”

A bit taken aback, I had a choice. I could stay quiet, or I could speak up. I decided to speak up. “First off, and with all respect, she is not your patient. She is here with cancer, she wants a plan, but you do not have any ‘claim’ to her or her cancer. But, let’s get back to her cancer. It’s extensive, and I doubt you can get an optimal resection without removing parts of her colon. Based on the scans, she’d have to have a lot of disease removed in the upper abdomen, maybe even the diaphragm. If chemotherapy could help make that surgery less extensive, even spare her a colostomy, you’d still rather put someone through surgery first?”

“The data are clear: surgery for ovarian cancer is critical, and aggressively going after disease is associated with an improvement in overall survival. So, yes, even if takes removing her colon, I recommend surgery.”

I thought about what to say next. On the one hand, he was absolutely correct: one cannot even hope to cure ovarian cancer without surgery, and women who have the best outcomes are those in whom all disease has been resected (an R0 resection). On the other hand, we were talking about a woman dealing with a new disease, who might face the prospect of a colostomy—something that would severely challenge her recovery and her own sense of normalcy, even if it was temporary. To me, there was an alternative, a reasonable one, that would give her the chance to avoid the complication.

“Obviously, I defer to your opinion from a surgical standpoint; if you think you can optimally resect her cancer, then I’m not going to challenge you. But, at the end of the day, you will walk out of that successful surgery and go back to your normal life. She, on the other hand, will wake up with a colostomy and life will no longer be normal. I cannot let you proceed without her knowing there is an alternative.” We went back and forth for a bit, each trying to push a point of view, perhaps trying to change each other’s mind—and that was obviously not going to happen.

At some point, our colleague from radiation oncology stepped in. “Obviously you both believe in what you are saying. But we need to find a consensus here, and quite frankly, you are both more in agreement than not. You are both saying you recommend surgery, and you recommend surgery to no residual disease. You are stuck on the issue of timing. We have always agreed that any patients seen here must be told of her options, so, she must be told about them. I do believe, as with most women facing a new ovarian cancer diagnosis, she will be better served if we can come to consensus.”

With that, our surgeon offered up this tumor board opinion: “The patient has clinical stage IIIC ovarian cancer, and is a candidate for surgery. In order for an optimal surgical result, the bowel will need to be resected and in all likelihood she will require a colostomy. There is a reasonable alternative, should she want to decrease the risk of a colostomy, and that is to treat her with three cycles of chemotherapy followed by an interval cytoreduction surgery. Both options should be discussed with the patient in a combined multidisciplinary visit.” I agreed as written, and we moved on.

This discussion at that tumor board provided the clearest example of why multidisciplinary and coordinated cancer care matters. I imagine if she had seen my surgical colleague as her only consultation, she would’ve proceeded to surgery and I would’ve seen her only afterwards, wondering why she wasn’t offered an alternative, and frustrated that I had no opportunity to do it myself.

Delivering care in a multidisciplinary way goes beyond the treatment of our patients as a team. It is the only opportunity to ensure a plan is created before any treatment is administered, and it is important that all of us who have the privilege of caring for patients with cancer give their input: from the radiologist looking at her imaging, to the pathologist taking us through the histology, to all treatment-directed clinicians, and those who support our patients. At the center is always the woman with ovarian cancer. Consensus may not be easy, but it is, ultimately, the goal. That, in and of itself, is the definition of quality.

This column is dedicated with much appreciation to my colleagues in Tblisi, Georgia. Thank you for hosting me and my colleagues for the ASCO International Multidisciplinary Cancer Management Course. To the faculty at Acad. F. Todua Medical Center, and especially Natia Jokhadze, MD, it was an honor to meet all of you, and I hope to meet again in the very near future. 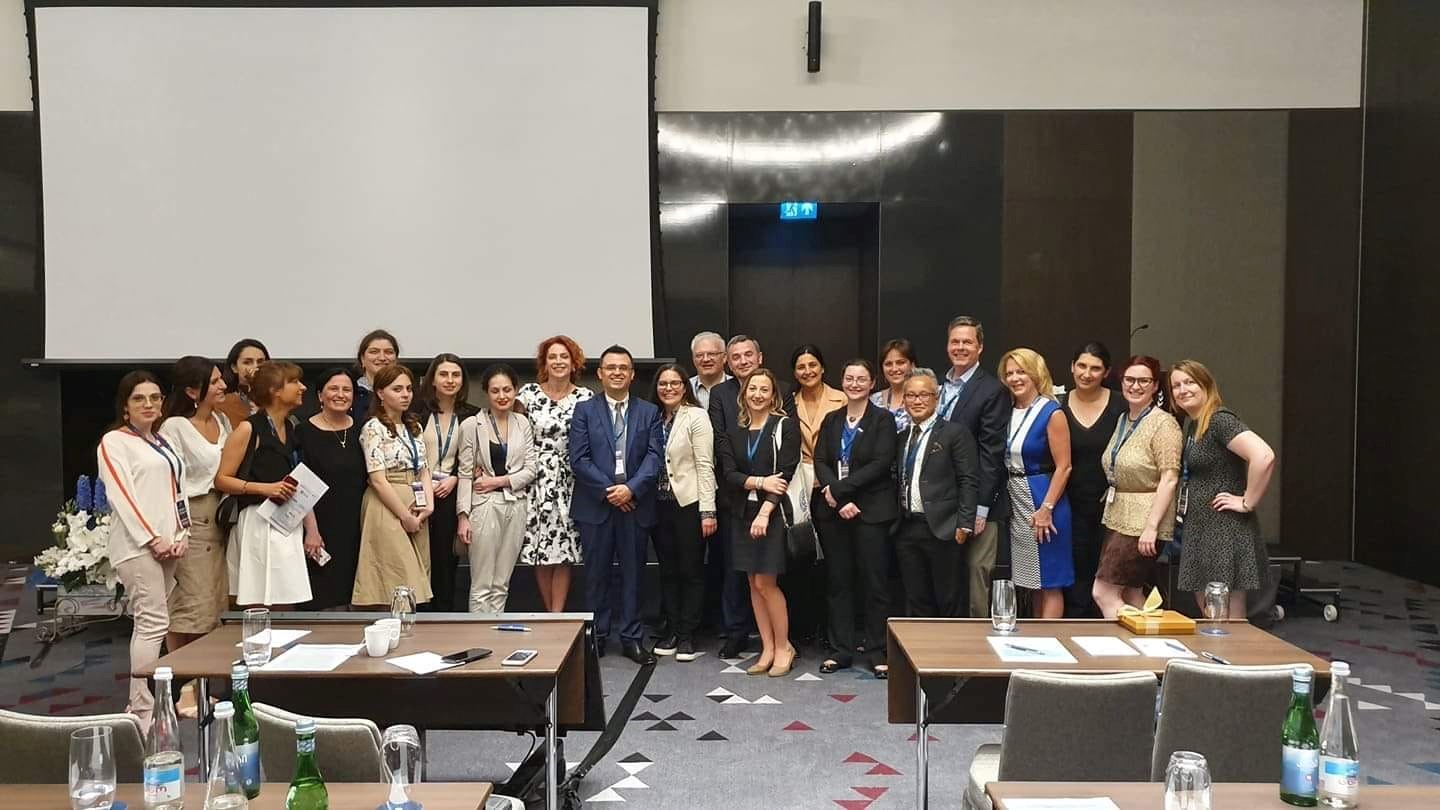 With faculty, staff, and attendees at the ASCO Multidisciplinary Cancer Management Conference in Tblisi, Republic of Georgia.