The Tale of the Third Leg 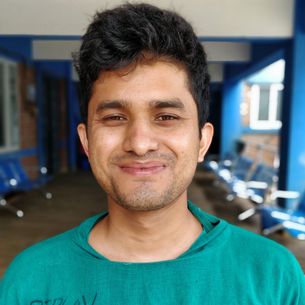 A person may have a disease, but he could very well spend his whole life without knowing he was ill. He may never know what he never had. Perhaps that is what makes a patient a ‘patient’—the gloomy realization of missing something vital.

I too, was never born a patient. Such were the conditions of my birth: remote, rural, mountainous, and far away from healthcare. Born under the moonlight in my ancestral home, on the seventh day after my birth, during a bathing ceremony, was it found that my left foot was not touching the ground. Then began a frantic parents’ journey to distant lands. “Proximal Femoral Focal Deficiency (PFFD),” doctors finally said in Vellore, India—1500 miles from home.

A combination of four Latin words could not give my parents their son’s deficient femur back. Advanced surgery was yet to visit the east. So, my parents traveled back, with heavy hearts and sore backs from carrying me. The proper reach of transportation remains an issue in many villages across Nepal.

I grew, moving on all fours or hopping on the right leg, nourished by the love of everyone around me. I received extra affection. Extra care. I was sprightly, and I was fast when I moved about. My enthusiastic parents encouraged me on. And I, never having known what it was like to walk or run on two legs, never knew what I was missing.

On a fateful spring, it all changed. A group of traveling prosthetist-orthotists visited our village. They told my father they could help. “Bring him to Banepa,” they said. In an epic journey down hills, across rivers, and finally through the clouds on a plane, we reached the beautiful hospital sitting atop a hill. To my child-eyes, there in the heart of the furnace, with elvish skill and dwarfish bruteness, they conjured me a third leg. An ortho-prosthesis was born out of sheet metal and rivets. They even fashioned a foot from two pieces of wood covered with leather. It became an extension of me right away.

We would go on to have a love-hate relationship. It would be a reason for ecstatic elation, as well as harrowing despair. A source of inspiration and a fuel for self-hatred.

I was 6 years old when I first walked, but I quickly found that I preferred running. Running down the daffodil-strewn hillocks, the spring air rushing to kiss my rosy cheeks, I never felt happier. I did not even notice I had a coxalgic gait. I would often leap, too—

just to feel like a flying bird (I still find myself involuntarily spreading my arms, humming to a song, and walking fast during good mornings on the hospital floors). But my mother wanted me to be cautious, and not jump too much. I never knew why until I leaped one leap too many—rivets came off the ortho-prosthesis and the metal parts became undone as I fell to the ground.

There was no expertise in repairing the ortho-prosthesis in the village. My father had to take it somewhere far away. I still vividly remember the first time I broke it. The three days I had to wait for the ortho-prosthesis to come back to me were excruciating. The wait made me realize what I never had. What I was born without.

My closest chance at walking or running was a fragile contraption that could come apart any time I exerted. It filled my child-heart with a dread that I did not have before; I knew it would happen again. And it did. Over and over again. And thus, I was finally a ‘patient’—I realized I was missing something as vital as the ability to ambulate like a normal human being.

And so, it went on: the cycle of damage, repair, and creation. I flipped through elation and despair, like the sides of a coin, tossed not by me but by my inopportune fate. Sophisticated titanium adapters replaced crude metal rivets. Uniaxial and SACH feet replaced handmade leather and wooden feet. They allowed me more mobility, and I exploited them fully. I broke and sheared off parts the prosthetist had never seen being done before. Accidents like the first one became few and far apart. The lengthened gap gave me the time to make peace with my shortcomings. But it was always the same pit of despair when it broke apart abruptly.

It’s been a long journey; from watching a doctor walk into my room, to walking into patients’ rooms as their doctor. These days I can fully invest myself in the care of my patients and their needs as I do not have to worry about my ortho-prosthesis giving in abruptly. But, sometimes, there is a shadow of fear that limps behind me—but it’s not as bad as the one I had growing up. These are minor issues like a Velcro that needs to be replaced or a screw that needs to be tightened. But major mishaps that can render me unwalkable still can happen, however rare.

It has been an incredibly humbling journey. For there are things that may never have happened had I not had PFFD. I would have never gone to a boarding school far from home to receive the best education. Without being surrounded by friends who inspired and supported me to engage in sports, travel, fantasy, and studies, I would probably never have developed the mettle to pursue my heart’s desires, and perhaps not even have become a physician.

There are also some wonderfully unique things that I, as a physician with an obvious disability, can bring to patient care. While it might not extensively influence the depth of empathy I feel for my patients (I would feel for their sickness, disabled or not), I certainly feel that it helps me develop stronger bonds with my patients. I feel many patients are more likely to entrust me to carry the burden of their disease, seeing that I have been carrying mine for years. And I would take good care of it. Many times, I have been able to pacify frustrated patients when others could not; I am certain that the way I walked towards them had some part to play.

And the most important thing I learned is to recognize the despair in the eyes of patients with chronic diseases during their acute exacerbations or relapses. One may take perfect care of their health—take their medications religiously as prescribed and treat their body like a temple—but exacerbations are inevitable. It hurts more when you have been doing everything your doctor has told you to do. It hurts more when you are of a viable-dieable age and have fully assumed the responsibility of your health.

The realization that they are sick with a disease that will keep haunting them pulls them down towards a gloomy abyss. Becoming a ‘patient’ requires a lot of peace to be made. It reminds me of the times my ortho-prosthesis broke down when I was just standing up, or when I took my first step in the morning. My heart aches for them. It wants to empathize with them, but I know I cannot tell them everything will be fine. That would be both untrue and patronizing. But I do often ask if they want to talk about it.

Perhaps this is why I want to pursue a career in hematology/oncology. These are the patients who have diseases that ensnare them at a young age. These are the patients who live with the shadow of fear that creeps behind them—a shadow that could quickly turn into a fire that can set ablaze every single incentive to pursue a happy life. And perhaps that is where I shall find my peace too, detaching them from their haunting shadows through medicine, innovation, improvisation, and stories.

Dr. Adhikari is a PGY1 resident in the Department of Internal Medicine in MedStar Union Memorial Hospital, Baltimore, Maryland. Follow him on Twitter @biplovadhikari. Disclosure.