Changing the Field in a War-Torn Nation 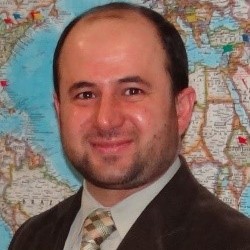 War, by itself, is something strange from the normal life, and if this were to be combined with a challenging disease like cancer, the impact on the affected person, the related family, and the whole society would be very severe.

Thirty-five years ago, during my early elementary school days in Iraq (the early years of the Iraqi-Persian war, 1980-1988), I faced my brother suffering from a disease that left him at home and away from his middle school. I did not understand what was going on and why my brother was not attending his school. Why is he limping? Why was he in pain sometimes?

A few months later, I lost my brother and my parents informed me that he died. Years later, I understood that he was affected by cancer, and “that disease”—as named by many of the people there—is usually fatal, and many of the treatment approaches are transient.

About two decades after my brother’s death and after I had finished medical school, I decided to take on the challenge of changing this field in that war-torn nation. I entered the local oncology department as a trainee, in spite of there being no categorized program, and stayed there for over three years. (With the embargo and sanctions applied on Iraq from 1990 onward, many professionals left Iraq, including the highly qualified radiation oncologists in Baghdad, and it was practically impossible to establish a board training program in this field. The available mentors were not board-certified.)

After seven years of traveling, I returned to Iraq to lead the establishment of the first board training program in radiation oncology at the Zhianawa Cancer Center to train new youths locally, who four years later graduated as the first board-certified radiation oncologists in Iraq in 2017. The mission was to serve patients, the public, and the medical profession by certifying that its diplomates have acquired, demonstrated, and maintained a requisite standard of knowledge, skills, understanding, and performance essential to the safe and competent practice of radiation oncology. Our vision was to advance safety and quality in health care by setting the definitive professional standards for radiation oncology through this program by the year 2020.

The program began outreach to colleagues in radiation oncology, medical physics, and other related disciplines globally to invite them to serve as examiners and trainers for short visits and cover some of the local gaps. Fortunately, most of the outreach was successful and the program drew colleagues from many different countries (Jordan, United Kingdom, United States, Canada, and Italy) and disciplines (medical physics, radiation oncology, brachytherapy, clinical oncology, surgical oncology, and gynecologic oncology).

As an attempt to standardize our level with the international programs in developed countries, we connected with the American College of Radiology (ACR) in order to allow our residents to enroll in the annual ACR in-training examination in March 2017 (on the same day with their peers in the United States of America). Seven residents joined hundreds of examinees from the United States, and one of them was above his peers' mean global score (68.7% versus mean of 65.5%).

I am proud to say that so far, nine colleagues from that initiative became new radiation oncologists in Iraq, and that the training program is running smoothly.

On World Cancer Day, I am and I accomplished.

Dr. Mula-Hussain is a member of ASCO’s International Affairs Committee and a physician in radiation oncology at the Cross Cancer Institute, Edmonton, Canada. He is the former program director in radiation oncology at Zhianawa Cancer Center and former founding chair of the Scientific Council of Radiation Oncology at the Kurdistan Board of Medical Specialties, Kurdistan, Iraq. Follow him on Twitter @MulaHussain, LinkedIn, and Facebook.