This week in which the country will come together to mourn the passing of a true American original, John McCain, it might be worth considering our (your) own mortality. Even as the ongoing progress toward controlling prostate cancer is underway, it remains clear that “something else” will get us. As an example, in a study I was privileged to lead among patients with high-risk prostate cancer, other cancers (many of which were caused by our adjuvant mitoxantrone treatment) were as likely to lead to death and prostate cancer was the cause of dying only about 20% of the time. 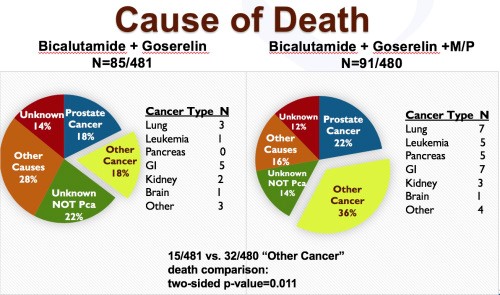 As oncologists, we face the “end of life” issues more frequently than most physicians, and certainly deal with the reality of death more than folks in most other professions. I distinctly remember one lovely woman in her 50s who was very open in discussing her wishes. She wanted to die while lying on her favorite beach in Florida watching the sunlight sparkling on the ocean—not an easy thing to arrange (and it didn’t happen). My own fantasy would be to have a lovely vacation in Hawaii (without this week’s rain) with my entire family, say my goodbyes as I put them all on the plane, and stay over an extra day to pay for the hotel and be sure all of my financial affairs were up to date—then die of a heart attack on the way home the next day. Perfect. The airline would be carrying my carcass home for the mere cost of a coach seat and I wouldn’t even have to suffer that long in the crunched position with no leg room.

Short of these fantasies, however, I recently undertook an exercise that anyone could do and I herewith commend to you as well. My wife and I were lucky enough to score tickets to the London production of Hamilton last February. In it, there were two numbers that grabbed me by the heart. First was Washington’s “teach ’em how to say goodbye” song, “One Last Time.” As with John McCain’s final commentaries over the past few months, Hamilton’s farewell speech written for Washington was masterful (as is Lin-Manuel Miranda’s reprise).

But the song that most moved me to tears (and action) was “Who Lives, Who Dies, Who Tells Your Story.” After listening to it about a dozen times, I realized that we all have a story. It may not be as honest/noble as John McCain’s, or as consequential as Hamilton’s or Washington’s, but for some small group of your relatives or children or grandchildren, your story will have special meaning. If you don’t write it, your memories of your father, your grandfather, your family in general will die with you. In my case, I read a couple of autobiographies, self-published, from friends/acquaintances and decided that their stories were highly personal, and not terribly interesting. But when I started writing the story of my own grandfather and father, and my story, it was a joyful experience of reliving many happy memories, and a way of reconnecting with my first love affair, our children’s births, and the many blessings that have come my way. The result is not a literary masterpiece, but I am going to have it bound and give a copy to each of my kids to gather dust on their bookshelves.

In the arc of history, some things have not changed. “Our days may come to seventy years, or eighty, if our strength endures; yet the best of them are but trouble and sorrow, for they quickly pass, and we fly away” (Psalm 90:10). Although trouble and sorrow are a part of life (and of dying), there can be real joy in pausing to appreciate all life has given you. Carpe diem!