My Life With the Bergerots: A Tale of Mentorship and Friendship

I received an email from Matt Loscalzo, LCSW, on March 7, 2012, at 8:01 PM. Matt is a leader in City of Hope’s Department of Supportive Care, and the husband of my fellowship mentor, Dr. Joanne Mortimer. Joanne is a breast oncologist who had fought hard to get me a faculty position at City of Hope just 3 years earlier.

Matt’s request was simple. He was working on several projects remotely with Cristiane Bergerot, PhD, a talented psycho-oncologist in Brasilia, Brazil. Cris’s husband, Paulo Bergerot, MD, was finishing his internal medicine training. Matt was hoping that Paulo could come shadow me for a month and experience oncology practice and clinical research in the United States. 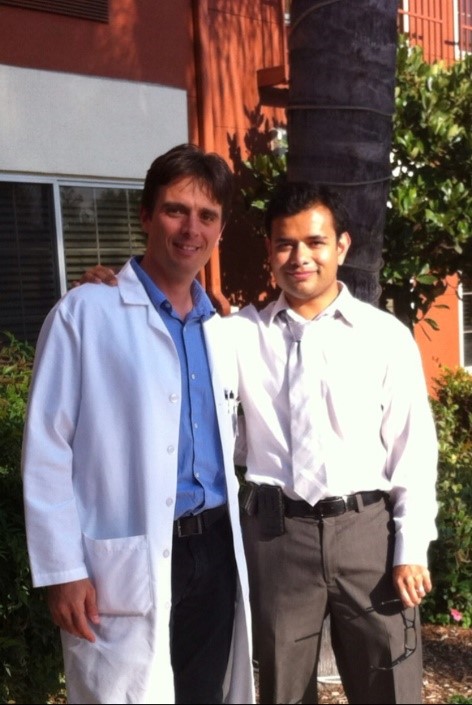 Monty and Paulo during the Bergerots’ first rotation at City of Hope in 2012.

I responded to Matt within 2 minutes in the affirmative. In my third year on faculty, I was curious as to why anyone would want to dedicate a month to my clinic. I hadn’t developed a comprehensive research portfolio, and my clinics were still relatively light. Nonetheless, I saw Paulo’s visit as an opportunity to expand my international outreach—a rare opportunity for a junior faculty member.

When Paulo and Cris came for their first trip in 2012, they stayed at an extended-stay hotel about 2 miles away from the City of Hope campus. Over many dinners together during that month, we got to know each other quite well. Cris explained to me her vision for bringing the field of psycho-oncology to Brazil. Paulo was excited to be starting a fellowship in medical oncology but dreamed of having the research opportunities afforded by institutions in the United States. After our month together, I was not sure when we would cross paths again. We made a pact to stay in touch, but my “program” lacked any formal structure or objective.

We ended up doing more than staying in touch. For 4 years thereafter, Paulo and Cris carved time out of their training to do an annual month-long rotation in my clinic. Unbeknownst to me, Paulo would moonlight nights and weekends to generate sufficient funds for the visit. I was ecstatic to host, but it bothered me that their substantial effort to come repeatedly to the U.S. had no tangible gains in terms of their careers.

In 2017, now armed with philanthropic funds from grateful patients, I sat down with a pad and paper and called Paulo and Cris. We came up with a year-long plan that would allow them to present, publish, and establish themselves as subject matter experts in their respective fields. The goal would be to transition them back to Brazil in academic positions—rare and highly competitive entities in the country.

It was a big risk. Paulo and Cris would have to pass on clinical oncology and psychology positions that had been offered to them. In addition, they would be leaving behind virtually all their friends and family. I equated it to the transition my parents made in coming from India to the U.S. decades ago—a bold step, but one that was essential to our family’s future.

Ultimately, Paulo and Cris took the plunge. They hit the ground running. Cris immediately forged a collaboration with William Dale, MD, the newly appointed chair of Supportive Medicine at City of Hope, and continued her ongoing projects with Matt. In my clinic, Cris drafted innovative studies exploring quality of life for patients with genitourinary cancer. Paulo was equally productive, writing a slew of review manuscripts in his first year and championing multiple translational studies. At the end of 12 months, they had presented at multiple ASCO meetings and racked up multiple Merit Awards from Conquer Cancer, the ASCO Foundation. It was at this point we decided 1 year was not enough—they were on a roll. We forged tentative plans to extend their program to a total of 3 years. 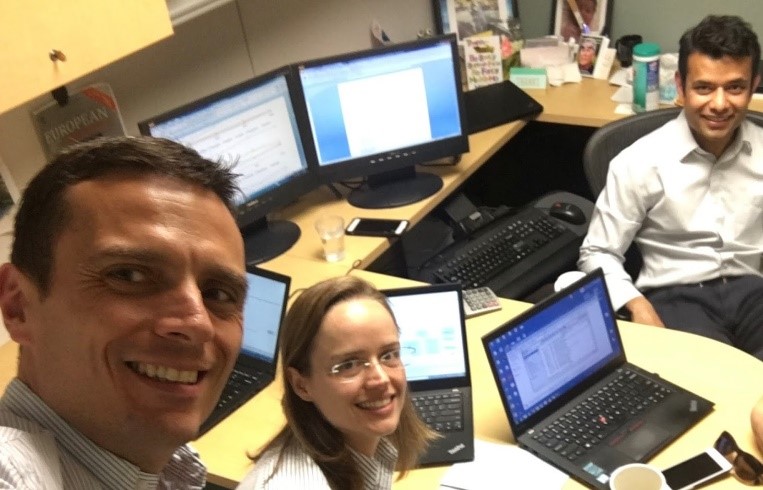 A mentoring meeting in Monty’s office with Paulo and Cris in 2017.

This year, 2020, marks the end of that 3-year stretch. Cris and Paulo each have 30 MEDLINE-cited manuscripts, the vast majority written during this fellowship. Cris has set a record for Conquer Cancer Merit Awards, earning a total of four within 2 years. Paulo was offered a spot in the ASCO/AACR Vail Workshop and developed a phase Ib trial in kidney cancer which is currently enrolling patients. Cris has been active within SWOG, participated in the prestigious SWOG Young Investigator Course, and will continue to develop psycho-oncology correlates for SWOG genitourinary cancer trials. Both have also established a unique presence on social media—those on Twitter will recognize @paulobergerot and @crisbergerot as Featured Voices at multiple ASCO meetings.

Their curriculum vitae will reflect all the accomplishments I have just mentioned, but what it will not show are the trials and tribulations they faced here in the U.S. Cris had a complicated pregnancy that left her bed-bound for nearly 6 months in 2018. These would be difficult circumstances anywhere, but being more than 6,000 miles away from home surely complicated matters. Cris, who is an authority on coping strategies, dealt with her circumstances by churning out more manuscripts than ever. Her collaborators (who found out about her medical issues in retrospect) could not believe the level of productivity she maintained. Our team also truly came together during this time—although there is no substitute for family, I am proud of the way my staff and fellows stood by Paulo and Cris. And there is a beautiful end to this part of their saga. Anne Bergerot was born on February 28, 2019. She is the youngest member of our team but has logged in just as many miles as we have over this past year, travelling to multiple meetings around the country. I recently had the privilege of serving as Anne’s godfather in a ceremony held on February 2, 2020. 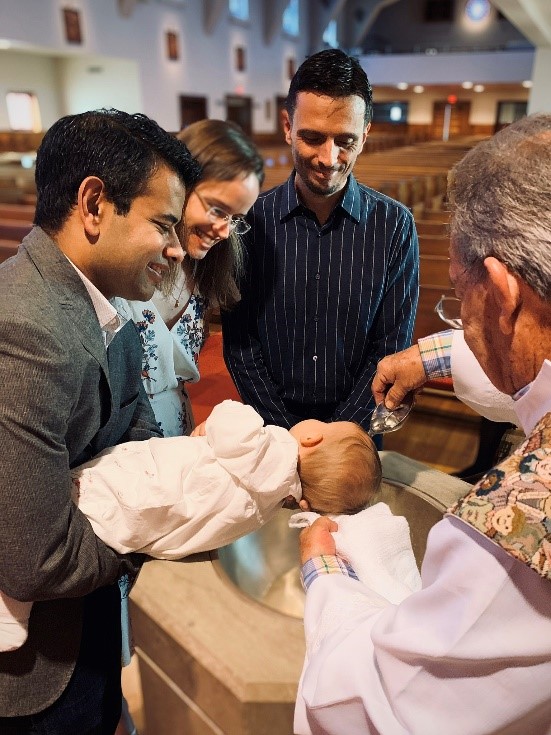 So at the end of our 8-year relationship, with 3 years of dedicated training in the United States, where do things stand? I am proud to say that Paulo and Cris have both accepted outstanding faculty positions at CETTRO in Brasilia, Brazil. Paulo will be leading the Genitourinary Cancer Program in the dedicated cancer hospital, while Cris will be the head of a newly founded Department of Psycho-Oncology. I always poke and prod my fellows for a career plan, but I certainly could not have anticipated an opportunity as golden as this. Of course, we will be continuing our collaboration, with both of them serving as Visiting Scholars at City of Hope. After witnessing firsthand the success Paulo and Cris have encountered through our international fellowship program, I will be continuing to invest in this effort as long as I have the resources to do so. 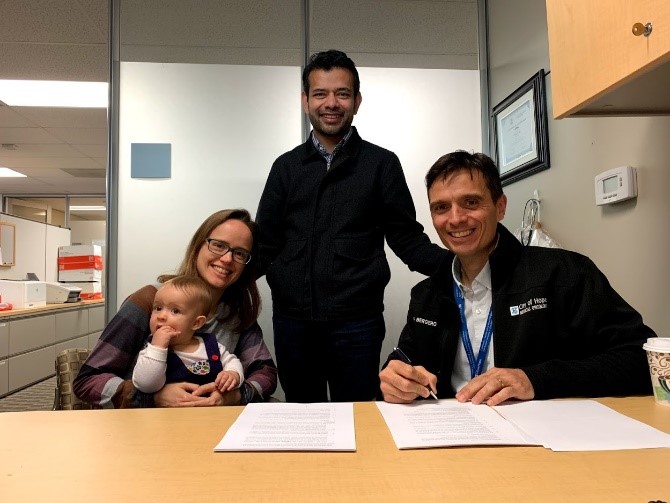 Paulo and Cris (with baby Anne) signing their contracts for CETTRO in Monty’s office (2020).

I am certainly not the only one to follow the model of taking on enthusiastic mentees from abroad. Toni Choueiri, MD, at the Dana-Farber Cancer Institute, was my inspiration for this model. Having seen the many outstanding careers he has helped forge, I was inspired to do the same.

As oncologists, we all gain satisfaction from improving the lives of our patients. As academic oncologists, we embrace teaching our institutional residents and fellows. I would push my colleagues to take this one step further and invest in trainees from abroad. You will have a transformative impact on their lives, and they will have a transformative impact on yours.

Dr. Sumanta K. (Monty) Pal is a medical oncologist at City of Hope, where he serves as an associate clinical professor in the Department of Medical Oncology & Therapeutics Research and co-director of the Kidney Cancer Program. Within ASCO, Dr. Pal is subcommittee chair of the Targeted Agent and Profiling Utilization Registry (TAPUR) Study Molecular Tumor Board, past chair of the Cancer Communications Committee, associate editor of the Genitourinary Cancer Advisory Panel, and a member of the Genitourinary Guideline Advisory Group. Follow him on Twitter @montypal.