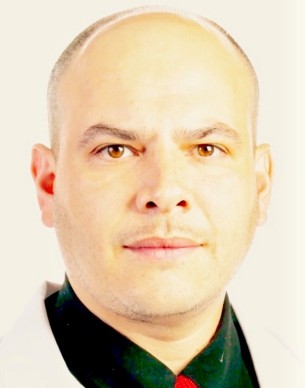 It will come as no surprise to those that know me, but I am a vocal advocate for social media. I can honestly say that it has helped me evolve as a physician by showing me different perspectives on topics in oncology, whether that be new treatments, research developments, or advocacy. It has also taught me to be conscientious about words, and the language of cancer. Beyond all of these benefits to who I am becoming as a physician, there has been an additional benefit: I have met remarkable people on social media, many that I have never met in person. Still, the connections are real, and one of those is my twiend (Twitter + friend), Gil Morgan.

Gil is originally from San Antonio, TX; however, a little less than a decade ago he decided he wanted to experience practicing medicine in another country, so he packed up his bags one Texas winter day, caught a flight to northern Sweden and started working. He claims the process was fun and that he has adjusted quite well into his “new” environment, although he does admit that it is “slightly” colder than San Antonio. Oncology ended up shaping his life and the further he went into the field, the deeper his passion grew—a familiar feeling among many of us working in cancer care. Suddenly, spending an extra 10 to 20 hours a week in the hospital became the norm. As a single doctor this was never a problem since there was no family to go to at home and he lived alone in a foreign land.

In the fall of 2016, Gil was getting ready to go back to the U.S. He had an interview at the NCI and was really looking forward to moving back to Washington. Upon his return to Sweden, a week after the NCI interview, he met the person who was to become his wife and in less than 2 and a half years, he became a husband and a father to a beautiful baby boy, Gilbert Morgan Jr.

One thing to mention is that Gil is also a very active social media physician and uses this outlet to promote cancer prevention and oncology education online (follow him on Twitter @weoncologists). This is where our paths first crossed and our friendship began.

I recall, back in March 2019, Gil and I were having a discussion on Twitter and he mentioned that he was expecting his first child, a son. It brought back many memories for me: the process of surrogacy, the anxiety of waiting, and the shock and joy that came with the birth of all of my kids. I also remembered how terrified I have become since, because life is so unexpected and I recognize just how little I control. In all that joy, I admit there was fear that something could happen that could challenge my dreams for my children. I might blame oncology for introducing the fear into my life, and that might be half true. But, in a society where guns can penetrate the sanctity of schools and where climate change is a real and present danger, I think I had good reasons to be afraid.

I wondered what the experience was like for Gil, so I asked him:

My son, Gilbert, is now 4 months old. I can honestly say that parenthood has been one of the biggest blessings and it has changed me as a person. Although we work in a field where so many of us always try to give our best, there is something about having your child home that changes you. As if you want to be the person they look up to; to lead by example. This does not mean that I strive for recognition, for awards, or to be celebrated. It’s more personal—I just want my child to know that I do my best every day and that what I do, I do to help my fellow man. I want him to know that money is not the important thing in life, it’s the passion you have for your profession.

Being a parent brought to better focus how oncology has changed my view of life. Thanks to my amazing patients, I have learned the only thing that matters is today. Yesterday has already passed and tomorrow doesn’t exist. All we have is the now, the today. It’s waking up and showing my family how much I love them, living with integrity and always starting work and ending work with a smile on my face, because I chose to do this. Although it can be hard psychologically and emotionally, I chose to do this, and at the end of the day we (as a profession) have accomplished a lot of good things. This allows me to come home knowing that I am and strive to be that good example for my child.

It amazed me to see hear his optimism, and I was kind of jealous of that. Where I had seen warning and danger, he had seen possibility and promise. Still, I recognized one commonality: we both wanted to be a role model for our kids, to teach them that material possessions are not as important as family, and to remember—as my mentor Dr. David Spriggs once told me—that at the end of the day, the job will not be waiting to hug you at home.

I did wonder how his work-life balance had changed since becoming a dad. In my case, my partner, Henry, and I had known we wanted kids since the day we met. He wanted to be there for them for the baseball and soccer games, the school conferences, and looked forward to the day when he could drive them to school or meet them at the bus. Above all, he wanted to be present for everything. In that way, he was literally the yin to my yang. I had always envisioned an academic career, looking forward to the days when I could provide for my family and be recognized as an expert in my chosen career. Ours was a work-life balance and a division of responsibilities that worked for us—not that it’s always easy, and perhaps the hardest thing for me to hear is my child saying, “I wish you were at my school today.” But, overall, we make a pretty good pair.

I asked Gil if parenthood had affected his view on work and life balance, and how:

Becoming a father teaches me every day that there is someone at home who needs me, and although it might seem that I am deeply needed at work, I am also deeply needed at home. My son has taught me that once work is done for the day, don’t go looking for more. Go home to your family and spend time together. I come from a medical family, so I already knew about the long hours and how it was not my father’s fault if he didn’t make it to my football games or how we wouldn’t see much of him until the weekend. I would be lying if I said that this was not one of the biggest contributing factors to my decision to stay in Sweden and not practice in the U.S. This doesn’t mean I didn’t think work-life balance would be possible in the U.S., but I knew that in Sweden, with a national emphasis on paternal leave and a strong focus on family, it would be easier. This locked me in.

One other thing that happened with parenthood: I became much more aware of the importance of education. I wanted very much to shape a future in oncology and spend much of my time working with students, residents, and fellows, all in an effort to spark the curiosity of research. Social media opened up an entirely new opportunity to teach, though. Now, I was commenting on studies knowing that my input was not limited to colleagues, but was available to everyone. I started conversations with women living with cancer, caregivers, advocates. Together we continue to review data on Twitter, converse on topics, and yes, even conduct research. For me, Twitter provided an opportunity to band together with like-minded individuals across the United States and form the Collaboration for Outcomes using Social Media in Oncology (COSMO). Gil had started a similar effort, called OncoAlert, and I was proud to sign up.

I asked if parenthood had informed his views on education, as it did with me.

I think that as physicians who are active in social media we change daily, because our colleagues, our patients, and the world around us changes at the same pace. I am really excited to see the potential social media plays in the exchange of information—it is the main reason I got involved.

Social media has allowed me to put more focus on cancer risk reduction, has given me the perfect venue to stream oncology lectures which colleagues from all over the world can attend—most importantly, our colleagues working in low-income countries.

OncoAlert is only one week older than my son! I even remember being at checkups with our midwife and contacting colleagues I know and asking them if they wanted to form part of the network. My hope is that OncoAlert will allow us to develop a stronger network of professionals aimed at keeping colleagues up to date. I really believe that social media has a bigger role on our profession. Ultimately, it could have major implications in the lives of many patients, we just have to figure out how to implement it.

Gil is one of those twiends I look forward to meeting in person one day. Until then, we will continue to engage on Twitter, and in addition to professional collaborations, I will look forward to seeing our families grow, together.