By Sarah W. Gordon, DO, and Sarah M. Temkin, MD

Advances in treatment have led to improved median overall survival for women in the United States with advanced stage ovarian cancer over the last several decades. Novel drugs including poly(ADP-ribose) polymerase (PARP) inhibitors have demonstrated efficacy in the treatment of this disease and this trend is expected to continue.1-5 Olaparib was the first PARP inhibitor approved for use in ovarian cancer and received a U.S. Food and Drug Administration label in 2014 for the treatment of women with deleterious germline BRCA mutations; rucaparib is also now available for treatment of women with germline or somatic BRCA or homologous recombination deficiencies. Olaparib and niraparib have additionally received approvals for use in the maintenance setting for recurrent, platinum-sensitive ovarian cancer based upon prospective clinical trial data demonstrating efficacy (Table 1).1,2,4,5 This class of drugs, originally conceived as a targeted therapy for a subset of women with this disease, is now broadly available for patients with or without measurable disease for treatment as well as maintenance following platinum-sensitive disease recurrence. Certainly, improvements in median progression-free survival (PFS) with maintenance PARP inhibition (ranging from 7 to 21 months) are impressive and the landscape of disease control in ovarian cancer has evolved significantly.1,2 But selecting the right drug for the right patient at the right time has become increasingly challenging. To decide which patient receives PARP inhibition, and at what point in her therapy, requires thoughtful consideration.

Overall survival (OS) remains the most objective endpoint in cancer clinical trials, as it is least subject to bias. Specific to ovarian cancer, proponents of using PFS as a clinical trial endpoint for drug approval cite the large trial size, prolonged timeline for final analysis, and potential for unintended loss of treatment effect from active post-progression therapies as reasons to use this surrogate endpoint. A post-hoc, subgroup analysis of patients with germline BRCA-mutated ovarian cancer treated with maintenance olaparib or placebo demonstrated a 2-month overall survival advantage, which was not statistically significant (29.8 months [95% CI 26.9-35.7] vs. 27.8 months [24.9-33.7]).5 No prospective trials of PARP inhibitors in ovarian cancer to date have reported a statistical or clinical overall survival improvement.

Because of the high recurrence rates associated with ovarian cancer, maintenance therapy has been an attractive concept in this disease. However, trials of maintenance therapy using taxanes and bevacizumab have fallen short of the goal of improving OS in this disease. The GOG 178 trial, which tested the efficacy of prolonged paclitaxel administration (12 additional cycles vs. 3 additional cycles), showed a clinically longer PFS in the arm treated with 12 cycles, but there was no impact on OS.6 GOG 212 confirmed a lack of OS benefit to maintenance paclitaxel.7 Maintenance hormone therapy with tamoxifen has not been shown to improve OS. Bevacizumab maintenance in the up-front or recurrent setting (GOG 218, ICON7, and OCEANS) has failed to improve OS.8-10 Irreversible toxicities of taxanes include neuropathy and, for bevacizumab, fistula and stroke.

In addition, traditional clinical trial endpoints, OS or PFS, often overlook the person-centered care perspective. Health-related quality of life (QOL) measures incorporated into maintenance PARP inhibitor trials did not demonstrate significant detriments in QOL compared to placebo, but the patient viewpoint may not be fully represented by these data. When asked directly, improvements in PFS or stable disease are insufficient reasons for patients with ovarian cancer to accept toxicity; improvements in OS are considered worthwhile. Women with ovarian cancer are willing to trade lengthened PFS for improvements in health-related QOL.11,12 Women with recurrent ovarian cancer will trade nearly 7 months of PFS to reduce nausea and vomiting during treatment and 5 months of PFS to reduce peripheral neuropathy from severe to mild.12 Common side effects of PARP inhibitors include nausea, vomiting, fatigue/asthenia, and cytopenias (neutropenia, anemia, and thrombocytopenia). In the ENGOT-OV16/NOVA study, toxicity led 14.7% of patients to discontinue therapy; this rate is likely to be higher in real-world settings.2 Prolonged use of PARP inhibitors, and their side effects, may limit a patient’s tolerance to third- or fourth-line therapy at the time of progression. More serious side effects, including myelodysplastic syndrome and acute myeloid leukemia, resulting in death are rare, but reported.

Financial toxicity, direct costs related to out-of-pocket expenses or indirect costs associated with time lost from work for the patient or caregivers, is a rarely measured outcome in clinical trials. At the recommended dose for maintenance therapy, these agents cost approximately $14,000 per month. In the United Kingdom, the incremental cost-effectiveness ratio of olaparib in patients with BRCA-mutated platinum-sensitive relapsed ovarian cancer following two or more lines of therapy has been estimated at higher than £92,214 per quality-adjusted life-year gained.13 In the United States, an incremental cost-effectiveness ratio of $258,864 per progression-free life-year-saved was estimated for 1 year of olaparib maintenance in patients with platinum-sensitive germline BRCA mutations, and was not found to be cost effective in patients with wild-type BRCA.14 In addition to these cost estimates, out-of-pocket expenses to patients for oral chemotherapy agents may lead to discontinuation of or delayed therapy.15 In patients experiencing side effects from PARP inhibitor therapy, the ability to stay fully employed may be impacted, leading to insecurity regarding health insurance and furthering financial distress.

More mature OS data are needed before treating all asymptomatic patients with recurrent platinum-sensitive ovarian cancer with maintenance PARP inhibitors. The population most likely to benefit from treatment while without evidence of disease compared to those with low-volume disease compared to those patients who will benefit from therapy to alleviate disease-related symptoms has not yet been defined. Until we know the survival benefit from PARP inhibitor therapy in the maintenance setting compared to treatment with therapeutic intent in order to alleviate disease-related symptoms, maintenance therapy for all incurs treatment-related toxicity without definitive benefit. 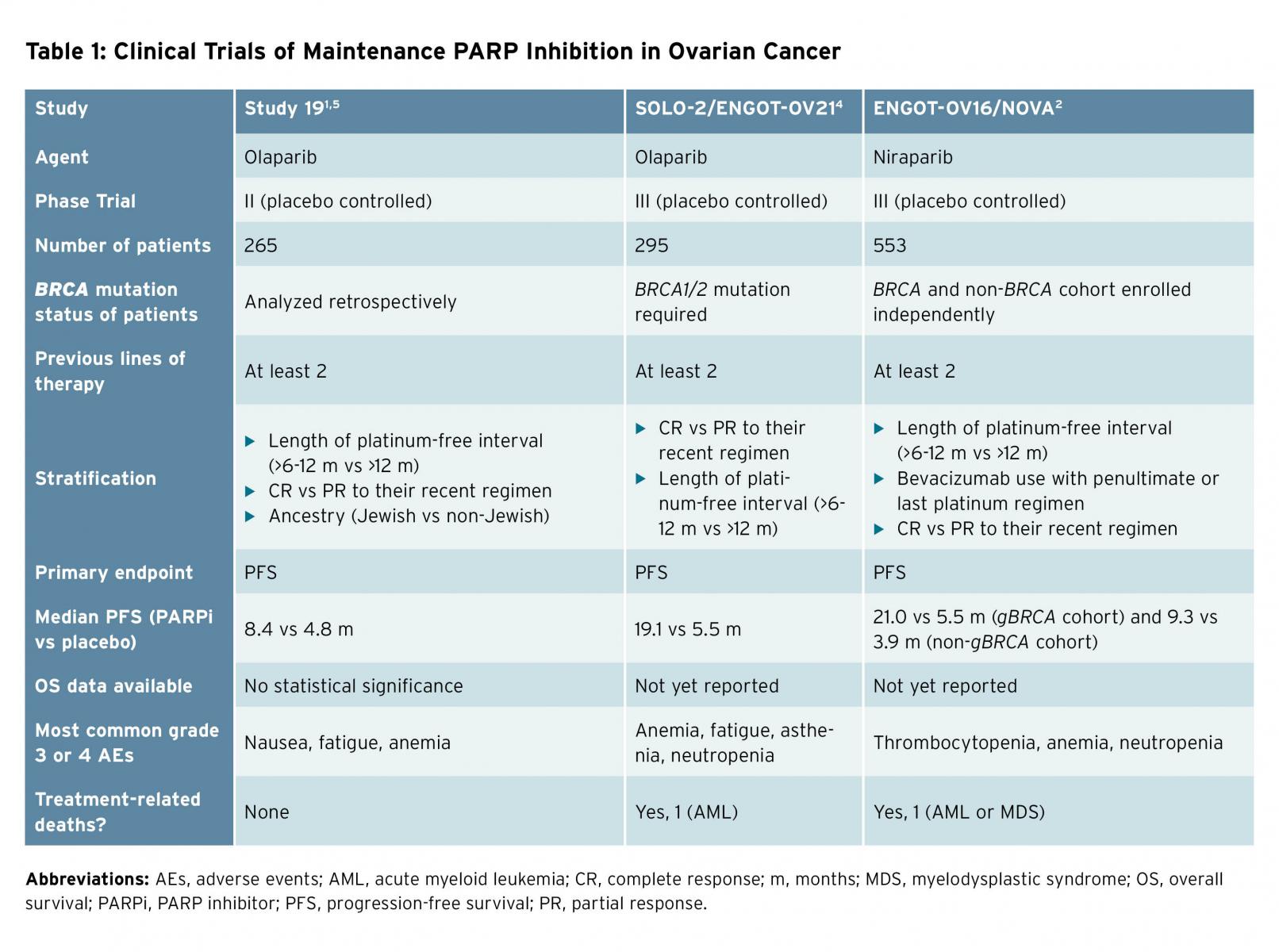 Current U.S. Food and Drug Administration (FDA)-approved options for maintenance for women with platinum-sensitive ovarian cancer include the anti-angiogenesis agent bevacizumab and two PARP inhibitors: olaparib and niraparib. A third PARP inhibitor, rucaparib, has also been studied as a maintenance drug in this setting and is currently before the FDA for consideration as a third option in this space. PARP inhibitors are oral and tolerable, and have a different side effect profile than bevacizumab, which is administered intravenously. Bevacizumab side effects include hypertension, venous thromboembolism, and bowel perforation. In the randomized controlled phase III trial OCEANS, which randomly assigned women with platinum-sensitive ovarian cancer (PS EOC) to gemcitabine, carboplatin with or without bevacizumab and bevacizumab maintenance, 20% of patients discontinued bevacizumab due to adverse events.1 GOG 213 is another randomized phase III trial which evaluated the addition of bevacizumab and bevacizumab maintenance to platinum-based chemotherapy. The reported bowel perforation rate was 2%, and 25% of women randomly assigned to the bevacizumab arm discontinued the study drug due to an adverse event.3

Currently, PARP inhibitors (rucaparib and olaparib) can only be used as a treatment in women with recurrent ovarian cancer with germline or somatic BRCA mutations.6,7 Therefore, only about 25% of women with epithelial ovarian cancer are eligible for treatment of recurrent disease with PARP inhibitors. In contrast, PARP inhibitors are effective for maintenance irrespective of BRCA mutation status in women with PS EOC who have experienced a partial or complete response to therapy. Multiple phase II and III trials have demonstrated an improvement in PFS for women with recurrent PS EOC randomly assigned to receive PARP inhibitors versus placebo. In the landmark study by Ledermann et al, there was a 65% reduction in the risk of progression or death for women with recurrent platinum-sensitive ovarian cancer who received maintenance olaparib. Only three out of 136 patients (2%) discontinued olaparib due to adverse events on this trial, and one of the three was from a small bowel obstruction. There was no difference in patient-reported outcomes between the patients treated with olaparib versus placebo.8

In SOLO-2, use of olaparib maintenance demonstrated a 13.6-month improvement in PFS (19.1 vs. 5.5 months) for patients with BRCA mutations as compared to placebo (HR 0.30 [95% CI 0.22-0.41], p < 0.001). Forty-three percent of patients randomly assigned to olaparib were still progression-free at 2 years, compared to 15% in the placebo arm.5 Therefore, more patients remain platinum eligible for future treatment. The most common grade 3 and 4 adverse event was anemia, which is easily managed. Patient-reported outcomes again showed no difference in the quality of life between patients randomly assigned to olaparib versus placebo. Only 11% of patients discontinued olaparib due to adverse events.

In the NOVA trial, niraparib improved PFS in women with recurrent PS EOC in complete or partial response after platinum-based chemotherapy, irrespective of BRCA mutation. While the largest improvement in PFS was seen in the patients with gBRCA mutations (21 vs. 5.5 months; HR 0.27 [95% CI 0.17-0.4]) receiving niraparib maintenance, patients without germline BRCA mutations also benefitted (9.3 vs. 3.9 months; HR 0.45 [95% CI 0.34-0.61]). Treatment discontinuation due to adverse events was uncommon (14.7%). Again, no difference in patient-reported outcomes was noted.4

Finally, rucaparib was evaluated as a maintenance therapy in a phase III placebo-controlled trial in women with PS EOC. PFS was improved by 5.4 months in the rucaparib arm compared to placebo (10.8 vs. 5.4 months, p < 0.0001). As expected, patients with BRCA mutations had the largest improvement in PFS (16.6 vs 5.4 months, p < 0.0001). Thirteen percent of patients discontinued rucaparib due to adverse events. No difference in patient-reported outcomes were noted between the two groups.2 The most common side effects of PARP inhibitors include myelosuppression, fatigue, and nausea, which are typically manageable. One of the concerns about PARP inhibitors is the risk of myelodysplastic syndrome (MDS) and acute myeloid leukemia (AML). However, the risk is low: 1% to 1.4% of patients treated with PARP compared with 0% to 1% in placebo group.

Given the dismal outcomes for patients with PS EOC following cessation of platinum-based therapy, even among those with complete or very deep partial response, use of maintenance therapy has become a standard of care in trying to prolong the treatment-free interval as long as possible, while also maintaining quality of life. PARP inhibitors have revolutionized this space with oral, well-tolerated, and highly effective therapies which prolong the treatment-free interval following platinum, often into a range that reclassifies the disease as platinum sensitive. No long-term sequelae in terms of response to future therapies, side effects, or quality of life have been identified.

PARP inhibitor maintenance represents a major improvement in the care of women with recurrent ovarian cancer.

Cancer of Unknown Primary Site: New Treatment Paradigms in the Era of Precision Medicine
Relapsed DLBCL: The Role for Lenalidomide Maintenance After ASCT
Hotspot Testing Versus Next-Generation Sequencing for NSCLC
Can Cancer Truths Be Told? Challenges for Medical Journalism
How Should We Intervene on the Financial Toxicity of Cancer Care?