This issue’s “Current Controversies in Oncology” is excerpted from the 2016 ASCO Educational Book, an NLM-indexed collection of articles written by ASCO Annual Meeting faculty and invited leaders from ASCO’s meetings. Published annually, each volume of the ASCO Educational Book highlights the most compelling research and developments across the multidisciplinary fields of oncology, including surgical, radiation, and medical oncology; symptom management; and pathology.

In this excerpt, the authors describe the development of soluble factors, such as serum proteins, as biomarkers in immunotherapy. To read the entire article, which describes other examples of biomarkers in the immunotherapy landscape, such as tumor-specific factors and host genomic factors, please visit asco.org/edbook.

Since ipilimumab entered the treatment landscape in 2011, immunotherapy has continued to revolutionize cancer therapy. In fact, immunotherapy was named ASCO’s top cancer advance of the year for 2016.1 A number of U.S. Food and Drug Administration (FDA)–approved agents are available for an increasing number of difficult-to-treat cancers, such as melanoma, renal cell carcinoma (RCC), and lung cancer, among others. In contrast with most chemotherapy and targeted therapies, immunotherapy offers the possibility of durable response, sometimes even without continued treatment.2-4 However, objective responses among patients treated with single-agent regimens are seen in less than one-half of patients treated. Combination immune checkpoint inhibitor therapy raises response rates but also increases toxicity and cost.5 Thus, to optimize selection of appropriate patients for immunotherapy and avoid unnecessary toxicity and health care costs, there is a clear need to identify truly predictive, and not simply prognostic, biomarkers of response.

Understanding which factors predict clinical benefit with immunotherapy can improve the selection of tumor types and patient subsets who will respond, illuminate the mechanism of action of novel immunotherapeutic approaches, and potentially inform which patients require single-agent versus various combination strategies, which are increasing in availability. This review focuses on the development of biomarkers for immunotherapy at the soluble, cellular, and genomic levels. Examples of biomarkers in the immunotherapy landscape include (1) soluble factors such as serum proteins, (2) tumor-specific factors such as receptor expression patterns and components of the microenvironment, and (3) host genomic factors.6-8 Despite the interest in biomarker development for immunotherapy, validated biomarkers have remained an elusive goal.

Why Are Biomarkers Challenging in Immunotherapy?

Our incomplete understanding of the mechanisms of action of specific immunotherapies makes it difficult to identify a surrogate marker that adequately captures the process across different classes of drugs.9 Many published analyses of potential predictive biomarkers for immunotherapy are retrospective, with limited extension into large prospective trials. In addition, there has been substantial variability in standardization, measurement, and interpretation of early biomarker assays.10 Furthermore, biomarker development in immunotherapy is challenged by the fact that immunotherapy targets are often inducible and dynamic over time and location. This is a function of the complex tumor microenvironment and the contribution of immuno-editing to the immune milieu. The tumor microenvironment involves complicated interactions between several types of infiltrating immune cells such as monocytes, neutrophils, dendritic cells, T and B cells, eosinophils, basophils, mast cells, and natural killer (NK) cells, as well as the heterogeneous tumor cells themselves and their companion stromal cells, including tumor-associated macrophages, fibroblasts, adipocytes, and endothelial and other cells.11 The local environment is further complicated by “microniches” created by alterations in perfusion, oxygenation, electrolyte levels, and the subsequent development of resistant tumor cells surviving in nutrient- and oxygen-deprived conditions.11,12 Thus, these microniches likely represent distinct microenvironments with different cell types and factors, all within one tumor deposit. Finally, incomplete immune-editing may result in selective pressure on tumor cells, resulting in resistant tumor cell clones and immune escape.11

Despite these challenges, clinical research of immunotherapy over the last several years has confirmed the importance of tumor-infiltrating lymphocytes within the tumor microenvironment as having both prognostic and predictive value for patients with cancer and for treatment with immunotherapy, respectively. There have also been several trials of T-cell checkpoint inhibitors in which PD-L1 expression in the tumor microenvironment has been associated with more favorable outcomes, although this has not been uniformly demonstrated. Other groups have used a larger panel of gene signatures, including T helper (Th) 1 cytokines, chemokines, and other factors, that correlate with therapeutic responses. These studies collectively suggest that there may be host, tumor, and immune factors that can be used for biomarker development. The importance of the tumor microenvironment has been appropriately stressed, but, practically, the ability to use serum or peripheral blood biomarkers is of major clinical utility. We will explore the status of current biomarker candidates from both compartments (Table 1). 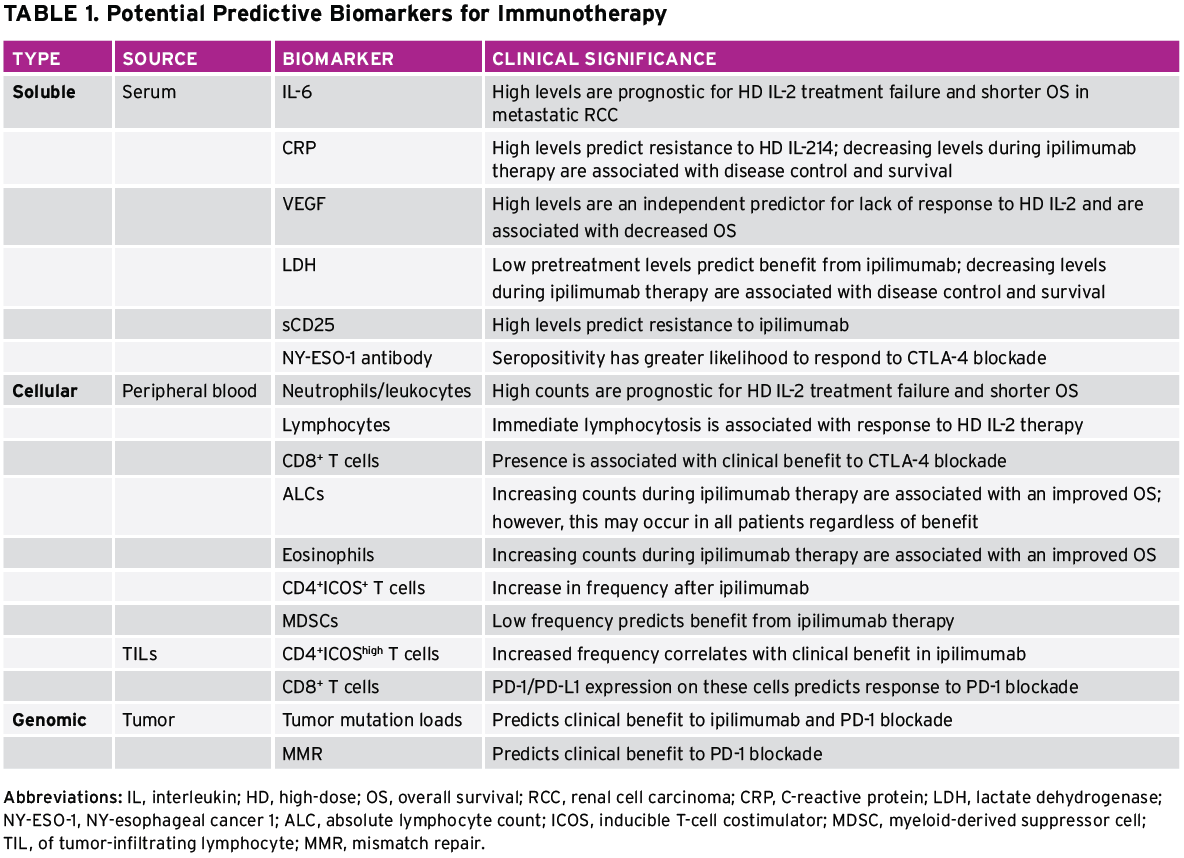 Candidate biomarkers from serum, plasma, or peripheral blood must be accurately and reproducibly measurable, clinically feasible, cost-effective, and prospectively validated in randomized clinical trials. Putative biomarkers in blood might be soluble factors such as serum proteins, circulating tumor DNA, or other cellular factors such as tumor cells, T-cell subsets, or other immune cell populations. The serum factors may be single or could include a panel of factors preferably measured by a single, validated assay. To date, most published analyses of peripheral blood biomarkers in immunotherapy have been retrospective and hypothesis generating, although important information has been gained that illuminates the mechanisms of clinical benefit with some approaches and has helped inform subsequent clinical trial design.

The potential role of soluble serum proteins was first suggested by studies of high-dose interleukin-2 (HD IL-2) among patients with advanced melanoma and RCC in the 1990s. High pretreatment serum levels of IL-6 and C-reactive protein (CRP) were identified as possible prognostic markers for treatment failure and shorter overall survival (OS) in metastatic RCC after IL-2 therapy.13 Later, a French multi-institutional study revealed that high pretreatment serum values of CRP were independent predictors of resistance to IL-2 therapy among patients with metastatic melanoma.14 More recently, in a retrospective analysis of patients with advanced melanoma, pretreatment serum VEGF and fibronectin, as measured by a customized proteomics array, were found to inversely correlate with clinical response to IL-2 treatment.15 In this trial, high levels of these proteins were associated with lack of clinical response and decreased OS. A prospective study of patients with melanoma being treated with IL-2 (Melanoma SELECT) has been completed and will help to confirm the validity of these markers as predictive biomarkers.

Elevated levels of VEGF and CRP have similarly been associated with clinical outcomes for patients treated with ipilimumab, an antibody that targets the T-cell checkpoint CTLA-4 and was approved by the FDA in 2011 for the treatment of patients with advanced melanoma. In an analysis of sera collected from 176 patients with melanoma treated with ipilimumab, pretreatment VEGF of 43 pg/mL or greater was associated with decreased OS.16 In addition, elevated serum lactate dehydrogenase (LDH) levels have demonstrated a negative predictive value, with limited long-term benefit from ipilimumab treatment found among patients with baseline serum LDH greater than twice the upper limit of normal in a cohort of 166 patients from the Netherlands.17 These findings were also reported in an independent cohort of 64 patients from the United Kingdom. Simeone et al18 also found that decreasing levels of serum LDH and CRP between baseline and the end of ipilimumab treatment at week 12 were significantly associated with both disease control and survival for 95 patients treated with ipilimumab (p = 0.0001). Although they are often commercially available, these laboratory assessments are not factored into current clinical algorithms for making treatment decisions.

Another soluble factor that has been proposed is baseline serum concentrations of soluble CD25, the alpha chain of the IL-2 receptor, which independently predicted OS in a large retrospective trial of 262 patients. Low levels of CD25 were associated with favorable outcomes and elevated levels predicted resistance to ipilimumab therapy, a finding rooted in preclinical studies demonstrating that blockade of the IL-2 receptor subunits abrogated the antitumor efficacy of CLTA-4 blockade.19 It is not currently clear whether these biomarkers are predictive or merely prognostic factors. The prospective SELECT trial may help clarify this important distinction.

Similar to serum-soluble factors, cells in the peripheral blood, such as T cells, NK cells, dendritic cells, macrophages, and tumor cells, have been studied as both prognostic and predictive factors in multiple clinical trials. Elevated peripheral blood neutrophil and monocyte counts were associated with poor survival among patients with metastatic melanoma20 and were an independent prognostic factor for short OS among patients with stage IV melanoma undergoing IL-2–based immunotherapy in the retrospective EORTC 18951 study.21 Interestingly, neutrophil and monocyte counts did not predict clinical benefit in a recent retrospective trial of 36 patients treated with ipilimumab, although an early increase in eosinophil count was associated with improved clinical benefit,22 a finding reported previously23 that can perhaps be explained as a sign of a developing inflammatory response. In this analysis, myeloid-derived suppressor cells (MDSCs), a heterogeneic immuno-regulatory population of immune cells, were also negatively correlated with clinical benefit. This finding was consistent with reports of poorer prognosis for patients with increased MDSCs during the first 24 weeks of treatment and improved outcome with low baseline MDSC counts.24,25

Lymphocytes are perhaps the most frequently studied peripheral blood component as predictors of response to immunotherapy. It is well established that initial lymphopenia and rebound lymphocytosis are hematologic side effects of IL-2. A strong positive association between clinical response and the degree of lymphocytosis immediately after therapy has been reported.26 In a study of ipilimumab treatment, decreasing regulatory CD4+FoxP3+
T cells and increasing absolute lymphocyte counts (ALCs) during treatment were significantly associated with both disease control and survival.18 This same trend of increasing ALCs correlating with improved clinical benefit has been reported elsewhere,23 but a pooled analysis of data from several studies noted this increase among all patients treated regardless of benefit.27

Finally, the presence of induced autoimmunity has long been hypothesized to predict clinical benefit from immunotherapy. Metastatic melanoma has been associated with spontaneous antibody formation to a variety of common tumor antigens, including differentiation antigens gp100, tyrosinase, and Melan-A/melanoma antigen recognized by T-cells 1 (MART-1), as well as cancer/testis antigens melanoma associated antigen 3 (MAGE-3) or NY-esophageal cancer 1 (NY-ESO-1). As many as 50% of patients with advanced melanoma with NY-ESO-1–expressing tumors spontaneously develop antibody.29 The patients with NY-ESO-1 seropositivity at baseline showing responses or with seronegativity showing a seroconversion had a greater likelihood of experiencing clinical benefit 24 weeks after treatment with ipilimumab (an anti–CTLA-4 antibody) than their seronegative counterparts.30