Syria is now entering its fifth year of war. As a result of the devastating conflict, over 250,000 Syrians have been killed, 5 million refugees have fled to neighboring countries, and 7.6 million people have been internally displaced. The 10.8 million Syrians who live in besieged areas (Syria is divided into besieged and government-controlled regions) face severe shortages in several domains, including food, shelter, and medical care. International medical and humanitarian organizations have not been able to enter Syria to offer relief to local populations.

Cancer care has fallen the way of other scarce medical resources in Syria, with severe shortages in access to oncologists, diagnostic tools, medications, and specialized treatments such as blood transfusions. An estimated 200,000 Syrians have died from chronic diseases, including cancer, due to delayed diagnosis, lack of screening programs, lack of continuity of care, treatment interruptions, and threats to medical personnel. Since 2013, the majority of health care clinics have been destroyed, leaving only 47% of Syrian hospitals partially functional; for the few functioning medical clinics, patients who cannot pay are turned away.

In light of the rapid decline of cancer care in the country, a group of researchers from across Syria and the United States distributed surveys to cancer care specialists and general practitioners to assess the availability of cancer care across seven regions in Syria, including the government-controlled cities of Damascus, Latakia, Homs, and West Aleppo, and the besieged cities of East Ghouta, East Aleppo, and Idlib. The results of the survey are described in the Journal of Global Oncology (JGO) article, “Cancer Care at Times of Crisis and War: The Syrian Example,” published online ahead of print, August 31. The survey was carried out with the help of the Syrian American Medical Society (SAMS).

In some besieged areas, zero access to oncologists or chemotherapy

The survey revealed severe shortages in the availability of hematologic and surgical oncologists, and specialized pathologists across the seven major Syrian regions, as well as severely limited access to treatments such as chemotherapy, specialized surgery, and bone marrow transplantation (see Table below). For example, according to the survey given to cancer specialists, only Damascus, among the seven regions, offers preventive screening measures such as mammograms, colonoscopies, and pap smears, and in East Aleppo, there are no oncologists or pathologists to serve the population of 500,000 people. 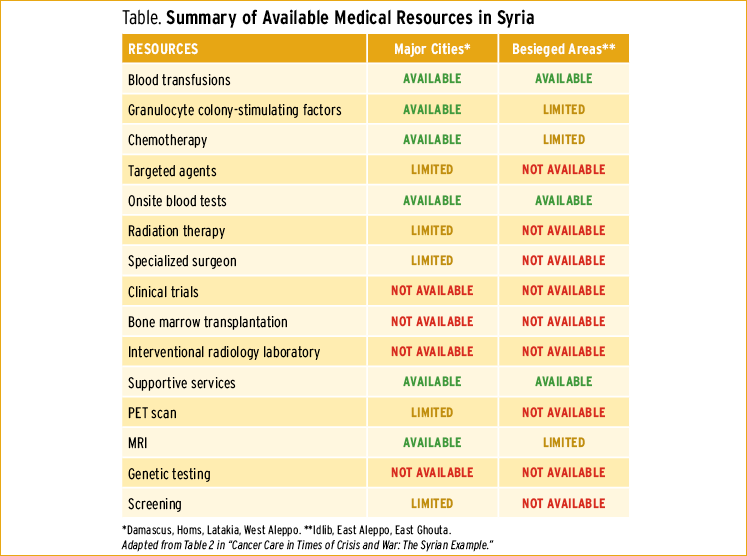 Survey data was also gathered from general practitioners in East Aleppo, Hama, and Idlib (the largest cities outside government control but still under conflict). According to the responses, there were no certified oncologists in the entire city of Idlib, and only one physician who had 1 year of training in oncology. None of the general practitioners in these three cities confirmed the availability of chemotherapy drugs.

“One of the major goals of this study is to try to open people’s eyes to the cancer field in Syria, and shed light on a situation that not many people are paying attention to. What we show in our study is that there are great deficiencies and tremendous needs in cancer care in Syria,” said Bassel Atassi, MD, the study’s corresponding author and SAMS member.

Dr. Atassi explained that one of the main causes of the shortages in cancer care is the destruction of health care infrastructure. “In July 2016 alone, there were 43 facilities that were targeted in Syria. That was only in 1 month—you count how many months and years this conflict has been going on, and you can understand how many facilities have been destroyed. And certainly, there have been more facilities targeted since then,” he said. “Unfortunately, tomorrow, compared to today, more people will die in this conflict and more hospitals will be bombed.”

The authors state that one possible way to address the disappearance of health care facilities is to create protected no-fly zones in which patients could receive basic diagnostics and treatment services. The authors also suggest that patients should be taught about self-screening and remain aware of their exposure to possible risk factors. In addition, the authors recommend using online consultation with cancer experts, in the same way virtual meetings are currently used in Syria to treat trauma injuries and chronic disease.

As for the two study coauthors who were working as oncologists in Syria while the study was being carried out, one has since left for France. The doctor who remained is the only medical oncologist left in the besieged area next to Damascus, home to 350,000 people.

Dr. Atassi is a hematologist/oncologist at Little Company of Mary Hospital in Evergreen Park, IL, and a clinical assistant professor at Chicago Medical School. He has served on the Board of Directors, and is currently an active member, of SAMS, a humanitarian and medical organization that harnesses the talents of Syrian-American health care professionals and channels them toward medical relief for the people of Syria and the United States. He has been an ASCO member since 2010.

Abstract of the original JGO article.

PDF of the original JGO article.

The Exclusive Coverage series on ASCO.org highlights selected research from JCO, JOP, and JGO, with additional perspective provided by the lead or corresponding author.

I find some incorrect informations about the avialable medical resources in Syria :

Bone marrow Transplantation : there is three units in Damascus

Thanks to consider these informations ,