October 2010 Issue: Spanning much of the western coast of South America, Chile has become one of the most stable democratic nations in the region. However, despite significant economic growth that has reduced poverty rates by half, the annual estimated incidence of cancer is still 240 per 100,000 inhabitants, and annual cancer-related mortalities number 120 per 100,000 inhabitants—one of the highest cancer-related mortality rates in the world.

For men, gastric, prostate, lung, and gallbladder cancer are the principal causes of cancer-related deaths, while gallbladder, breast, gastric, and lung cancer are the main causes of cancer-related deaths for women. As with other countries, cancer incidence is higher among the elderly and middle-aged. Despite the lack of studies addressing mortality among different ethnicities, there is evidence of gallbladder cancer being more common in the indigenous population.

Navigating the system
When patients present with cancer symptoms in Chile, they are usually first evaluated by general physicians. Depending on the findings, they are then sent for specialized evaluations and treatment. However, many patients also consult directly with specialists such as surgeons, mastologists, urologists, gynecologists, and medical oncologists.

Chile’s national bureau for specialist certifications in medicine lists only 61 registered medical oncologists and 45 specialists in radiation oncology. The exact number of other specialists is unknown, as there are no common criteria for certification.

Challenges to cancer care
A significant challenge for the development of the oncology community in Chile is that most specialists prefer to work in the private health system, partly because private clinics offer higher salaries. The country’s best oncologists also tend to migrate to the few existing private clinics—specifically, the more advanced oncology centers in the capital city of Santiago. Another challenge is the lack of specialists in palliative care treatment.

The public health system in Chile, which handles 75% of the population, has fewer resources than the private system, which features new technology and better access to pharmaceutical drugs (including targeted therapies). Poorer patients are often restricted to the public system, and low-income patients living in distant villages have even fewer opportunities and less access to novel treatments than low-income patients in urban areas.

When patients cannot be treated in other cities, they are sent to the capital. It is preferred that all large hospitals have their own facilities to treat patients with cancer, rather than having one central cancer center. Although there is an Instituto Nacional del Cáncer (National Cancer Institute), it is a specialized center for particular areas of Santiago, and only one private clinic is dedicated exclusively to cancer care.

Efforts to improve treatment
The GES (Garantías Explicitas en Salud), or Explicit Health Guarantees, is an innovative effort established by the Chilean government to clearly define levels of quality and timeframes of treatment. The government is also working on a policy that would establish access to treatment as a legal right, though it would include only a few cancer types, to be selected based on the best therapeutic results.

Since 2006, the Chilean Oncology Foundation has worked with ASCO to present educational courses and symposia in Chile. In March 2006, Chile’s first Multidisciplinary Cancer Management Course (MCMC) was held in Santiago. In August 2010, a second MCMC was held in conjunction with the pilot “Train the Trainer” course. The Simposio Latinoamericano Gastroenterología Oncológica (SLAGO), or Latin American Gastrointestinal Symposium, was organized as an ASCO–SLAGO Joint Symposium in 2007 and 2009. SLAGO is currently being organized again for April 2011. And earlier this year, the first Long-term International Fellowship (LIFe) was awarded to a Chilean oncologist—Cesar Sanchez, MD—by The ASCO Cancer Foundation®. These courses and awards are contributing factors in the further development of the oncology community in Chile.

AC: Why did you decide to become an oncologist?
Dr. Gallardo: During my last year in medical school, my father got lung cancer. It had been detected during its advanced stage, and he had several strong symptoms. In the city where he lived at that time, the only recommendations were some pain killers—he was almost completely abandoned. The policy there was that medical care was only for those who had a chance of survival. Besides the inhumanity of this, there were no oncologists or palliative care available.

AC: How has being a member of ASCO affected your career?
Dr. Gallardo: Being a member of ASCO is an important aspect of my career. I am imbibed in the philosophy of modern medicine, where I believe science through research gives us the fundamentals of new therapies. With ASCO’s help in organizing local and regional symposia, we—the oncologists of Chile—have begun a new era in which the spread of knowledge of modern oncology and the collaboration with others to develop high-quality treatments have been accelerated.

AC: How can ASCO collaborate with the Chilean oncology community in the future?
Dr. Gallardo: Stronger prevention efforts require better access to screening and early diagnosis, and the development of patient associations and patient leaders are crucial challenges here. As a result, the “Chilean Week Against Cancer” was created to embrace these and other goals. If this initiative is empowered by ASCO, we will be even more successful. The creation of Simposio Latinoamericano de Gastroenterología Oncológica (SLAGO) was made possible thanks to ASCO, among others. SLAGO is beginning to grow and is helping to accelerate oncology. Maintaining ASCO’s support is crucial to its continued success.

The ASCO Cancer Foundation® is accepting applications for the International Development and Education Award (IDEA). The IDEA program helps early-career oncologists from developing countries expand their current knowledge, earn continuing medical education, and share their learning experience with colleagues in their home countries. The award also helps recipients establish strong relationships with ASCO members who can serve as scientific mentors.

The monetary award covers expenses associated with attending the Annual Meeting (to be held June 3-7, 2011, in Chicago, Illinois), as well as a three-day visit to a cancer center in the United States or Canada. Award recipients also receive a complimentary three-year ASCO membership, including a subscription to the Journal of Clinical Oncology. The deadline to apply for IDEA is January 12, 2011. Visit ascocancerfoundation.org/idea for more information. 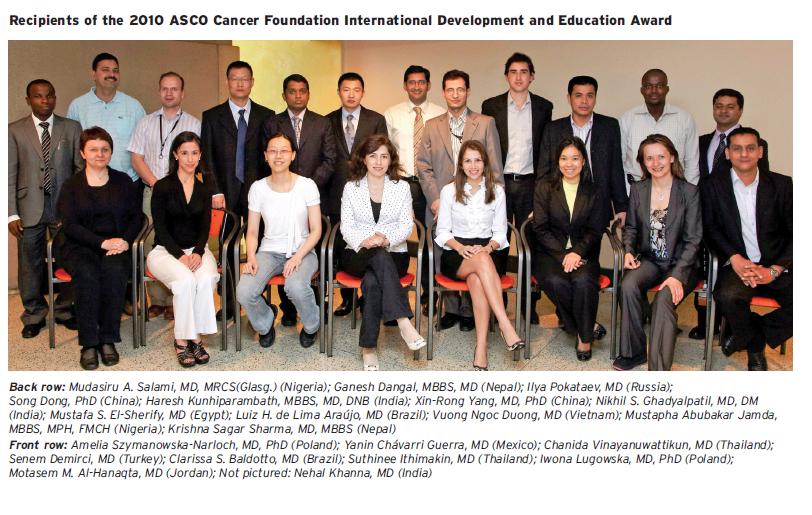 Dr. Erin Parry on Conquering Lymphoma and How the Pandemic Made Donor Support for Research More Vital Than Ever
2022: The Year of the Equity Donor
2021 ASCO Quality Care Symposium Highlights
The Difference Between a Being a Doctor and Being a Physician: Getting the Dog’s Name
Women Who Conquer Cancer: Dr. Beverly Moy Believes That Supporting Women Scientists Can Reduce Inequities in Academic Research Funding