As part of its efforts to ensure the long-term viability of an enhanced, federally funded national clinical trials network, ASCO developed a report that analyzes progress and implementation of IOM’s March 2010 report on the Cooperative Group Program. 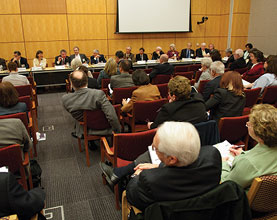 ASCO is committed to initiating activities, working with stakeholders, and advocating with policymakers for full implementation of the IOM report recommendations. Last March, a workshop jointly sponsored by ASCO and IOM assembled all stakeholders in the Cooperative Group system to discuss IOM’s recommendations and identify activities planned. ASCO’s status report summarizes information presented at the workshop and progress made to date, and outlines areas where progress is still needed in order to meet IOM’s recommendations. ASCO is working with IOM to plan a follow-up workshop in 2012.

Overall, ASCO is pleased with the work that has taken place since the IOM report’s release. Stakeholders have initiated activities to begin to address all 12 IOM recommendations.“ASCO is a strong proponent of preserving and enhancing our federally funded clinical trials system,” said ASCO President Michael P. Link, MD,in a statement about the status report. “The IOM committee developedevidence-based support for the valueof our system and the essential roleit plays in the prevention and cureof cancer.”

However, some areas where work has not yet been initiated involve:ASCO will periodically issue updates to its status report and welcomes feedback on the summary information it provides.Visit asco.org/groupreorganizationto view the latest progress andimplementation of IOM’s March2010 recommendations, or send an email to researchpolicy@asco.org withcomments, questions, or requests for additional information.