ASCO and the National Cancer Institute (NCI) have a rich history of collaborations worldwide, particularly among developing nations. In 2002, NCI was one of the charter sponsors for the Conquer Cancer Foundation of ASCO International Development and Education Awards (IDEAs), one of ASCO’s first programs to provide support for early-career oncologists in low- and middle-income countries. NCI has also played a leadership role in sponsoring recipients of the IDEA in Palliative Care (IDEA-PC) program, which started in 2011. Furthermore, NCI has collaborated with ASCO’s International Clinical Trials Workshop series in several countries in Latin America and India.

This program grew out of concern—expressed in recent years—by ASCO members who sought more training in the area of clinical research in economically emerging countries.

Most recently, ASCO and NCI have been building upon their collaborative efforts to help reduce the burden of cancer worldwide, particularly in low- and middle-income countries, through NCI’s new Center for Global Health (CGH), created in 2011.

“The Center for Global Health supports NCI’s goal to advance global cancer research, build expertise, and leverage resources across nations to address the challenges of cancer and reduce cancer deaths worldwide,” as stated on the NCI website (cancer.gov). The primary functions of the Center are to: 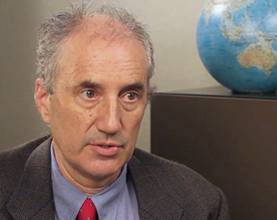 “Global health issues have been a high priority for Dr. Harold E. Varmus since he was the NIH Director in the 1990s, and the same is true for current NIH Director Dr. Francis Collins, who made global health one of his top five priorities at NIH,” said CGH Director Ted L. Trimble, MD, MPH. When Dr. Varmus returned to NIH in 2010 to lead NCI, creating CGH “was on his short list of things to do,” Dr. Trimble added.

CGH serves as the primary source by which ASCO can approach NCI with new overseas initiatives, determine if NCI would be interested in collaborating, and explore potential assets and resources that NCI could contribute.

“I see CGH working very closely together with ASCO going forward,” said Dr. Trimble. “There’s clearly a lot of expertise and enthusiasm among ASCO members and their leadership, and we’re delighted to join with them to help reduce the burden of cancer around the world, as well as to help do the research to guide cancer control around the world.”For example, during the 2012 ASCO Annual Meeting, Dr. Trimble met with the ASCO International Affairs Committee to update the panel on NCI’s goals and activities for global health. “One big project for NCI is helping countries develop and implement national cancer control plans,” Dr. Trimble said. “We want to have the help of ASCO officially as well as ASCO members in countries around the world as they design and implement their cancer control plans.”

The creation of CGH further serves as a testament to NCI’s commitment to international work. “The CGH can help NCI better partner with our sister NIH institutes, ASCO, and other organizations to build on the great work that’s been done in terms of controlling infectious diseases in the developing world and to expand the range of NCI’s research globally in epidemiology and cancer genetics,” Dr. Trimble said. “We’ll also be looking at how together we can deliver cancer care, prevention, and screening interventions more effectively around the globe.”