Dr. Markham of the University of Florida Health, is an associate professor, a gynecologic oncologist, and an avid chef. She shares her not-so-hidden talent for cooking on her personal blog, The Merry Gourmet (merrygourmet.com), a passion project she started more than 7 years ago. Today, her blog has grown from an outlet to share her latest recipes to a collection of stories about travel, family, challenges, and life, all brought together around a good meal. She reflects on her cooking and blogging adventures with ASCO Connection—and generously shares her recipe for the perfect banana bread.

How did you get into cooking?

MJM: I decided that I should learn to cook when I was a chief medical resident and my daughter, Madeline, was an infant. Cooking was something I never had an interest in until then. My mother hated cooking, and while my father seemed to love it, he only cooked for holiday meals and parties. Dad was a pro on the grill, and his oyster roast parties were legendary. But in that first year with our daughter, I knew that I wanted her to see that cooking could be fun, and I wanted to role model that for her. I poured over cooking magazines and cookbooks, and I watched Food Network whenever possible. Eventually, I became comfortable with basic concepts and the more I cooked, the more comfortable I became with trying new techniques or cuisines. It took practice, but eventually I learned to not always follow a recipe to the letter, and to adapt and improvise in my cooking.

What inspired you to start a blog?

MJM: My son, Oliver, was born in late 2006, in the middle of my hematology-oncology fellowship. While I was on my 6-week maternity leave, I grew bored during the day, especially when he napped. I had discovered the joy of reading blogs, primarily mommy blogs at the time, and I decided to start my own, mostly to document our family life for our close family and friends.

I’d been blogging for just over 3 years when my mother emailed me. “Why are all of your posts about food?” she asked. I realized that she was right. Somewhere along the way, my writing about family had turned into writing about what our family was eating for dinner. One weekend in early 2010, with very little forethought, I started a new blog—a food blog—and named it The Merry Gourmet, a spin-off of my first name.

Where do you get your inspiration for blog topics and recipes?

MJM: In the beginning, I challenged myself to cook with new foods or cook more complicated recipes, and those recipes and experiences were my inspiration for many blog posts. I found that I loved baking—and cakes and cookies certainly photograph better than casseroles or bowls of soup—so I focused more and more on desserts. Often my inspiration was an upcoming holiday or special occasion, such as baking a strawberry cake for my husband’s birthday or making my husband’s family’s famous cornbread dressing for Thanksgiving. Sometimes, though, I was inspired by something the kids said or did, or by a memory spurred on by the scent of something baking, or a conversation about a favorite meal.

Later, the writing itself became more important to me than the recipe I was featuring in any given post. When my father’s dementia progressively worsened, and when he died in 2014, I used the blog to write about that experience. Food sometimes had a starring role in the post, sometimes just a supportive role, and other times, food wasn’t mentioned at all. What was important was the ability to be creative, to reflect, and to write, and to have the dedicated time and space to do this.

As a busy oncologist, how do you find the time for your personal passions?

MJM: I think it is important to create time in the day or in the week to focus on one’s personal health and well-being. For me, especially early on, blogging filled this role. I often carved out weekend time, maybe several hours on a Saturday or Sunday afternoon, to create and photograph a recipe. Later, possibly the next day or during the evening hours of the week following, I’d spend time writing and rewriting until the post felt right.

As I’ve progressed in my career and as my children have gotten older, my time is definitely more limited. It’s the uncommon Saturday or Sunday where we have nothing planned and I can spend hours in the kitchen or at the computer. If I have something in my mind that I want to write, though, I will find the time. It’s all about setting priorities.

MJM: I began experimenting with pumpkin pie recipes in the first year of the blog. I was determined to perfect my pumpkin pie recipe in time for Thanksgiving. I made several versions over the course of a month or two, and finally settled on what I thought was a winner at the time: one with just the right amount of cinnamon and spices, but not cloyingly sweet. (What I didn’t know then was that I’d really discover the winning recipe 2 years later.)

One Saturday in that first year, I prepared a pie from scratch, from crust to filling, with the goal of photographing and writing about it later in the day. The finished pie was beautiful, and the filling set up just as I wanted, with no cracks to mar the surface. After photographing the pie, I cut out a slice and offered it to my daughter, who was 6 at the time and always proud to be the first taste-tester. She took a bite and, with a half-smile, half-grimace, said, “It’s… good?”

I’d forgotten to add the sugar.

Your recipes have been featured all over the web, including The Huffington Post, LA Times, and The Stir. What’s it like to have your recipes shared so widely?

MJM: The most surprising and wonderful thing to me was that people actually read the blog. I’m always shocked and flattered that people may want to read what I write or cook a recipe after reading about it on my blog. It’s a weird feeling, honestly. Even now, as I’ve written less over these last couple of years, I get emails from people—strangers—asking when I’m going to write again, letting me know they miss my posts.

What’s the cooking utensil you can’t live without?

MJM: Every summer for the past 13 years, we’ve spent a week at our favorite beach in the panhandle of Florida. We rent a house that we share with one or two other families, and one criteria is a nice kitchen. When I pack for the beach, there’s always a box of kitchen items that travel with me to the beach house. The first thing I grab—and if I could only take one thing, this would be it—is my Misen chef’s knife. I adore that knife.

You also write about travel in your blog. Do you have a favorite destination?

MJM: When my children were 5 and 8, we traveled on our first big summer vacation, with “big” meaning that air travel was required. We took them to San Francisco, Yosemite National Park, and Monterey. Now, each summer, we have kept our tradition of one big vacation and our week at the beach just before school starts. Some of my favorite places we’ve traveled are within the United States: Grand Teton National Park, Yellowstone National Park, and Glacier National Park. Glacier was a wonderful surprise, and I’m trying to figure out how we can fit in a repeat trip. We loved Banff National Park in Canada. I highly recommend the hike to the Plain of Six Glaciers Teahouse from Lake Louise in Banff. This summer, we toured Alaska, both by cruise ship and on our own in a rental car, and I’m still processing how amazing that trip was. Eventually, I’ll write about it, once I edit the 1,000+ photos I took.

After nearly a decade of blogging, what does The Merry Gourmet mean to you?

MJM: My blog has served various purposes for me over the last 7 years. Initially, it served as a home for my recipes and a repository of my thoughts on cooking for my family, old family recipes, and memories triggered by foods or meals. I used the blog to publicly challenge myself in the kitchen, and as a result, I am a confident cook, willing to try things I never thought I’d succeed at. Later, my blog served as an outlet for my reflections on dealing with various challenges in my personal life. As my father was in his last year of life and during my grieving over his death over the next couple of years, I processed the loss publicly and gained the support of many readers who’d been through similar experiences. My blog, and the connections I made through it, helped me heal. Now, although I haven’t written a new post in 8 months, my blog feels like an old friend, just ready for me to reach back out when I need her again.

“I believe too many banana breads are ruined by nuts, so there are no nuts in this recipe. Feel free to add them if nuts are your thing. As is, this banana bread is moist, with an almost creamy texture. It is, simply, a perfect banana bread.” —Dr. Markham 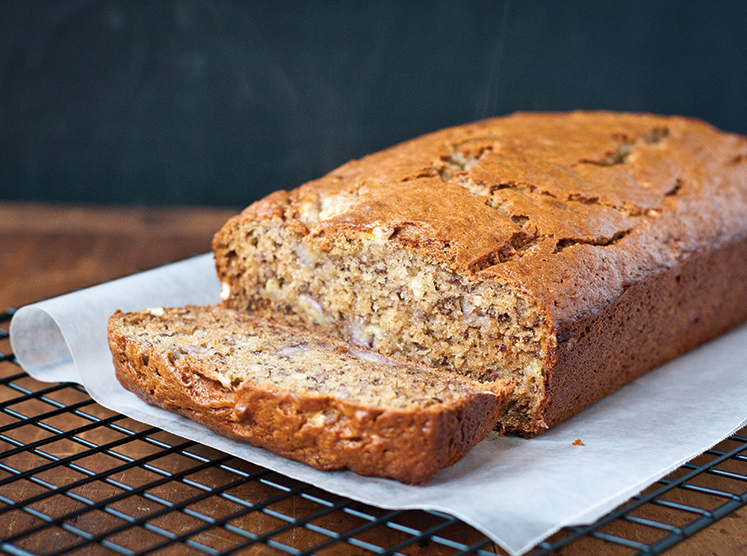 Preheat oven to 350 degrees and place rack in the middle of the oven. Butter a 9-by-5-inch loaf pan.

In a small bowl, whisk together the flours, salt, baking soda, and cinnamon.

Use the back of a fork to mash the bananas in a large bowl. Add the melted butter, sugar, beaten egg, vanilla, and sour cream, and mix well. Finally, add in the flour mixture and stir until well incorporated. Pour batter into the buttered loaf pan and bake for 55 to 60 minutes, or until a toothpick inserted in the center comes out clean.