This year, the largest single decline ever in annual cancer mortality rates in the United States was reported.1 Indeed, annual cancer mortality in the United States has been declining steadily for decades. In 1970, there were 625,000 new cases of cancer in the United States, and 3 million survivors. The 5-year survival rate was 49%. In 2030, 22.1 million survivors are predicted,2 with a 5-year survival rate greater than 70%.3 Most of the reduced mortality is the result of longstanding efforts in cancer prevention and early detection although treatment advances play an increasingly important role in many diseases, notably non-small cell lung cancer and melanoma.

The Catalyst for Major Advances in Cancer Research and Care

Much of the progress of the past 5 decades, chronicled in ASCO’s Cancer Progress Timeline, was catalyzed by the National Cancer Act, signed into law by President Richard Nixon in December of 1971.

The act elevated the position of the National Cancer Institute (NCI) Director to a presidential appointment and granted broad authority to the Director to plan and develop a National Cancer Program that included NCI, other research institutes, and other federal and non-federal programs. It established the procedure for submitting NCI’s annual budget directly to the President and Congress, providing an opportunity for the NCI Director to lay out the nation’s needs and priorities to accelerate progress against cancer. And, it provided an infusion of funds to NCI that was used for, among other things, creation of the first NCI-designated cancer centers. The cancer centers in many ways transformed the organization of cancer research and care by bringing researchers from many disciplines together to focus their efforts on understanding, preventing, detecting and treating cancer, and galvanizing a national focus on cancer as a preventable, treatable, and, ultimately, curable disease. The cancer clinical trials networks established by NCI in 1955, and expanded substantially after 1971, have since conducted pivotal studies leading to the cure of most childhood malignancies, the development of life-prolonging adjuvant chemotherapy for many cancers, curative combined modality treatments for some cancers, and a focus on patient engagement and advocacy to ensure that clinical trials ask meaningful questions and explore outcomes important to patients.

There is little doubt that the major contributor to reduced cancer mortality over the last 50 years has been reduction in the use of tobacco products. The 1964 Surgeon General’s Report4 described the link between cancer and tobacco, and tobacco control efforts of the last 50 years—including restrictions on advertising, smoke-free environments, limiting sales to minors, and funding tobacco control efforts from cigarette taxes and legal settlements—have led to substantial declines in cancer deaths for tobacco-related cancers. And, as we have learned more about other risk factors for cancer, vigorous public health efforts, including promoting hepatitis B virus and HPV vaccinations, healthy lifestyles, and screening for cervical, colorectal, breast, oral, lung, and skin cancers have prevented cancer initiation or led to its detection at an early, curable stage.

By 1970, abnormal proliferation, local invasion, and metastasis were recognized as hallmarks of every cancer, and combination chemotherapy regimens were developed that produced extended remissions and occasional cures for some cancers, such as childhood leukemia and Hodgkin lymphoma. Although only partial responses were achieved in the most common solid tumors, chemotherapy was now proven to cure cancer.

A revolution in cancer biology began in the 1980s. The observation that many cancers had recurring non-random, chromosomal translocations and deletions led to isolation of the first cellular oncogene, the discovery of tumor suppressor genes, and the recognition of cancer as a fundamentally genetic disease caused by somatic gene mutations that lead to dysregulation of key molecular pathways.5

The Human Genome Project and The Cancer Genome Atlas, enabled by invention of gene sequencing technologies, produced a comprehensive description of variations in the normal human genome that may predispose to cancer and identified somatic mutations that are key drivers of many cancers. Indeed, mutations disrupting specific cellular functions (e.g., signal transduction, cell cycle regulation, apoptosis, DNA repair, angiogenesis, inflammation, and immune surveillance) are now known to drive essentially all cancers. These profound insights into cancer biology coupled with advances in computational biology, structural biology, and combinatorial chemistry allowed development of highly targeted drugs leading to a paradigm shift in cancer drug discovery and development, from empiricism to mechanism-based approaches.

Two early breakthroughs during the 1990s exemplified this approach: the development of trastuzumab, targeting HER2 amplification in breast cancer, and imatinib, targeting the BCR-ABL1 oncoprotein in chronic myeloid leukemia. More efficacious and better tolerated than traditional chemotherapy, these treatments radically transformed the prognosis of patients with these cancers and inspired the hope, not yet fully realized, that all cancers might be treated by a “precision medicine” approach through which disrupted molecular pathways in each patient’s tumor are identified and targeted with precision therapies.

About 100 targeted therapies are now commercially available to treat cancers that harbor specific genomic alterations.6 Many produce remarkable remissions of difficult-to-treat cancers, such as non-small cell lung cancer and metastatic melanoma, thereby transforming the treatement of patients with these diseases. However, long-term disease control is rare due to the emergence of drug resistance in most cases. A deep understanding of how cancers evade immune surveillance, in part by upregulating immunosuppressive proteins, has emerged in the past 20 years and has led to yet another transformation of cancer care. Targeted monoclonal antibodies (checkpoint inhibitors) have been developed that reverse tumor-induced immunosuppression and have proven highly effective in a range of tumor types leading to long-term disease control and the possibility of cure in some patients with advanced metastatic cancer. Key to the effective use of both targeted agents and immune checkpoint inhibitors has been the development of analytically validated tumor biomarker tests that enable selection of patients most likely to benefit from these precision therapies.

Now in its 16th edition, Clinical Cancer Advances 2021: ASCO’s Report on Progress Against Cancer summarizes the most important research advances in cancer research each year, forming the basis for the ASCO Cancer Progress Timeline. The timeline depicts many other scientific advances in cancer prevention, screening, and treatment over the past 50+ years, including the introduction of computed tomography scans allowing more precise staging, evaluation, and treatment of tumors, the development of effective supportive care treatments such as hematopoietic growth factors and antiemetics, and the development of vaccines that target oncogenic viruses. Collectively, these advances, and more, account for the remarkable progress against cancer of the last 50 years (see Fig. 1 below: Milestones in Cancer Research, Policy, and Care). None of this would have been possible without a robust and sustained national commitment to eradicate cancer, effective public policies to reduce exposure to environmental cancer risks, public education to raise awareness about high-risk personal behaviors, and widespread deployment of strategies to detect cancer at its earliest and most treatable stages. Many cancer advances were directly attributable, or could trace their development, to federal research funding, and nearly all of them are the result of rigorously conducted clinical trials, made possible by the participation of thousands of individuals with cancer.

(Milestones noted in blue are anticipated to be major advances during the current decade.) 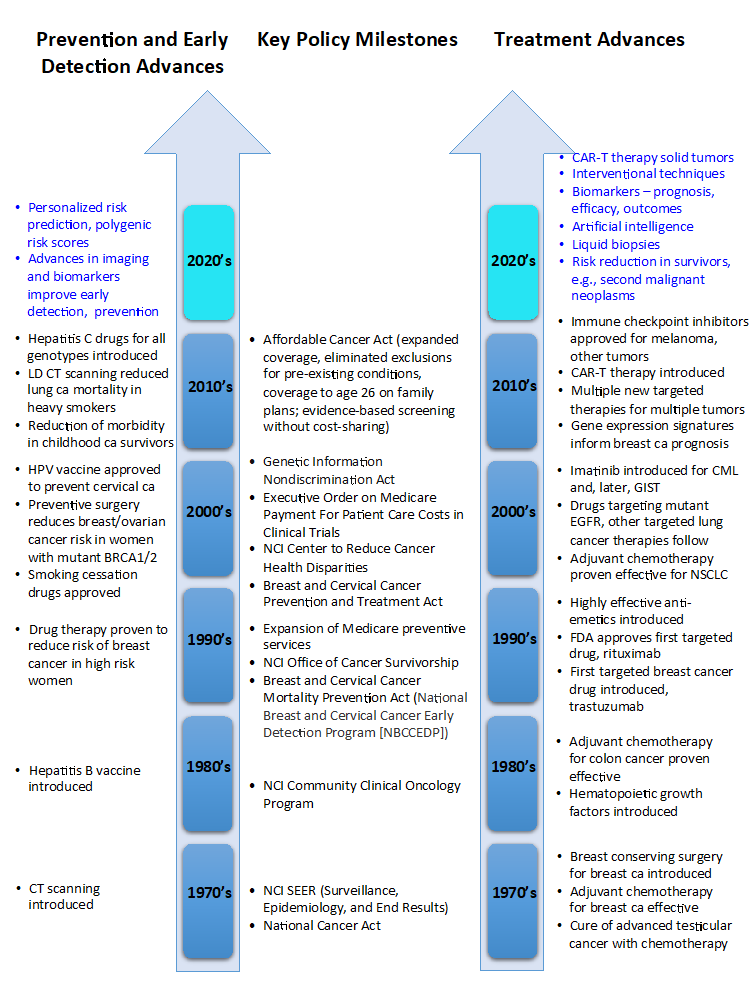 Accelerating Progress Into the Future, for Everyone Everywhere

Sadly, the benefits of this progress have not been equitable. Disparities in access to high-quality care, participation in clinical trials, morbidity, and survival persist, particularly among minority, older, and rural populations. The rapidly rising costs of technology and drugs are exacerbating these inequities. Future progress will be slowed without policies that address the social determinants of health, promote equitable participation in clinical trials, and foster universal access to high-quality cancer care. ASCO is committed to achieving health equity in cancer research and care, and has developed a range of resources to help stakeholders in the cancer care community better understand and take action to meet this important goal. As we celebrate the enormous progress in cancer research and care made in the last 50 years, catalyzed by the signing of the National Cancer Act, we must acknowledge that we have yet to achieve ASCO’s vision of “A world where cancer is prevented or cured and every survivor is healthy.” Doing so will require a renewed national dedication to confronting cancer as both a public health problem and a consequence of our societal deficiencies and personal behaviors. We have learned much from the COVID-19 pandemic and as it recedes, we must remember that cancer will still be with us as a major cause of morbidity and mortality in this country and around the world. Better and broader application of what we already know, especially in prevention and early detection, as well as ensuring that all patients with cancer have access to essential medicines and supportive care, will yield the greatest reductions in suffering and deaths while we anticipate the definitive therapies of the future.

Amazing to read and learn about the progress in therapies and treatments as well raising the call for more investment and resources to help address inequities in care and costs.  #50years #NationalCancerAct.