Can we forgo whole-breast radiation in women with very early-stage breast cancer? This question has been addressed with two major research approaches. First is the question of whether we could identify a group of patients who could entirely forgo radiation due to very low risk of local recurrence. Indeed, recent data has demonstrated that older women with hormone receptor–positive breast cancer, taking hormone therapy, and with clear surgical margins have similar survival to women who added whole-breast radiation to their treatment plan, although there was a small increase in the risk of local recurrence.

The second question is whether we can limit the extent of radiation, and therefore shorten the treatment time and reduce exposure of normal tissue. In this article, two experts debate the use of intraoperative radiation therapy (IORT), discussing both the risks and merits of this approach. While Dr. Benjamin Smith feels that the data are encouraging but still immature, Dr. Michael Alvarado feels that there is ample evidence that, in carefully selected patients, IORT should be offered as an alternative to standard radiation. This interesting question is of great importance to our patients, who could avoid five weeks of daily radiation with its associated time commitment and toxicity, but clearly remains controversial.Learning to do less rather than more, when more has been the standard, is always a greater challenge than learning to do more. This seems counterintuitive, but we tend to believe that the current standard is the best and are often reluctant to believe that in some settings, less is equally effective. Of course, a rigorous approach to studying this question and solid data is necessary. Read on, and see what you think!

Dr. Rugo is a Professor of Medicine and Director of Breast Oncology and Clinical Trials Education at the University of California, San Francisco, Helen Diller Family Comprehensive Cancer Center. She serves on the ASCO Connection Editorial Board and is an Associate Editor for Cancer.Net, ASCO’s patient information website.

Local control of early-stage breast cancer has improved dramatically as a result of less-invasive surgical strategies that combine breast-conserving surgery (BCS) followed by whole-breast external beam radiation (WB-EBRT).1,2 Nonetheless, 21% of North American women who undergo BCS do not complete the recommended radiation therapy, partially because of cost and inconvenience.3 Researchers have continued searching for opportunities to improve effectiveness and patient tolerability of both surgical and radiation interventions. Accelerated shortened courses of radiation may provide a solution for ensuring that women complete breast irradiation by offering a more convenient and comparably effective alternative.

Numerous observational studies, as well as randomized trials, have demonstrated that local recurrence in the conserved breast is confined to the index quadrant more than 90% of the time. Therefore, targeting the local tumor bed with focused radiotherapy may be sufficient in a majority of early-stage breast cancers. The recently developed technique of intraoperative radiation therapy (IORT) delivered at the time of BCS has shown promising results as a form of partial-breast irradiation.

TARGIT-A trial
This technique has been tested in more than 3,000 patients in the TARGIT-A trial, an international randomized controlled trial, and in close to 2,000 patients in the ELIOT trial.4,5 Utilizing intraoperative radiotherapy with electrons (ELIOT), Veronesi et al. reported outcomes for 1,822 patients who underwent BCS and IORT. At 36 months mean follow-up, the local recurrence was 2.3%, while local toxicity for liponecrosis and fibrosis was 4.2% and 1.8%, respectively.

Vaidya et al. published initial results from the TARGIT trial for 2,232 patients randomly assigned to either standard external beam radiation or intraoperative radiation with the Intrabeam device, which utilizes soft x-rays. At four years, the local recurrence for both arms was statistically equivalent (0.95% vs. 1.2% respectively). The frequency of any complications or local toxicity was similar in both arms. Of course, longer follow-up is needed to confirm these initial results, keeping in mind that even in the event of a slightly higher local recurrence in the IORT arms, they would not be considered negative trials.

TARGIT-A accrued 2,000 patients exponentially in years five to 10—1,200 in the last two—which explains the median follow-up. Follow-up was available for 99% of patients. The trial was overpowered (585 needed for noninferiority), therefore, four-year results are available.6 Phase II studies utilized the 20 Gy dose as a boost.7

Shared decision-making
Allowing patients to choose between two non-equivalent therapeutic options is common practice in breast cancer treatment. In this setting, patients are often making trade-offs between risk of recurrence and quality of life.8 When making a decision between mastectomy and BCS, women are concerned about the risk of recurrence, the need for radiation, and side effects from radiation.9 These factors lead some women to choose mastectomy over BCS followed by conventional WB-EBRT. If BCS is offered with IORT, women may choose BCS over mastectomy, preferring the convenience and reduced side effects of IORT even if it meant a slightly higher risk for local recurrence.

When considering what treatment options should be offered as the field moves forward, the preferences of the patients, who are key stakeholders, should be taken into consideration. These preferences, in addition to clinical trial data and resource considerations, should drive health care innovation.

IORT trials are demonstrating that less-aggressive interventions are effective for women with lower-risk tumors. This is a significant achievement for women and much-needed progress in the ability to tailor treatments for women with early-stage breast cancer. If we can safely accomplish the same outcome in a more efficient, more convenient, and less invasive manner, the medical community should be the first to consider early adoption of this new technique.

Questions remain
This trial began on March 24, 2000, the data were locked for analysis on May 2, 2010, and the results were published shortly thereafter on July 10, 2010. Strangely, for a trial of this magnitude, the median follow-up was not specified in the abstract or text. However, one can deduce from the published table ( 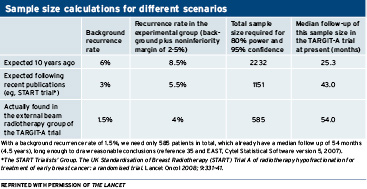 Table 6 in Vaidya JS et al.1) that the median follow-up for the overall cohort at the time of data lock was 25.3 months. A back-of-the-envelope calculation reveals that, if accrual were relatively evenly distributed over the decade during which this trial was open, then median follow-up for the study cohort should be about five years, rather than two years as reported. Even if accrual was skewed toward later years, it is difficult to simulate a scenario in which a trial that is accruing patients over a decade could have a median follow-up of just two years.

This issue raises a concern that many patients enrolled on this study could have been lost to follow-up after two years of treatment, but this issue is not discussed by the study authors. If many patients on a trial were lost to follow-up, this would generate additional uncertainty regarding the true outcome experienced by the average patient, especially if loss to follow-up is due to the patient having an oncologic event.

In the face of uncertainties regarding follow-up from a phase III study, review of the long-term results of the phase II study that preceded the phase III study can be illuminating. However, uniquely in the case of TARGIT-A, the authors embarked on the phase III trial without any phase II data demonstrating the safety and oncologic outcomes of IORT as a sole radiation treatment modality. These shortcomings—unusually short follow-up and lack of applicable phase II data—provoke uncertainty regarding the conclusion endorsed by the TARGIT-A authors that “intraoperative radiotherapy should be considered as an alternative to external beam radiotherapy delivered over several weeks.”

Review of other experienceswith IORT
In light of the limitations of the TARGIT-A trial, review of other experiences with IORT can be enlightening. The European Institute of Oncology has conducted a large, prospective randomized trial of IORT with electrons (ELIOT) compared to standard whole-breast radiation. While not yet published, results presented in May 2012 at the Groupe Européen de Curiethérapie and the European Society for Radiotherapy (GEC-ESTRO) Meeting in Spain indicated that patients randomly assigned to ELIOT experienced asignificantly increased risk of in-breast tumor recurrence.2

No randomized trials evaluating IORT have been conducted in the United States. Memorial Sloan-Kettering Cancer Center has reported a phase II experience with IORT that resulted in a five-year in-breast tumor recurrence risk of 7.7%,3 which is higher than recently reported results with standard whole-breast radiation.4 Long-term results from a University of North Carolina (UNC) phase II trial are awaited, although short-term results are already concerning for excess risk of in-breast tumor recurrence.5

Given these lingering uncertainties about the TARGIT-A results, coupled with potentially unfavorable outcomes in the ELIOT trial and modest control rates in the Memorial and UNC experiences, it is my opinion that IORT remains best confined to the investigational setting.

Dr. Smith is an Assistant Professor in the Department of Radiation Oncology at The University of Texas MD Anderson Cancer Center. He currently serves on the Journal of Clinical Oncology Editorial Board and is a past recipient of the Conquer Cancer Foundation of the American Society of Clinical Oncology’s Career Development Award.

Dr. Rugo: Thank you for your many efforts, including this discussion.

Would one way to address the problem of over-radiation in a preventive and concrete manner be to institute a practice that already exists for the protection of radiation department workers? It is my understanding that the workers are required to wear a badge that keeps count of whatever radiation exposure they receive. If a badge would be mandatory for each patient for each exposure and the amount of exposure the machine actually delivered was recorded for each treatment and a continuous tally was maintained in the patient record, there at least be a clear way indicate and to watch for and stop overexposure at the earliest opportunity.