As molecular medicine evolves, pharmaceutical companies are essential to progress in cancer care. However, patients suffer from financial toxicity as the cost of cancer drugs far exceeds inflation.1 Most major drug corporations are publicly traded companies whose shareholders pressure them to maximize profits.

The following are seven ways that we can convince pharmaceutical companies that doing what’s right for patients is better for business than succumbing to shareholder pressures.

The simplest step is to raise awareness about the problem. The more we discuss serious reforms, the more likely pharmaceutical companies will stop excessive rate hikes. The New York Times recently reported that the cost of drugs didn’t rise as quickly when government intervention appeared likely.2

We can’t count on government pressure constantly, but we can interact with pharmaceutical companies through direct tweets, Facebook comments, and letters. We can also raise awareness by sharing our stories with each other.

I’ll share one of mine. I choose to pay $800 for 1 month of acne medication, but I don’t need it to survive. However, I have patients who may need some cancer drugs to live longer but can’t pay or have to put their families in debt. Some patients pay $10,000 a month for medications. More people in the United States may be insured, but we’re still paying more for health care than other high-income nations. Middle- and high-income families have had increases of 10% and 20%, respectively, in money spent on health between 2004 and 2012.3

Let’s look at how much it costs for a sample of drugs if you live a certain amount of time before the cancer progresses (Table). Mind you, I’m not a medical oncologist, so let me know if these numbers look wrong! 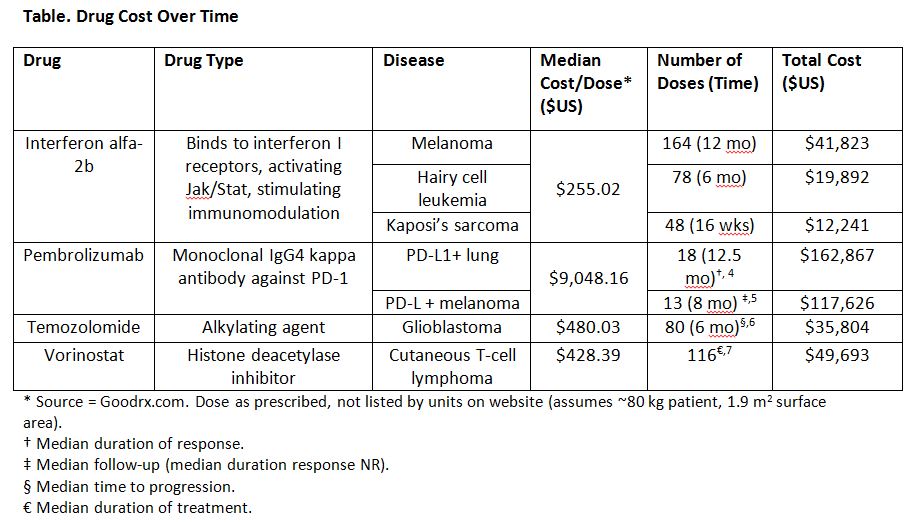 Financial distress for patients can be high, and it now is also linked to higher mortality.8 If drug companies keep raising prices above inflation rates, we must keep talking to our elected officials about reform.

Instead of making designer drugs in generic bottles, drug companies should be able to distribute expensive drugs in accurate amounts. Right now, an estimated $3 billion is wasted because drugs are shipped in cookie-cutter amounts.9Patients and insurance companies pay for excess drugs that are just thrown away.10 The cost of the amount of drugs wasted annually is more than the entire cost of radiation oncology in the United States.

The only cancer drug I order is radium-223, which I inject to treat prostate cancer. Because it’s radioactive, I only order the amount needed for treatment. It’s required because no one wants radioactive drugs floating around putting the public at risk.

Why is it different for chemotherapy or biologic therapy? Excess cancer drugs shouldn’t be dumped; it’s wasteful and potentially dangerous. Instead, drug companies should ship these high-cost drugs in personalized doses based upon what the patient needs, and no more.

Direct-to-consumer advertising has been controversial for decades. Pharmaceutical companies have increasingly targeted patients, rather than doctors, for new drugs dating back to the 1990s.11

Digital video platforms let us skip the Viagra commercials, but social media has created a new area for direct marketing. Whether it’s through Google searches, Facebook ads, or anecdotal tweets, there are new ways to press people’s buttons for emotional decisions. Unfortunately, for people who search for health information online, sicker patients are more likely to make decisions based upon anecdote, not evidence.12

Personalized genetic testing companies are also taking this tactic to the bank. The ancestry company 23andMe decided it was a genomics company before the FDA shut it down. But it still collected enough people’s data to sell their information to pharmaceutical companies,13 data-mining people with smooth talk and limited consent, including minors.14

The FDA shut down 23andMe temporarily, but the bigger issue is that the FDA’s limited staff can’t possibly keep up with the volume of content pharmaceutical companies create.15 Despite FDA guidance for social media use by industry,16 we should seriously consider giving the agency some teeth to enforce penalties for tweets like this one during ASCO’s Annual Meeting:

Jamie Goldfarb is a patient advocate who found strength through the love & support of others. Hear her story #ASCO16https://t.co/z8AK3sqYSG

The emotional video tells a powerful story. Merck has a drug that also treats the same condition, but (of course) provides no data in the tweet! Plus, social media companies want industry advertising to help their own revenues.17 Caveat surfor!

More than 40% of oncologists in Massachusetts have received industry payments, and this number is likely similar throughout the United States.18  But it’s particularly problematic when thought leaders, researchers, or key members of regulatory bodies receive them.

Only 28% of the top academic institutions have institutional conflict of interest policies.19 Of course the issues around financial conflicts need to be highlighted, but there are non-financial conflicts, too, because investigators are biased toward their research and getting positive results.20 Almost two-thirds of key contributors in clinical trials published in the Journal of Clinical Oncology had financial ties to industry.21

Recent research suggests that it’s better now than it was 10 years ago,22 but the more transparency the better. This is something to keep in mind, since many Cancer Moonshot clinical trials panel members have conflicts of interest that include direct industry representation.23

We need transparency beyond clinical trials reporting. Older data suggested 81% of authors for clinical practice guidelines had connections to the pharmaceutical industry.24 And don’t forget the drug approval process—73% of FDA drug advisory committees had at least one member with a conflict of interest, but only 1% of all committee members recused themselves between 2001 and 2004.25

Are we doing any better now?

Clinical trials can’t be done without patients, and hospital institutional review boards (IRBs) are supposed to ensure that trials are done well.  Unfortunately, many trials don’t completely report results. Out of 67 clinical trials checked by the COMPare Trials Project, each trial reported only about 58% of its planned outcomes, then added new ones.26 In another study, adverse event reporting only met adequate quality in 10% of 325 randomized trials.

Conflicts of interest for IRBs may be improving at large academic hospitals, but other hospitals are outsourcing IRBs.27 The financial interests of outsourced IRBs match the drug industry’s goals. More trials open equals more revenue. Hospitals may want to rethink outsourcing IRBs. And maybe the National Institutes of Health should consider whether its new grant policy for multicenter trials will only worsen the problem.28

Clinical trials will have to comply if hospitals and doctors insist. Our standards for quality trials should be high.

6. Pay your taxes, or no public research funding

Pfizer tried to pull a fast one on the U.S. public by planning a reverse merger with Allergan.29 The company could then avoid paying taxes in the United States on its revenue.

Fortunately, that deal was nixed.30 Maybe the National Institutes of Health should require for-profit companies to pay taxes to qualify for public research funding. No government grant support without taxation may help deter future attempts at tax dodging.

7. If you want refunds on research, you should give them to patients

Merck apparently thinks the solution to negative research results is to get a refund. The company wants its money back if it funds research that can’t be reproduced.31

If drug companies only want to pay for positive results, we should expect the same. Merck should give every patient with cancer who progresses on Merck’s drugs a refund. While we’re at it, the National Cancer Institute can ask for any funding back from Merck for failed research that taxpayers funded.

Sound ridiculous? No more than a company expecting only positive results in science.

Drug companies play a key role in improving cancer care. We can debate whether shareholders trump stakeholders, but financial toxicity for patients continues to worsen. Eternal vigilance is the price of liberty from excessive drug costs, and we have an ethical obligation to hold pharmaceutical companies accountable.

I hope pharmaceutical companies will give their side of the story.  What do you think?

If you got to the final point, thank you for reading! From feedback I have heard online, most issues were raised about point #7.

An important distinction, made by Robert West, was to differentiate negative results from reproducible results. You can't control for the former, but you should be able to get the latter. So my description that Merck is expecting a guarantee for 'positive' results is incorrect. I appreciate Merck's willingness to do confirmation studies; apparently many companies don't. And given the issues with research fraud (take a look at the blog Retraction Watch), it's understandable. But instead of asking for money back, it could hold the researchers' institution accountable and deny future research funding. It's more complicated than a simple blog post, so my hope is to stimulate more discussion.