The Landscape of #ASCO20: Evolution and Validation of the Role of Social Media in a New Virtual World

The ASCO Annual Meeting is a major milestone on the oncology calendar for over 40,000 attendees each year. The landscape that emerged in the first quarter of 2020 dictated careful consideration of whether or not it would be feasibly safe to continue plans to convene in Chicago in early June. By mid-April, it became apparent to ASCO, as well as to many other major medical and scientific societies, that upcoming annual meetings would have to shift online and forgo the in-person experience due to the COVID-19 pandemic. On April 24, ASCO announced the virtual format of the 2020 ASCO Annual Meeting, with the Virtual Scientific Program taking place on May 29-31 and the 2020 Virtual Education Program on August 8-10. While it was immediately apparent that many aspects of the in-person experience could not be replicated, out of circumstance arose opportunity for a quantum leap in advances for the use of technology for meetings in 2020, and likely beyond. Likewise, beyond just the hardware and technology needed to make these virtual meetings a reality, online social media platforms—most prominently Twitter—filled the vacuum to facilitate the now fully-online stream of conversation.

Within a relatively short period of time, ASCO pivoted its yearlong plans for a physical meeting to completely virtual. The system nearly “broke the internet” a few times! Members of ASCO’s Social Media Working Group (SMWG) and Featured Voices found themselves in the spotlight to provide resources for conversation. While these resources were not unique to this year’s program, they arguably played more substantial roles than at any previous meeting. Many of ASCO’s social media efforts are guided by a working group which is a subsidiary of the larger Cancer Communications Committee. The Social Media Working Group was formed in 2014 as ASCO’s “social media think tank.” The group puts tremendous emphasis on diversity of opinion and has worked towards increased inclusion of patient advocates, non-physician practitioners, trainees, and multilingual voices. The members of these groups were certainly not alone, as over 8,644 participants including physicians, advanced practice providers, nurses, researchers, and patient advocates filled the social media stream with debates, conversations, and reporting of the latest oncology advances presented online. For the ASCO20 Virtual Education Program that took place in August, there were over 1,600 Twitter participants (data via Symplur).

The number of overall impressions on Twitter generated from the #ASCO20 Virtual Scientific Program was more than double impressions from #ASCO19, despite fewer tweets, participants, and tweets per hour. Symplur, a popular social media analytics platform that analyzes social media chatter for health care-based conferences, generated widely accessible hashtag metrics for these meetings. The Symplur hashtag data from #ASCO19 and #ASCO20, respectively, are shown below. While keeping in mind some substantial differences, #ASCO19 comprised a 5-day conference, while the #ASCO20 Virtual Scientific Program took place over only 3 days. Despite this shorter duration in 2020, the overall number of impressions was higher. Other points to keep in mind include a lack of some social media features that were previously used to complement the in-person experience, including the #ASCOiSpy social media “scavenger hunt” that generated social media posts, the lack of in-person social and networking events or random run-ins (selfies, anyone?), and a general observation of fewer posts from exhibitors and other companies that have held concurrent events in past years. 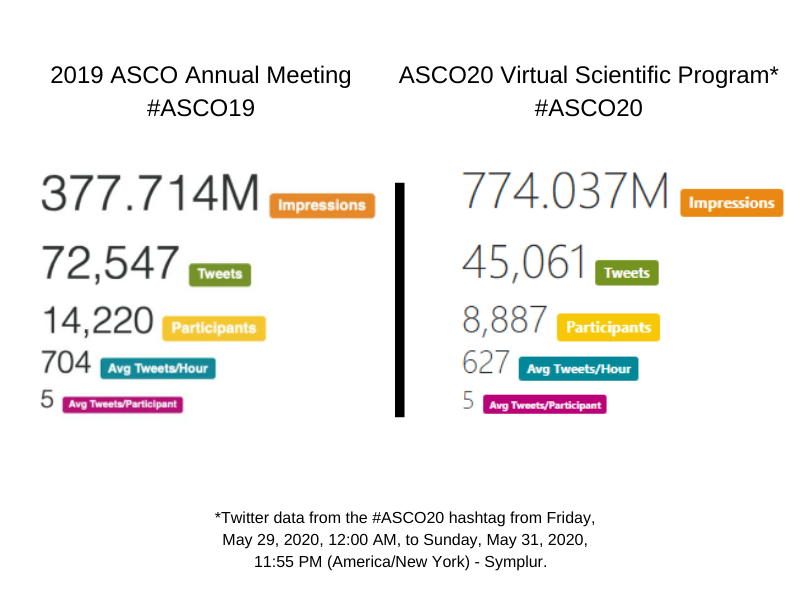 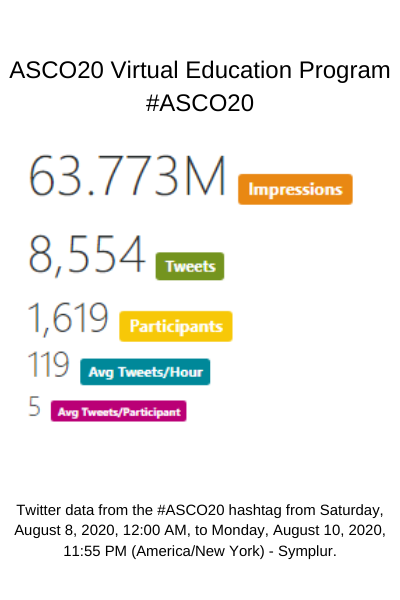 ASCO meeting chatter is predominantly on Twitter, but not exclusively. In advance of the 2018 Annual Meeting, ASCO launched its Instagram account (@ascocancer), which surpassed 1,000 followers by the end of that meeting. As of late October 2020, the account has 13,000 followers. This year, ASCO continued to make innovative use of this platform by streaming multiple Instagram Live conversations over the 3-day period, including discussion of gastrointestinal oncology research developments (spoiler alert and COI: we, @shaalanbegmd and @cancerassassin1, led the spirited conversation on this topic), Eleonora Teplinsky, MD (@drteplinsky) and Don S. Dizon, MD, FACP, FASCO (@drdonsdizon) on breast cancer and gynecologic cancers, and Miriam A. Knoll, MD (@dr.mimi.k) provided a science summary on the final day.

The adoption and rise of Instagram by ASCO is leveraging another popular social media platform that extends the Society’s reach not only to younger generations of trainees (prominently medical students, residents, fellows, and yes, even early-career faculty… and beyond!), but also to international followers, patient advocates, and advocacy organizations that have been leveraging this image-based platform for years.

What does the future hold for virtual meeting technology and its role in future ASCO meetings? Well, while the proof remains to be seen in the years to come, discussion in the Twittersphere made it clear that some implemented advances were not only welcomed, but will be expected to stay. What is clear is that, while the social media and virtual experience cannot and will never fully replace the value of in-person networking that sparks collaboration for advances in our field, the COVID-19 pandemic has forced us, as an entire medical community, to reassess how we can best leverage technology and social media to ensure healthy and robust conversation about the information presented.

These are certainly interesting times, and many aspects of virtual meetings are here to stay. It’s fair to assume that social media is here to stay as well. While the next trendy app may come and go, the conversation will stay alive. It is up to the oncology community to use these forums in an engaging and patient-centric way.

Dr. Lou is an associate professor and medical director of the Clinical Trials Office–Solid Tumor Unit of the Masonic Cancer Center at the University of Minnesota in Minneapolis. He is active on several social media platforms including Twitter (@cancerassassin1) and Instagram (@cancerassassin1). Disclosure.

Dr. Beg is an associate professor and director of GI Medical Oncology at the Simmons Comprehensive Cancer Center at UT Southwestern Medical Center. He serves as chair of the ASCO Social Media Working Group for the ASCO Cancer Communications Committee and is associate editor for the Gastrointestinal Cancers Symposium Daily News. Follow Dr. Beg on Twitter @ShaalanBeg. Disclosure.