Home Is Where the Heart Is

I consider myself very lucky that I was able to fulfill my dream of being a doctor and I would do it all over again if I was asked. But my education in medicine led me further away from home, and instead of returning, I chose a path in academics that saw me establish a professional and clinical presence far from the South Pacific. Mine is not a unique experience; I’ve met many colleagues who grew up far from where they ultimately practiced, and I’ve always yearned to learn more about their own journey. I invited Dr. Philippe Aftimos to share his with me. Philippe is a medical oncologist and currently the Clinical Trials Development Leader at Institut Jules Bordet in Brussels. I asked him to tell me about his journey to Brussels.

“After finishing medical school in 2006 at the Saint Joseph University in Beirut, a hybrid between the American and the French systems which lasted 7 years, we were required to declare a fellowship during our second year of residency, and I chose hematology-oncology. The days were intense but I certainly gained a lot of clinical experience. My mentors gave me the opportunity to travel and I took advantage of it; I attended the ASCO Annual Meeting in Chicago and the ESMO World Congress on Gastrointestinal Cancer in Barcelona;  I spent one month with the Leukemia Department at MD Anderson Cancer Center in Houston and a separate month with the breast cancer service at Memorial Sloan Kettering Cancer Center (MSKCC). Almost all fellows spent their last 2 years abroad, and my mentor chose Institut Jules Bordet for me, where I could work with Professor Martine Piccart in breast oncology and Professor Ahmad Awada in new drug development. I arrived in Brussels in September 2010 with the initial plan of staying 2 years. I had to adapt to a different way of working. We would still round on our inpatients, but afternoons were spent attending seminars, and afterwards, they allotted us protected time for reading and research.” 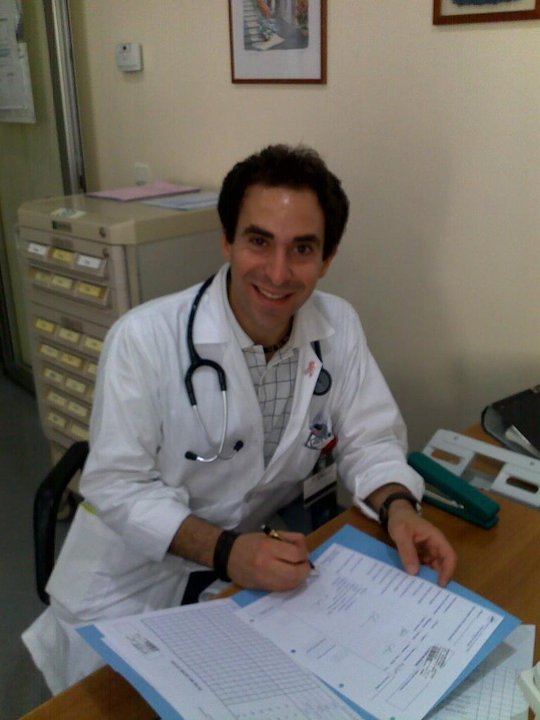 Dr. Aftimos on his last day as a resident at the Hôtel-Dieu de France University Hospital in Beirut before leaving for Brussels.

I still remember growing up on Guam, aspiring to study far away, aiming to become a doctor; it was a dream I shared with my parents. My parents talked to me often about “when” I would come back and practice, even so far as to discuss “where” my practice might be located.  But I was drawn towards academic medicine and decided to make a go of it. There was no medical school on the island, no residencies or teaching hospitals. People with cancer often left the island for treatment as the services were limited. Making a go of academia meant making a choice not to return; my parents were sad that I decided to stay in the mainland, but they remained quite proud.

Dr. Dizon with his extended family in Honolulu in 2018.

I wondered about Dr. Aftimos’ decision to stay in Brussels.

“I was offered a permanent position at the end of this fellowship year, and I faced the dilemma of staying in Brussels versus going back to my homeland. The culture of clinical research was lacking in Beirut, at least in my institution. Furthermore, Lebanon was not an attractive setting for drug development.

“Looking back, the possibility of a career in research and academia was an important factor but was not the only one that swayed my decision. Health care is not universal in Lebanon despite the presence of a social security system. Indeed, only those with jobs have social security which means a large part of the population does not. Furthermore, the budgets of the social security are always underfunded and, as a result, there is a limited number of hospital beds, scarce drug supplies, and long waiting times for procedures. The best option is private insurance, an option only afforded to only a few. Poverty is a serious public health threat.

“The Ministry of Health is able to provide some oncology drugs for free, but most are too expensive. As such, patients and their families face huge stress and administrative burdens before getting access to everything from to a hospital bed to medications.  Despite this, patients in Lebanon have access to excellent care due to very skilled physicians who, like me, specialized abroad, although there is still a lack of support for palliative care and medical decisions are still very much driven by the physician.

“In Belgium, health care is universal. All citizens and residents get equal access to care and the health care professionals take care of all the administrative burdens cited above. Palliative care is very well developed, including the possibility of hospice care at home. One example that illustrates the difference in the health care system between my two countries is discharging a patient from the hospital. In Beirut, physicians prepared the billing file, which had to be completed before the patient left. In Belgium, the patient can be discharged whenever he or she is ready; there is no paperwork to stop them.” 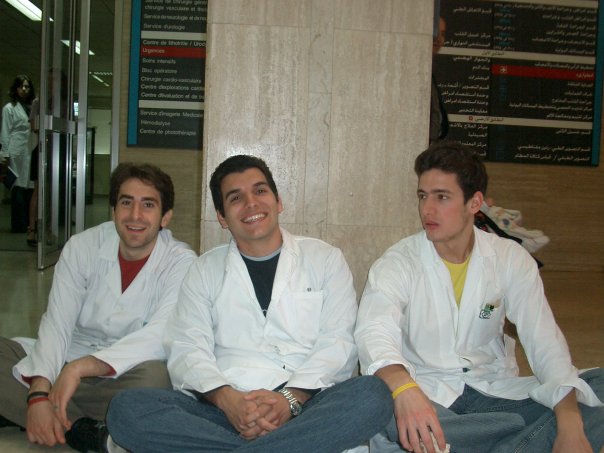 A symbolic protest of interns at the Hôtel-Dieu de France University Hospital in Beirut; Dr. Aftimos is wearing the red t-shirt.

It seemed that we both were immersed in incredible institutions for fellowship. For me, the opportunities afforded to me at MSKCC were instrumental in shaping my desire to pursue an academic career. My mentors were so supportive, opening doors to the cooperative groups and to national organizations, passing on opportunities to speak nationally and internationally, and helping me shape clinical trial concepts. I wondered how Dr. Aftimos decided on his own career path.

“Arriving in a new country with not a lot of acquaintances provided me with a lot of free time to read, learn, and write. Research was never an interest while I was in Lebanon; we focused on ensuring quality cancer care by applying international guidelines and implementing recommendations from respected groups, like ASCO and ESMO. Indeed, I had only written a couple of case reports while in Lebanon.

“The ‘light’ afternoons in Brussels allowed me to publish a review on renal cell carcinoma, followed by another one on eribulin. My first project was a retrospective analysis of patients with metastatic breast cancer treated with eribulin. The grain of clinical research was planted. In Brussels, I was crossing the path of patients hospitalized in the ward for clinical trial purposes and I took an interest in the study protocols. I soon was aware that the Institut Jules Bordet had taken part in the phase I trial of docetaxel and that the pivotal HERA trial of adjuvant trastuzumab was thought up and initiated within these walls. Beyond applying guidelines, I was facing the chance of participating in the research projects leading to them. I was offered the opportunity to work in clinical research for the second and supposedly last year of my fellowship. I started shadowing the phase I nurses and soon after I became a sub-investigator in different clinical trials, seeing patients and participating in conference calls.” 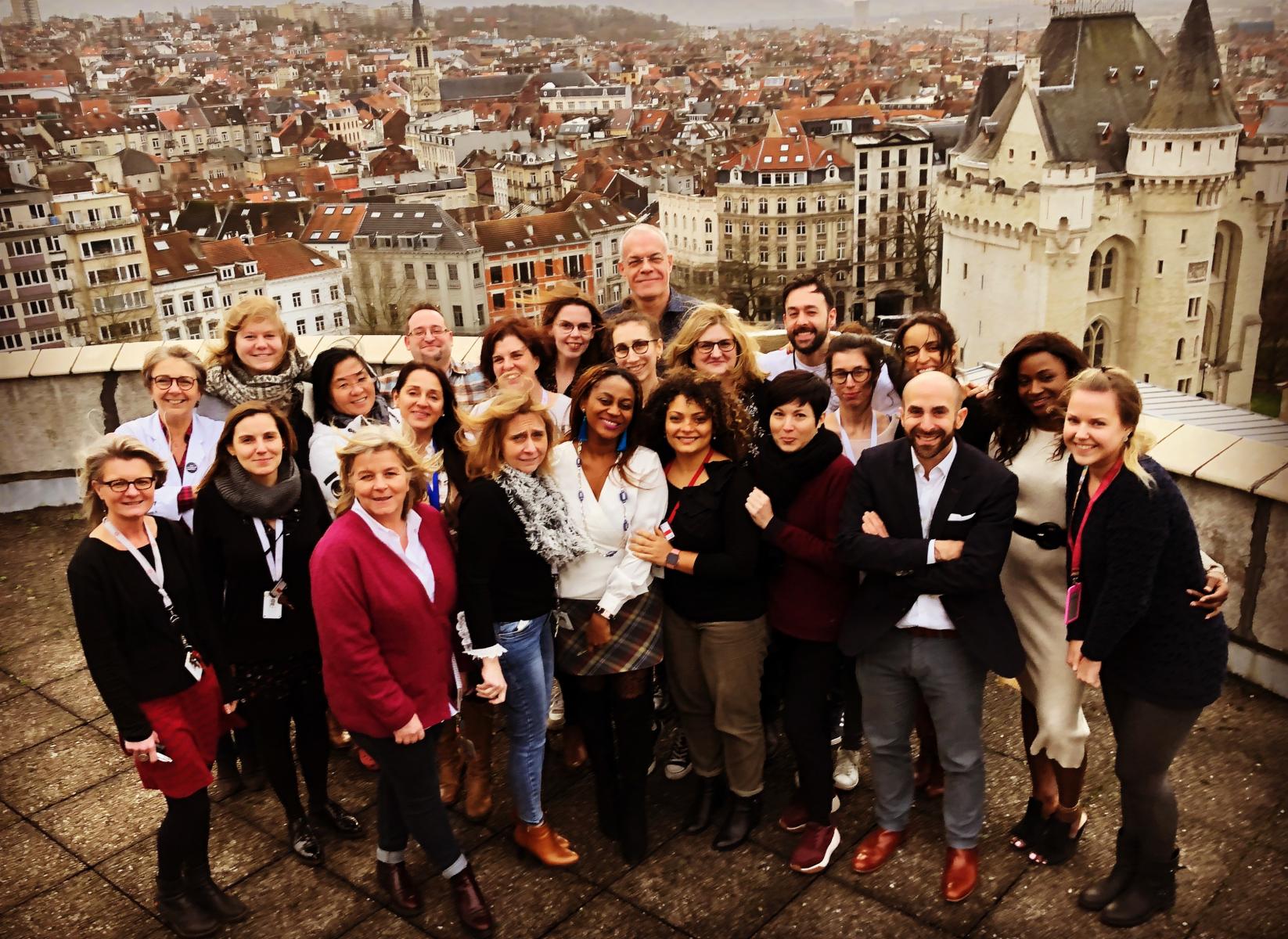 Dr. Aftimos with the clinical research team he leads, on a windy and rainy day in Brussels.

Looking back, I am in a truly wonderful position of being satisfied with the pathway my career has taken and can honestly say that I have no regrets. If anything, being so far from home makes me so appreciative of where I came from, and the joy I feel when I visit Guam is unparalleled. As my family has grown it’s important for them to know about my island, to learn about it, and I am happy they’ve gotten to visit it. 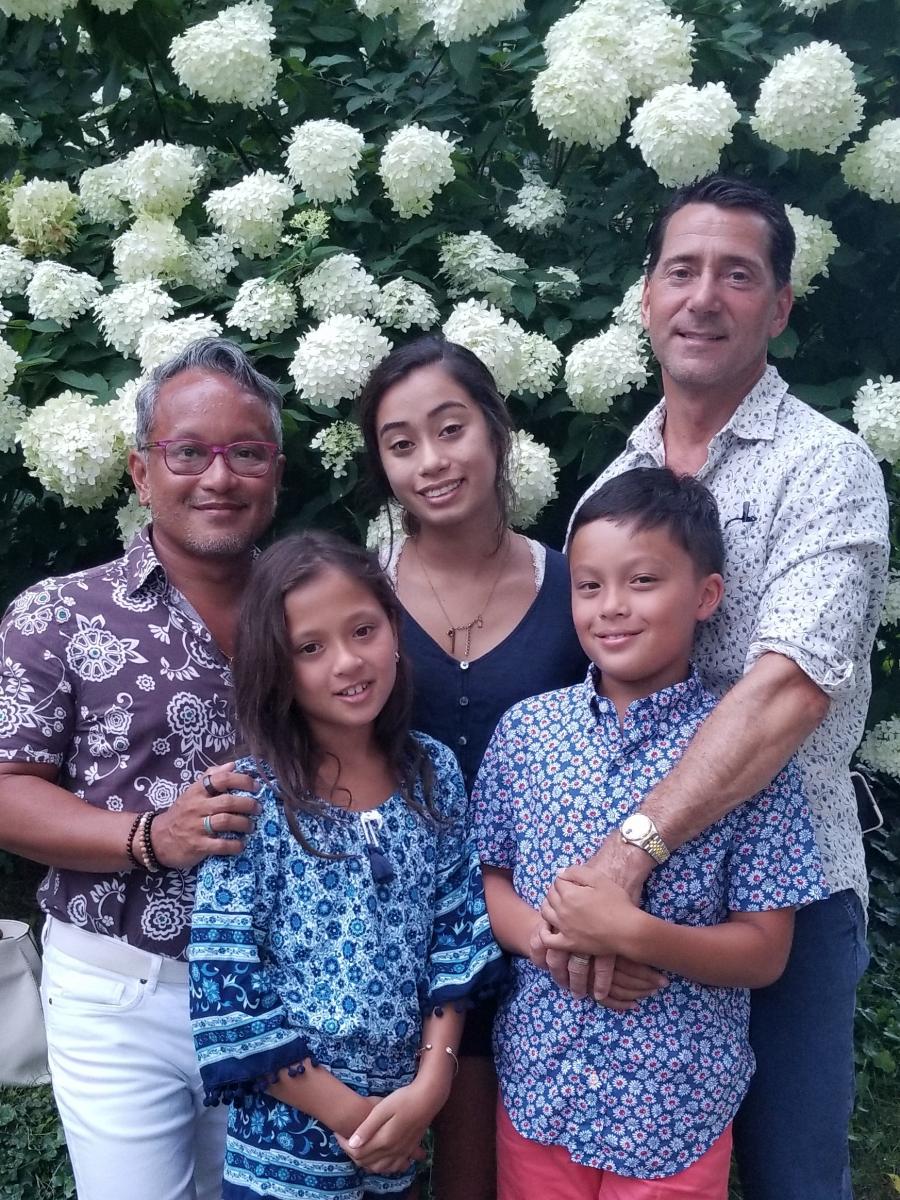 It’s weird to think that I’ve lived my entire adult life on the East Coast of the United States, yet I still feel very much like an island native, and I do still yearn to go home. I wondered how Dr. Aftimos felt.

“It is true that I miss dearly the 300 sunny days a year in Lebanon and the mildness of the Mediterranean Sea. I also miss my family, since both my parents and one of my sisters live in Lebanon. I have a family of my own in Brussels, my wife and my 4-month-old son. Despite many doubts and nostalgia, it is probable that my current career in clinical research and academia, with ongoing projects and others in preparation, will continue to prolong my stay in Brussels.” 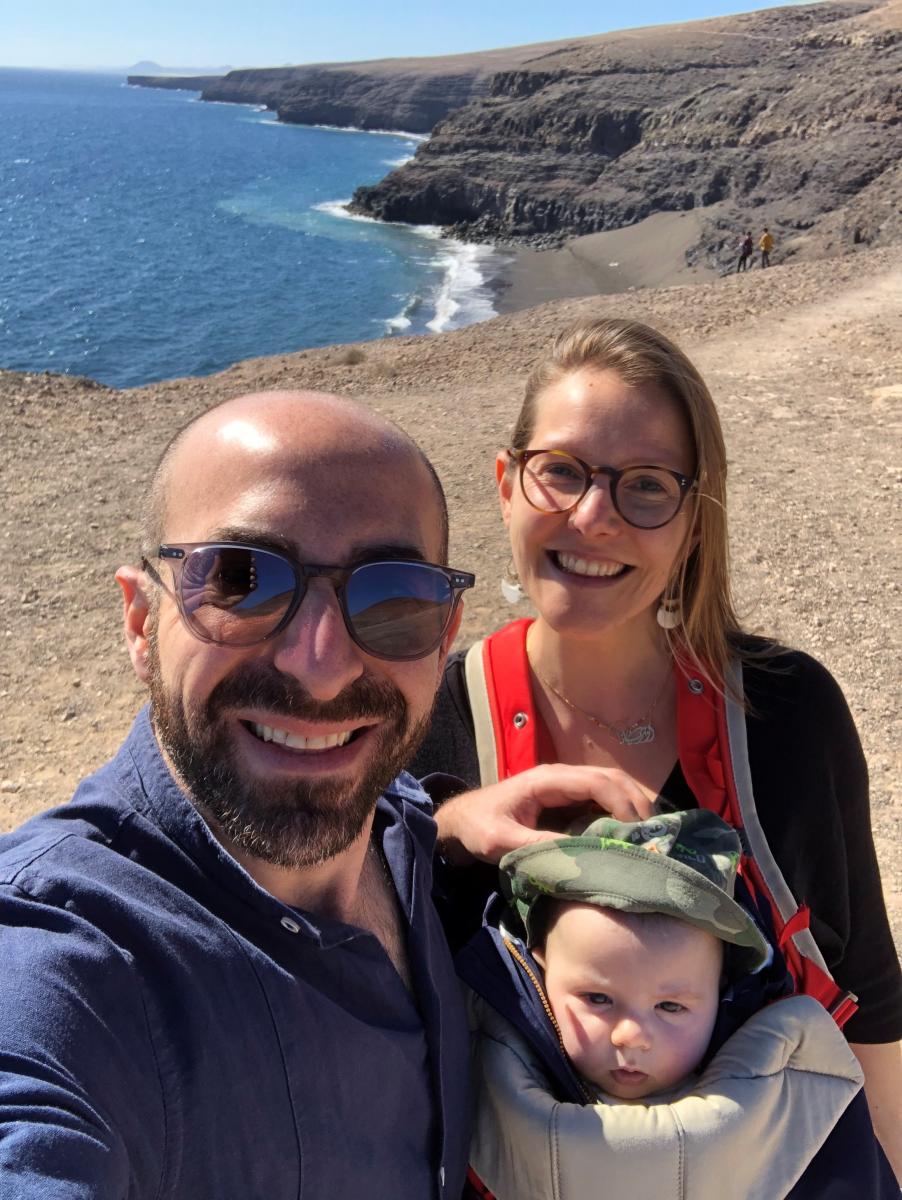 Dr. Aftimos and his wife on their first vacation with their new baby. 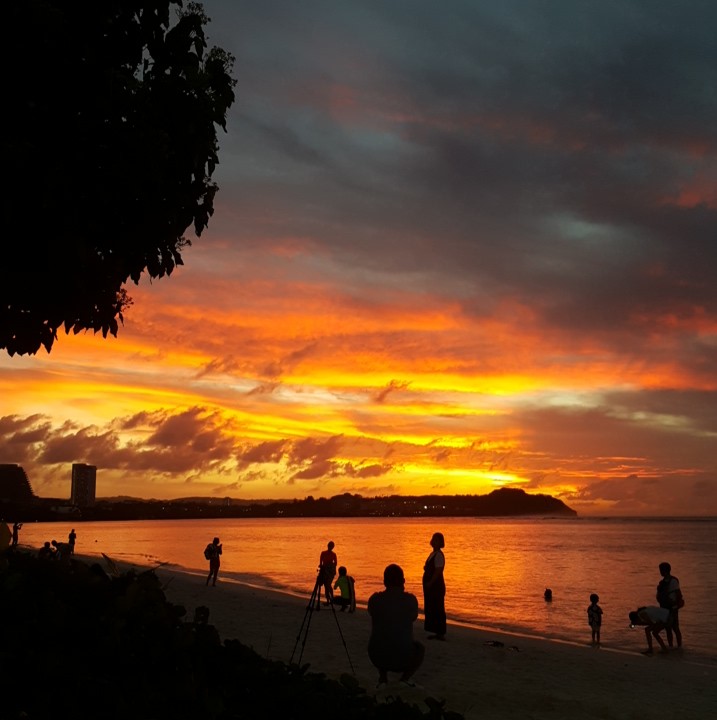 All photos courtesy of Dr. Aftimos or Dr. Dizon.