May 25, 2011
I have been working on my Presidential Address in recent weeks, an address that I wanted to end by looking back to the moral center of our profession. In doing so I came across Francisco Goya’s Self-portrait with Dr. Arrieta, which resides in the collection of the Minneapolis Institute of Arts. 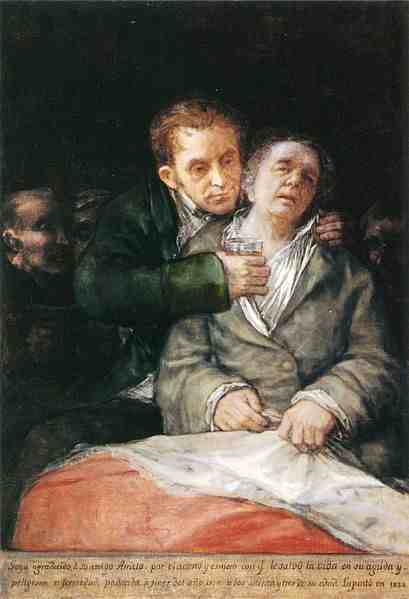 The painting is wonderful. I have been a Goya fan ever since I visited the Prado in Madrid the summer I graduated from college (don’t ask—a long time ago, and my hair was darker and longer). I remember coming into the room where his great Tres de Mayo hung, and being captivated by its raw power and humanity. Goya’s great works, like Tres de Mayo and his etchings regarding the occupation of Spain by France in the Napoleonic Wars, tend to be dark, serious works. Goya grieves for humanity and is bitter about the way in which the powerful and vicious brutalize the weak and poor. He doesn’t except doctors from this criticism: one famous print shows a physician with the head of an ass.

But Self-Portrait with Dr. Arrieta is something quite different, and quite beautiful. A late painting, created in 1820 shortly after a life-threatening illness, it shows Goya and his physician. Goya is unsparing with himself; he looks awful. Not just old, but weak, miserable, suffering, and clearly dying. He is surrounded by darkness, a darkness that seems poised to claim him. He clutches a sheet, and you sense he is barely holding on to life.

Leaning forward, a glass of medicine in his hand, and holding Goya up, is Dr. Arrieta. He has a beautiful face. I have never seen compassion captured so well, outside perhaps of Michelangelo’s Pieta. Goya’s faces are always brilliant, but this one is exceptional: kind and thoughtful, unpretentious, decency incarnate, standing between his patient and that ultimate darkness. Most of Goya’s works from this period are consumed with human evil and stupidity, but this is a painting that says there is goodness and intelligence in the world.

Down at the bottom of the picture the artist wrote an inscription. It includes the words which, in translation, read “Goya gives thanks to his friend Arrieta: for the skill and care with which he saved his life during his acute and dangerous illness.” His friend. Skill, and care. Technology always changes. We might not even recognize many of the medical devices of that period. Arrieta has no PET/CT, no antibiotics, not even a stethoscope (it had not yet been invented in 1819). He’s holding nothing but a glass of some unknown medicine. Yet I bet that if you showed the picture to 100 people, 99 would identify it immediately as a doctor and his patient. Goya goes to the heart of that relationship: skill, and care. Maybe some day technology will improve to the point where we will be nothing but technicians to our patients, body mechanics, our interactions carrying the same emotional meaning as a brake job. But I doubt it. And Goya’s magnificent painting tells us why: skill, and care.

Dr. Eugenio Garcia Arrieta, by the way, was a physician-scientist. After saving Goya’s life, he travelled to Africa to study bubonic plague. Goya lived another eight years, turning out several late masterpieces, this self-portrait among them.

Well, I'm embarrassed by my poor memory, once again. On rechecking the facts, Laennec invented the stethoscope in 1816. The invention may or may not have made its way to Madrid by 1819, when Goya was ill. My apologies for the error. I don't think PET/CT's had been invented yet, but am willing to be corrected by anyone with a superior knowledge of medical history.

What a great way to summarize the essence of what we do. Thanks for all the great work you have done for all of us as President of ASCO.