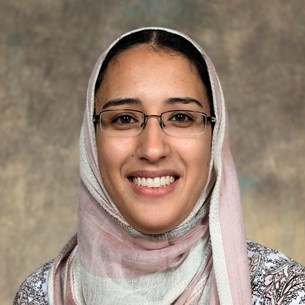 “We're so quick to cut away pieces of ourselves to suit a particular relationship, a job, a circle of friends, incessantly editing who we are until we fit in.” – Charles de Lint

I remember carefully enunciating words when I was 12 years old, practicing them repeatedly alone, attempting to mimic my classmates’ accents. I pored over one book after the next, adding words to my vocabulary, taking note of slangs and expressions that could help me fit in as I learned English for the first time among native speakers. In typical teenager fashion, I was bullied mercilessly over my thick Middle Eastern accent, which stuck out among my peers. Since then, I have smoothed and polished my words over the ensuing years and whittled down traces of the accent that still lingers.

More than two decades later, I continue to sculpt away, now at edges of my personality and individuality to conform to the “norm.” Many judge my successes and failures only on the weight of my heritage: that I am a Muslim woman from the Middle East.

After 10 years of living in this country and officially becoming a U.S. citizen after years of work visas, I have learned all the different ways one could be told that they don’t belong.

There are the abrupt direct comments:

Then there are the insidious remarks which register later, sneaking up unexpectedly, as you pause mid-sentence, wondering how the conversation had veered into that direction:

And finally, there are comments from people you once turned to for support, only to realize the vast gap that exists between your reality and their perceptions:

As a trainee, I reached out to a supervising attending after an especially difficult encounter with a patient who made multiple racist comments. The attending responded, “If you expect to work as a physician here, then you need to accept that some patients don’t like people who look like you. You simply must work extra hard to prove to them that you are a good doctor, and to earn their trust.” He followed that up by writing in my evaluation that “this trainee needs to improve her interpersonal communication skills and not complain about normal conflicts that arise in a high stress environment.”

I look around me and I don’t see people who look like me in leadership positions or on podiums during national conferences. I struggle to find role models, mentors, or sponsors who can relate to the intersectionality challenges of both a minority and gender tax. When I applied for jobs, I sat down and excluded states where I didn’t feel I would be accepted simply based on my background. I was told during a job interview, “You probably won’t fit in well here as our patients are not used to seeing someone who looks like you.”

In her book The Gifts of Imperfection, Brené Brown wrote, “Fitting in is about assessing a situation and becoming who you need to be to be accepted. Belonging, on the other hand, doesn’t require us to change who we are; it requires us to be who we are.”

But how does someone like me achieve this belonging, when my simple existence in certain spaces offends some, enrages others, and brings out many prejudices and stereotypes? There are accusations of “taking jobs from the rest of us” and demands to “go back to where you came from.” It is human nature, I suppose, to pass snap judgements and to “other” those who look and sound different from the cultural norm. As a result, I code-switch constantly, and carefully observe people around me to pick up on subtle cues of who I need to be at every given moment during professional encounters and during many social interactions.

Some days, I reflect on how my background must add value, and feel certain that many people surely judge me based on my character and work ethic. Other days, I turn inwards, and find fault within myself for my perceived shortcomings: not being likable enough, not working harder at fitting in. Then there are days when I simply sit down in exhaustion from a thousand papercuts of offhanded remarks and the weight of endless assumptions and exclusions, and vow to never be one of those bystanders who squirm uncomfortably then simply walk away.

So, to those of you who are othered and excluded in all those subtle and not-too-subtle ways, let me tell you this…

I wish you gentler and kinder days.

I wish you moments of joy and meaningful interactions, where you can simply be your authentic self.

I wish you bystanders who acknowledge the wrongs and address them in real time.

I wish you work environments that value your unique background and input and allow you to thrive.

I wish you a community of people who rally around you and uplift you on tougher days.

You matter. You belong. Your presence truly makes your corner of the world a little bit better.

Subscribe to this column
Oct 20, 2022
On Belonging
Jun 30, 2022
Fostering a Collegial Culture as a Consultant
Feb 08, 2022
What Would You Include on Your CV of Failures?
Nov 24, 2021
Giving Thanks During a Season of Change and Challenge
See all Posts